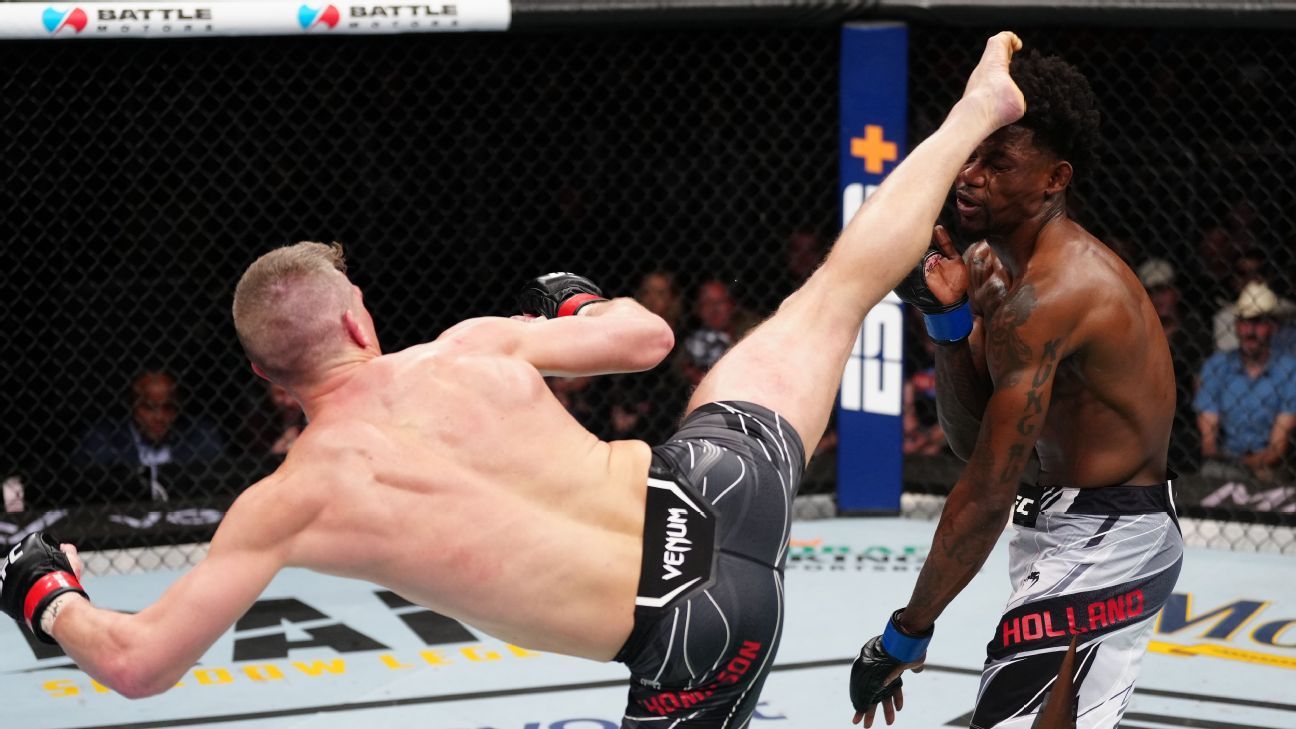 Stephen Thompson proved he still has championship aspirations after a dominating performance over Kevin Holland in the main event of UFC Fight Night, but others in Orlando, Florida, found their way to shine as well. Brett Okamoto, Marc Raimondi and Jeff Wagenheim look at the biggest moments from an action-packed event in Florida.

“Wonderboy” isn’t much of a boy anymore. Actually, he hasn’t been for quite some time. But this version of Stephen Thompson, as the flashy striker approaches his 40th birthday, still has quite a lot of value to the UFC.

On Saturday night in the main event of UFC Orlando, Thompson beat Kevin Holland via fourth-round TKO in one of the year’s best fights, a rollicking, roller-coaster affair that saw both men get hurt and battle back until the slick, crafty Thompson just became too much on the feet for Holland, who injured his hand early. Holland’s coach Bob Perez waved things off before the fifth and final frame.

Thompson threw various techniques with his legs, from hook kicks to crescent kicks to liver kicks. He might have even hit Holland with Shawn Michaels’ “Sweet Chin Music” at one point. It was hard to keep track. Holland, meanwhile, cracked Thompson in the first round with a piston-like right cross and kept things entertaining throughout, despite the hand issue.

All of this is to say that the word of Thompson’s imminent demise was highly overstated. In fact, it’s really all about matchups. If Wonderboy can continue putting on performances like this, there’s no reason he shouldn’t be in UFC Fight Night main events like this or on pay-per-view main cards a few times a year. Thompson did say he still feels like he’s 25 years old in his postfight interview, after all. 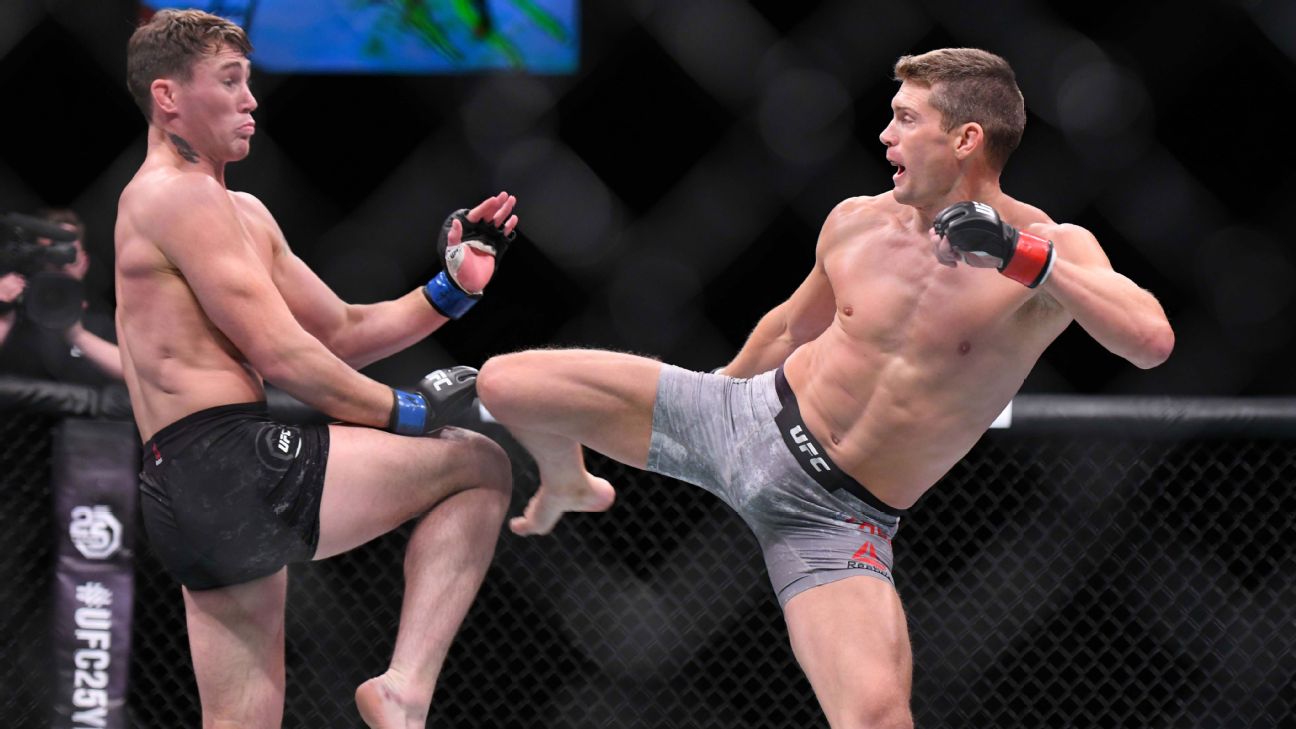 All fights from UFC Fight Night: Thompson vs. Holland will be available to watch on ESPN+.

The trick is finding the right opponents. Wonderboy versus Holland was a master stroke from matchmakers Sean Shelby and Mick Maynard. Holland always comes to fight, never wants to wrestle or grapple, and is all too willing to get into a brawl. Unfortunately for Holland, he was the exact kind of opponent to not only rejuvenate Thompson, but he was the first Wonderboy foe to succumb to a KO/TKO since Johny Hendricks (remember him?) in 2016.

A case can be made that Thompson has vaulted himself back into title contention with this victory. Maybe — but what’s the point? The top of the welterweight division is filled with oppressive wrestlers like Kamaru Usman and Colby Covington and Khamzat Chimaev. Thompson has already lost to Belal Muhammad and Gilbert Burns, both of whom who succeeded in grinding Wonderboy out with wrestling and grappling. And Usman, Covington and Chimaev are all better wrestlers on paper than Muhammad and Burns.

No, the path forward for Thompson should be a fun one, like this fight against Holland. There are plenty of up-and-coming strikers the UFC can throw at Wonderboy to see if they can hang. Who wouldn’t want to see Thompson going up against a Michel Pereira or Jack Della Maddalena? Heck, why not book a bout between Wonderboy and Philip Rowe, who had a highlight-filled win over Niko Price on Saturday night? Prospects like Ian Garry and Michael Morales could be waiting in the wings for an opportunity, too.

If Thompson can stave off a couple of those young, hungry lions, you can thrust him back into a big contender fight. But for the time being, Wonderboy should not be put within 100 feet of a wrestler. Feed the man strikers and watch memorable performances like the one Saturday night continue to occur.

Thompson is affable, likable, a fan favorite and, when faced with the right foe across the Octagon, can be one of the most entertaining fighters in the world. He’s still one of the best welterweights. But is throwing him in against a top-five contender the best use of a nearly 40-year-old Wonderboy? Probably not.

Let’s keep things fun. And on the feet. Thompson will knock someone out with Sweet Chin Music one of these days.

Whether it’s Conor McGregor or not, the UFC should find a plan for RDA

Okamoto: Look, I have no idea if McGregor will take the bait on Rafael dos Anjos‘s callout. No one does. His future is as unpredictable as it comes. Would I like to see him fight dos Anjos in July? Yeah. Who wouldn’t? And it was a smart call out by dos Anjos. A genuine, shoot-your-shot kind of thing, you know? But trying to rely on a McGregor fight is risky business, and I would encourage dos Anjos to form a Plan B.

I will admit, I don’t know what Plan B is. We’ve already been here with dos Anjos testing welterweight. He had some success there years ago, but came up short when it was time to run into guys like Leon Edwards, Kamaru Usman and Colby Covington. Those are difficult matchups for him. And even after Saturday, he spoke about the physical strength of Bryan Barberena, and told me he’s 38, he doesn’t think he’ll be adding a lot of muscle mass any time soon.

Is his future a welterweight title run? We can try it, but it doesn’t add up. But back at lightweight, dos Anjos has lost his footing a bit in the loss to Rafael Fiziev in July. He’s not crazy past his prime though, and he has earned the right to not just get thrown the next up-and-comer for the rest of his career. I hope the UFC can bring him in and discuss the next couple of years of his career and find a solution that makes sense and has direction.

Philip Rowe was arguably the biggest winner in Orlando

Okamoto: I’m not kidding. On a card that was filled with potential breakout performances and memorable upsets, Rowe stood out to me. I find myself a big believer in his potential walking away from this weekend. He told me after the fight that he’s never been able to show his full arsenal in a fight, and I believe him. He’s trained with the likes of Alex Pereira, Glover Teixeira, Ronaldo “Jacare” Souza and Rodolfo Vieira. His relationship with his coach Julian Williams is rock, rock solid. Outside of the cage, he has a lot of charisma and intelligence.

As far as what he wants next, he said he wants a better contract and then he’ll be more than happy to accept the most challenging fights in the division. Again, that’s a smart stance to take.

Believe me, the more people see and hear from Rowe, the more they will like him. He did miss weight for the second time in his UFC career this week, which he’ll need to fix, but he told me it was more of a time management issue than a long-term problem with the weight itself.

Sergei Pavlovich shakes up the heavyweights with KO of Tuivasa

Wagenheim: In just 54 seconds, Sergei Pavlovich knocked down Tai Tuivasa three times, bloodied his face and finished him via knockout. Then the 30-year-old Russian walked out of the Octagon and did not drink an adult beverage out of a shoe. The guy’s only gimmick, apparently, is throwing a scare into the entire UFC heavyweight division.

Pavlovich moved to 17-1 with his fifth straight victory, all by first-round knockout, the past two coming within the fight’s first minute. Despite his short time in the cage, Pavlovich showed both on Saturday night, and in his 55-second TKO of Derrick Lewis in July, that he’s no brawler. His dangerousness is not just about offense.

Against Tuivasa, Pavlovich had a 23-2 edge in significant strikes, making Tuivasa whiff on eight of the 10 big, winging punches he threw on his way to getting KO’d. Pavlovich utilized his 84-inch reach well. And while it might seem silly to say this following such a quick finish, Pavlovich exhibited the kind of patience that can make a difference in a weight class where anyone can have his lights turned out in a millisecond.

This guy has what it takes to pose problems for anyone in the top tier of the big-boy division, including his fellow knockout artist Francis Ngannou, the champ. Pavlovich has shown himself to be as technical a striker as Ciryl Gane — just with more power. That’s a combination that’ll make fans forgive him for not having a trademark celebration on his way out of the cage after starching another opponent.

Jauregui can be UFC’s next Mexican star

Yes, it’s early. She only has two UFC fights and is just 23 years old, but she’s every bit the prospect at that age that any of the above were. Jauregui won her debut in August against Iasmin Lucindo in a barn burner. On Saturday, she rallied back from getting dropped in the first round to finish Istela Nunes via second-round TKO.

It’s not just that she won Saturday, either. It’s how she won. Have you heard of “Mexican style” in boxing? Jauregui fights like that. She’s constantly aggressive, pressing forward, throwing hard shots with every limb. Nunes had success countering in the first round, but Jauregui made some adjustments in the second and took the fight to Nunes. She dropped her three times in the round and finished with some ruthless, violent ground and pound.

Jauregui has the kind of motor, intensity and ruthlessness you don’t often find in the lighter weight divisions. She’s straight up violent.

The question moving forward is how quickly the UFC will push Jauregui. The promotion is set to make big moves in Mexico in 2023, with rumors of a big event in the country and ground being broken on a UFC Performance Institute in Mexico City. With the likes of Moreno, Aldana, Rodriguez and Grasso — all of whom are in championship or contender slots moving into the new year — the UFC has an arsenal of Mexican fighters to showcase in its next trip south of the border. Jauregui needs to be spoken about in that conversation now, as well.