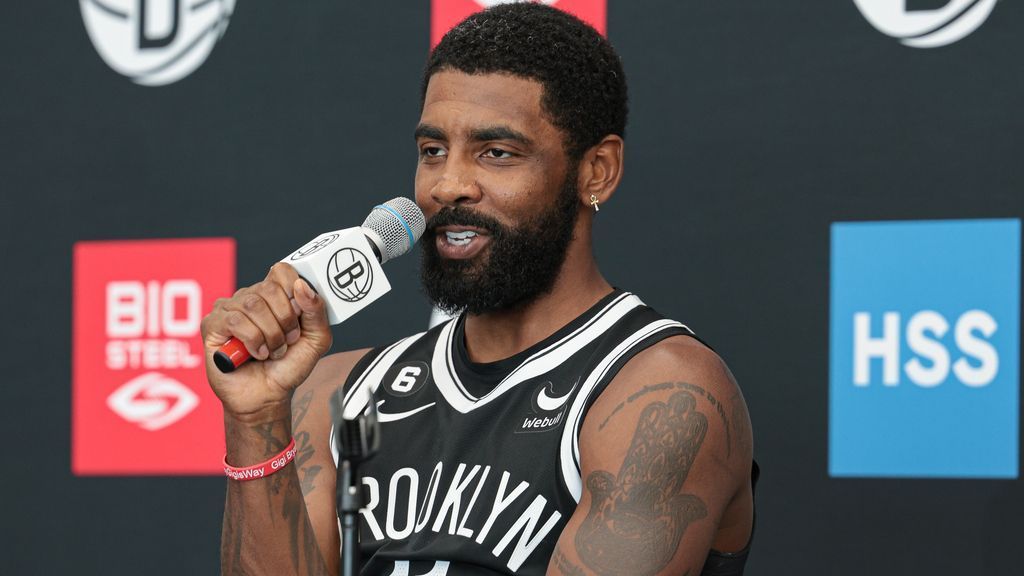 NEW YORK — Brooklyn Nets guard Kyrie Irving says he turned down a four-year extension prior to the 2021-22 season because of his decision not to get the COVID-19 vaccination.

“I gave up four years, 100-and-something million deciding to be unvaccinated and that was the decision,” Irving said during Nets media day on Monday. “[Get this] contract, get vaccinated or be unvaccinated and there’s a level of uncertainty of your future, whether you’re going to be in this league, whether you’re going to be on this team, so I had to deal with that real-life circumstance of losing my job for this decision.”

Irving, who is not vaccinated against COVID-19 and was forced to miss home games in Brooklyn until late March because of a New York City vaccination mandate, opted into the final year of his contract, a player option worth $36.5 million, prior to the season. The 30-year-old said he felt the decision whether to get vaccinated was like “an ultimatum” from the organization, in regard to his contract.

Irving said he was hopeful that he would have the contract terms set prior to last season.

“We were supposed to have all that figured out before training camp last year,” Irving said. “And it just didn’t happen because of the status of me being vaccinated, unvaccinated. So, I understood their point and I just had to live with it. It was a tough pill to swallow, honestly.”

For his part, Nets GM Sean Marks pushed back on the notion that Irving was given an “ultimatum” regarding his contract.

“There’s no ultimatum being given here,” Marks said. “Again, it goes back to you want people who are reliable, people who are here, and accountable. All of us: staff, players, coaches, you name it. It’s not giving somebody an ultimatum to get a vaccine. That’s a completely personal choice. I stand by Kyrie. I think if he wants, he’s made that choice. That’s his prerogative completely.”

Marks acknowledged that it was ultimately New York City’s vaccination mandate, coupled with Irving’s anti-vaccination decision, that stalled conversations about the future.

“So two summers ago, that was pre-citywide, statewide mandates that went in,” Marks said. “So once the vaccine mandates came in, and we knew how that would affect [Irving] playing home games and so forth, that’s when contract talks stalled. So it didn’t get to [a point], ‘Here’s the deal, now take it back.’ That never happened.”

Marks said that while contract discussions about Irving’s future broke down again this summer, he is confident that Irving is fully committed to being a Net moving forward.

“At the end of the day, we’re happy that Kyrie is back here,” Marks said. “I’m listening to the press conference he had this morning and my takeaway from that is that he’s committed. He understands that in order for him to be a free agent and get what he rightfully wants, he’s going to have to show commitment out there. We’re happy to support him in any possible way throughout the season to make sure that he’s healthy and ready to go.”

Irving said that while he understood where the organization was coming from after the season, he was frustrated by the fact that his decision not to get vaccinated “came to be a stigma within my career.”

“I understood all the Nets’ points,” Irving said. “And I respected it and I honored it, and I didn’t appreciate how me being vaccinated, all of a sudden, came to be a stigma within my career that I don’t want to play, or I’m willing to give up everything to be a voice for the voiceless. And which I will stand on here and say that, that wasn’t the only intent that I had, was to be the voice of the voiceless, it was to stand on something that was going to be bigger than myself.

“And I was going to understand probably far into the future … there was a level of uncertainty of what this was going to look like of me coming back. And I had questions, they were answered truthfully. And that’s all I needed. And now it’s just having the support around me and giving the support to my teammates.”

As Irving’s future within the organization continues to unfold, star forward Kevin Durant spoke publicly for the first time about his own eventful summer in which he requested a trade, requested for Marks and coach Steve Nash to be fired, and then, ultimately, decided to stay with the Nets.

“There was a lot of uncertainty around our team last year,” Durant said. “I committed to this organization for four years last summer with the idea we were gonna play with that group that we kind of went on that little run to the second round [in the 2020 playoffs]. I felt like another year of that, us being healthy — we were building something towards the future.

“Then as the season went on, you seen what happened with our season, guys in and out of the lineup, injuries, just a lot of uncertainty, which built some doubt in my mind about the next four years in my career. I mean, I’m getting older and I want to be in a place that’s stable and trying to build a championship culture. So I had some doubts about that. I voiced them to [owner] Joe [Tsai], and we moved forward from there.”

Durant said he wasn’t “disappointed” or surprised that he was still in Brooklyn.

“No,” Durant said. “I know I’m that good that you’re just not going to give me away. So that’s one thing I did appreciate about Sean and Joe [they said]. ‘You’re too great for us to give you away.’ Just that easy, that simple. So, I get that. I know who I am.”

Durant also wanted to set the record straight on what he perceives is his own place within the organization, saying he can “only control my job and my job is to be a player.”

“I’m not the liaison between Kyrie and the organization,” Durant said. “I always told them that. I always told Sean and Kyrie y’all gotta build your relationship how y’all do it. Because everybody’s separate, everybody’s different, you approach each player differently.”

Durant said the Nets could have fought harder through adversity down the stretch of last season when he was out with an injury, noting that that’s what championship-caliber teams do.

“When I went out with the injury, we lost [11] in a row,” he said. “And I’m like we shouldn’t be losing some of these games that we lost, regardless of who’s on the floor. So I was more so worried about how we’re approaching every day as a basketball team. And I felt like we could have fought through a lot of stuff that I felt held us back. Championship teams do that. You’ve seen Steph Curry and the Warriors, he was injured going into the playoffs. Their team still fought and won games. Luka [Doncic], he was hurt and their team still fought and won games.

“I felt like we had enough talent to do that. And that’s what was the most about in my mind is that when adversity hit can we keep pushing through it? I’ve been on championship teams, I’ve been on teams that have been right at the brink of winning a championship, and they did those things. So I wanted to be a part of a group that did that.

“Winning and losing, I could take all that. I’ve been in the league for a long time. So it’s not more so about just a result. It’s how we get to that point. And I wasn’t feeling how we were getting to that point. I didn’t want it to affect the game so I waited to the offseason to tell people how I felt.”