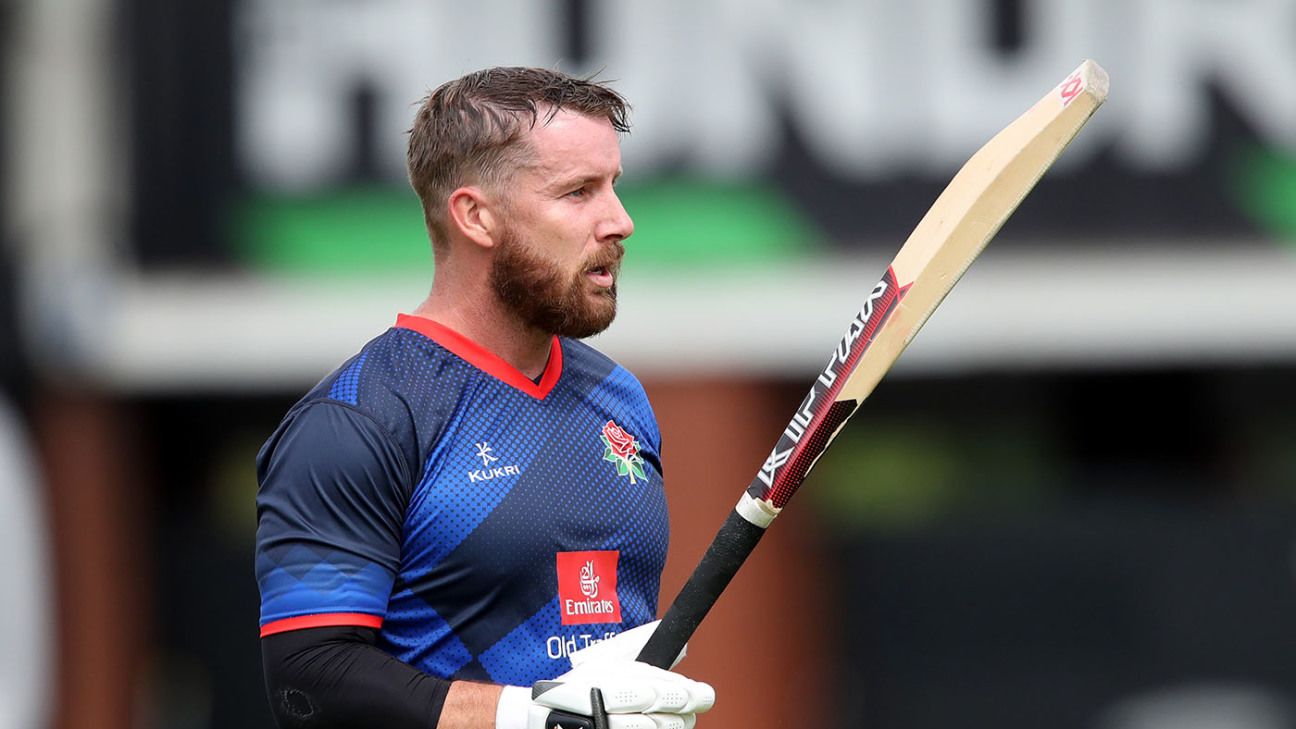 Steven Croft and Rob Jones put on a record-breaking, unbroken 154 to set up a 39-run victory for Lancashire over Derbyshire in the Royal London Cup match at Emirates Old Trafford.

Despite a resolute innings from Shan Masood, who was last out for 82, that proved too many for Derbyshire on a sluggish pitch and the visitors were dismissed for 182, Will Williams taking career-best List A figures of 4 for 20
Lancashire’s openers got off to a slow start, scoring only 31 runs off the first ten overs of their innings as Sam Conners and Ben Aitchison maintained a tight line and length. Conners also took the first wicket when he had the in-form Luke Wells caught behind by Brooke Guest for seven but Keaton Jennings and Josh Bohannon then put on 36 before Alex Thomson took three wickets in 13 balls.

With his third ball the offspinner had Bohannon leg before wicket for 15 when the Lancastrian played across the line and he followed that four overs later by removing Jennings and Washington Sundar.

Having made 33, Jennings effectively yorked himself when he came forward and played over the top of a full-length delivery from Thomson and Washington drove his first ball straight to mid-off where Billy Godleman took a two-handed catch above his head.

That left Lancashire on 67 for 4 in the 21st over but the Derbyshire bowlers enjoyed no further successes as Croft and Jones blunted Godleman’s attack before settling for modest acceleration on a pitch unsuited to fast scoring.

Croft passed his half-century in 73 balls with four fours and Jones reached the same mark off 71 deliveries after hitting a solitary four.

However, the pair scored 40 runs off the last six overs and in the process they broke Lancashire’s fifth-wicket record in List A cricket, the previous mark of 128 being held jointly by Mike Atkinson and Mike Watkinson vs Oxfordshire at Christ Church, Oxford in 1992 and
Jason Gallian and Neil Fairbrother vs Leicestershire at Grace Road in 1997.

The most successful Derbyshire bowler was Thomson, who took 3 for 25 from five overs, but Mark Watt conceded only 33 runs from his ten overs and Conners took one wicket for 41 from ten overs, two of which were bowled at the death.

The visitors’ pursuit of 222 began as badly as their hosts had done. In the fifth over, Luis Reece was caught at deep square leg for 17 by the substitute fielder George Bell off Williams and six balls later Liam Hurt brought one back off the seam to bowl Godleman for one.

Harry Came was perhaps unfortunate to be given out caught down the leg side for a single but when Brooke Guest chipped Washington to Croft at midwicket, Derbyshire were 53 for 4 after 16 overs.

Masood and Anuj Daj then began much the same work of repair as Croft and Jones had accomplished for Lancashire and at the halfway point of their innings the visitors were 89 for four, two runs better off than Lancashire at the same stage.

Although, Dal played on to Hurt for 15 in the 27th over, Mattie McKiernan helped Masood add 48 in 12 overs to keep Derbyshire in the hunt. McKiernan was leg before to Williams for 27 and Thomson caught and bowled by Wells for 2 to leave Derbyshire needing 76 off the last ten overs.

Jack Morley, who finished with 1 for 37, and Washington took further wickets and the game ended when Masood holed out on the deep midwicket boundary, Jones taking the low, diving catch off Williams when 22 balls remained in the game.