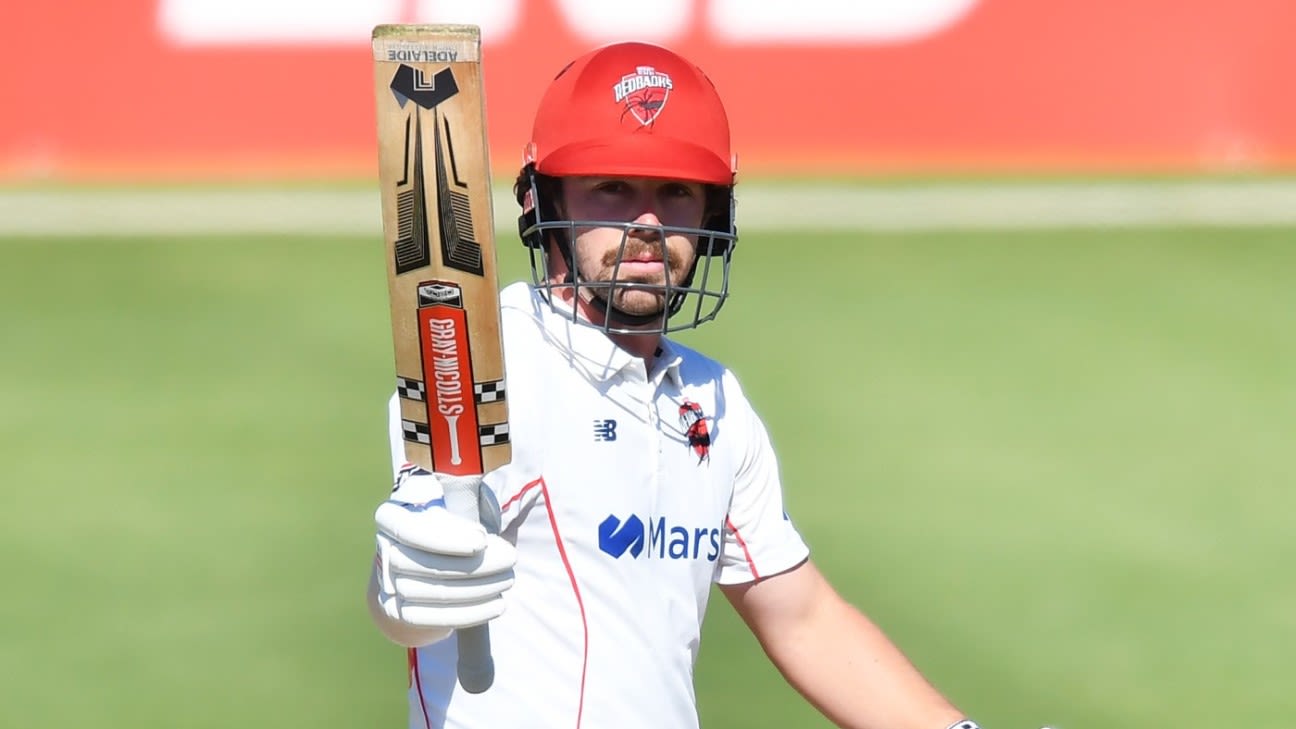 South Australia skipper Travis Head has made a major statement in his bid for the final batting spot in Australia’s Test team scoring 101 but Gurinder Sandhu‘s career-best six-wicket haul put Queensland on the brink of a dominant victory at Karen Rolton Oval.
South Australia were forced to follow-on early on day three after folding in their first-innings to be all out for 102 with Matthew Kuhnemann taking his third five-wicket haul in three matches. Queensland’s lead of 197 left captain Usman Khawaja with no choice but to ask South Australia to bat again. But in an unusual twist of fate, it handed Head the opportunity to make amends for his first innings failure and denied Khawaja himself the same chance with both men fighting for the final middle-order spot in Australia’s team for the first Ashes Test in Brisbane.
While national chairman of selectors George Bailey insisted last week that the selection panel was already leaning towards one of the two prior to this match and that they were not involved in a bat-off for a spot in the lead-up to the Test match, Head’s hundred would undoubtedly have made an impression.

On a surface that had been extremely difficult for batting, where only Marnus Labuschagne and Bryce Street had scored more than 42, Head withstood Queensland’s relentless pressure making a fluent 101 from 149 balls with 11 boundaries.

It was his second Sheffield Shield century of the season, adding to his staggering record at Karen Rolton Oval. In nine Shield innings at the ground, he has made three centuries and two half-centuries and averages 79.25. That doesn’t include his 230 in a Marsh Cup game there earlier this season. His first-class average at Australia’s Test venues is 36.35. But this century came on a pitch far less friendly for batting than some of his previous at the venue.

The rest of South Australia’s top order were suffocated by Sandhu whose height and accuracy proved incredibly difficult to handle. He took five of the first six wickets in the second innings to claim just his second five-wicket haul in first-class cricket and his first since his debut way back in 2013.

Harry Nielsen fought doggedly alongside Head making 42 while Nathan McAndrew made 37 not out to ensure Queensland would need to bat again. Kuhnemann picked up three more scalps to claim eight for the match before Sandhu returned to take the final wicket and complete his career-best figures to leave the Bulls needing just 88 runs to win.

Street and Joe Burns survived seven overs to stumps to leave the Bulls needing just 83 for victory on the final day.

Elgar: ‘We were thrown under the sword and the guys responded brilliantly’
Djokovic faces deportation as visa revoked again
Jess Jonassen not feeling ‘any extra expectation’ with Georgia Wareham and Sophie Molineux absent
Why Henry Cejudo went from Brandon Moreno’s mentor to training his opponent
How we got here: The Novak Djokovic visa saga timeline