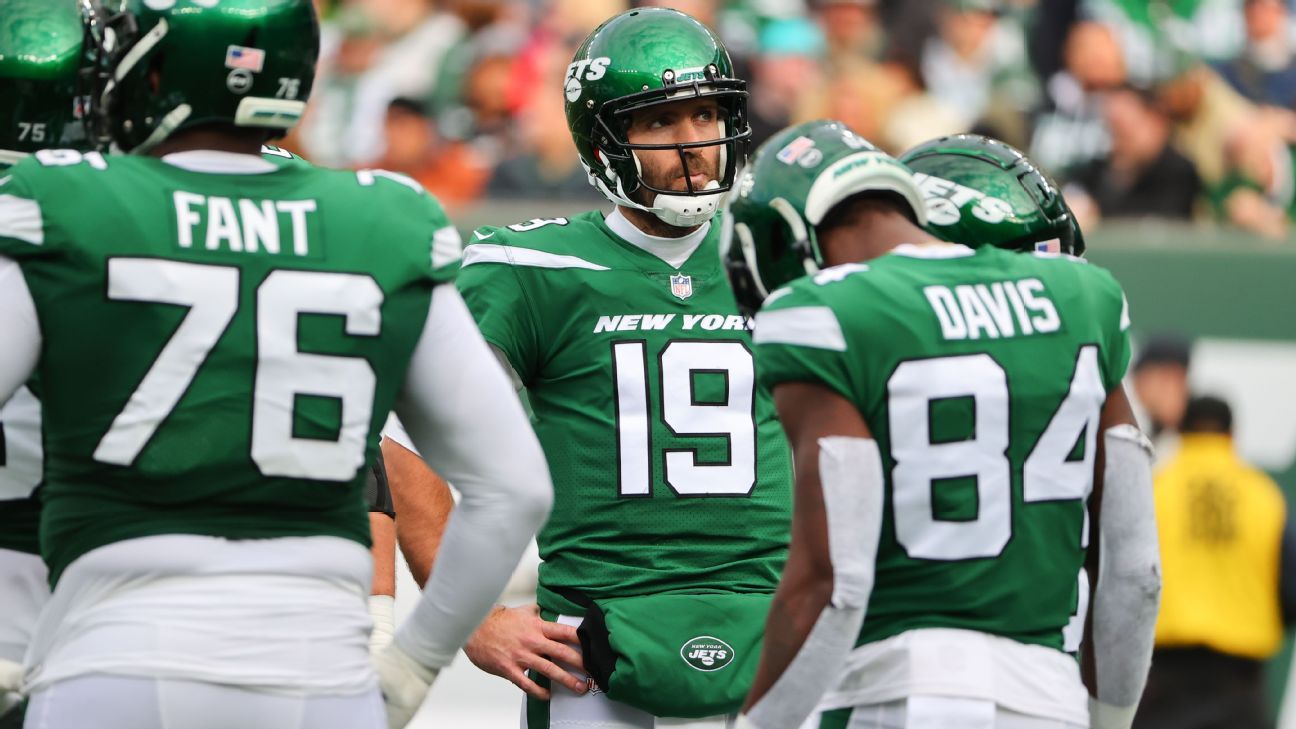 FLORHAM PARK, N.J. — The New York Jets‘ recent trade for backup quarterback Joe Flacco raised questions at the time of the deal, and those questions are bigger now that Flacco, who said last week he’s unvaccinated, is on the reserve/COVID-19 list.

Even though Flacco is expected to miss Sunday’s game against the Houston Texans — it will be the third time he’s inactive since the Oct. 25 trade — coach Robert Saleh defended the team’s decision to acquire an unvaccinated quarterback for a 2022 sixth-round pick.

“I’ll stand by this forever: When someone offers a sixth-round pick for a player of Joe’s caliber, to me there is no risk,” Saleh said Wednesday. “You’re playing with house money. I’ve said it before: You can trade back one spot and get that sixth-round pick back in a hurry.

“I know we look at draft capital, but that’s an easy decision. He’s a proven quarterback, a Super Bowl quarterback, a record holder, a guy who can settle an offense if he needs to step in there, which he did on Sunday. He did a phenomenal job against Miami’s pressure system. That, in itself, is worth its weight in gold.”

Flacco, 36, passed for 291 yards and two touchdowns in a 24-17 loss to the Miami Dolphins, but he was headed back to the bench this week because rookie Zach Wilson — out the past four games with a sprained knee — has been cleared to start against the Texans.

The Jets (2-8) will sign Josh Johnson off the practice squad to serve as the backup because Flacco and Mike White were placed on the COVID-19 list on Tuesday.

White tested positive and has been ruled out for the game. Flacco didn’t test positive; he was a close contact. Because he’s unvaccinated, Flacco must test negative for five straight days after his last contact before he can return to the team. That means he could be cleared on Saturday. If he had been vaccinated, he would’ve been allowed to stay with the team and practice.

Flacco also had to clear five days of protocols at the time of his trade from the Philadelphia Eagles, which occurred one day after Wilson’s injury. Because of the delay, he didn’t have enough time to get ready for the Oct. 31 game against the Cincinnati Bengals and, on a short week, the Nov. 4 game against the Indianapolis Colts.

The Jets made the trade for Flacco, a former Super Bowl MVP with the Baltimore Ravens, because they wanted veteran experience behind Wilson.

During Wilson’s absence, White started three games, beating the Bengals in impressive fashion but losing the next two. (He injured his forearm and played only one quarter against the Colts.) It was widely assumed that he’d start against Miami, but Saleh pulled a stunner and opted for Flacco.

Flacco would’ve been Wilson’s backup on Sunday, but that appears unlikely. Saleh suggested it would be in an emergency situation. He alluded to the Thanksgiving holiday, when the number of positive tests could rise. If Wilson or Johnson winds up on the COVID-19 list, they could fly Flacco to Houston on Saturday or Sunday.

“There’s a possibility he could be there Sunday,” Saleh said. “We’re rolling with Josh unless this holiday season something else happens, so we’re going to leave that door open.”

Wilson said he wasn’t concerned about contracting the virus from White.

“I feel like we’ve taken the precautions and stuff,” said Wilson, who is vaccinated. “Obviously, I hope it doesn’t happen — you never know — but I feel good. I wasn’t worried about it at all.”