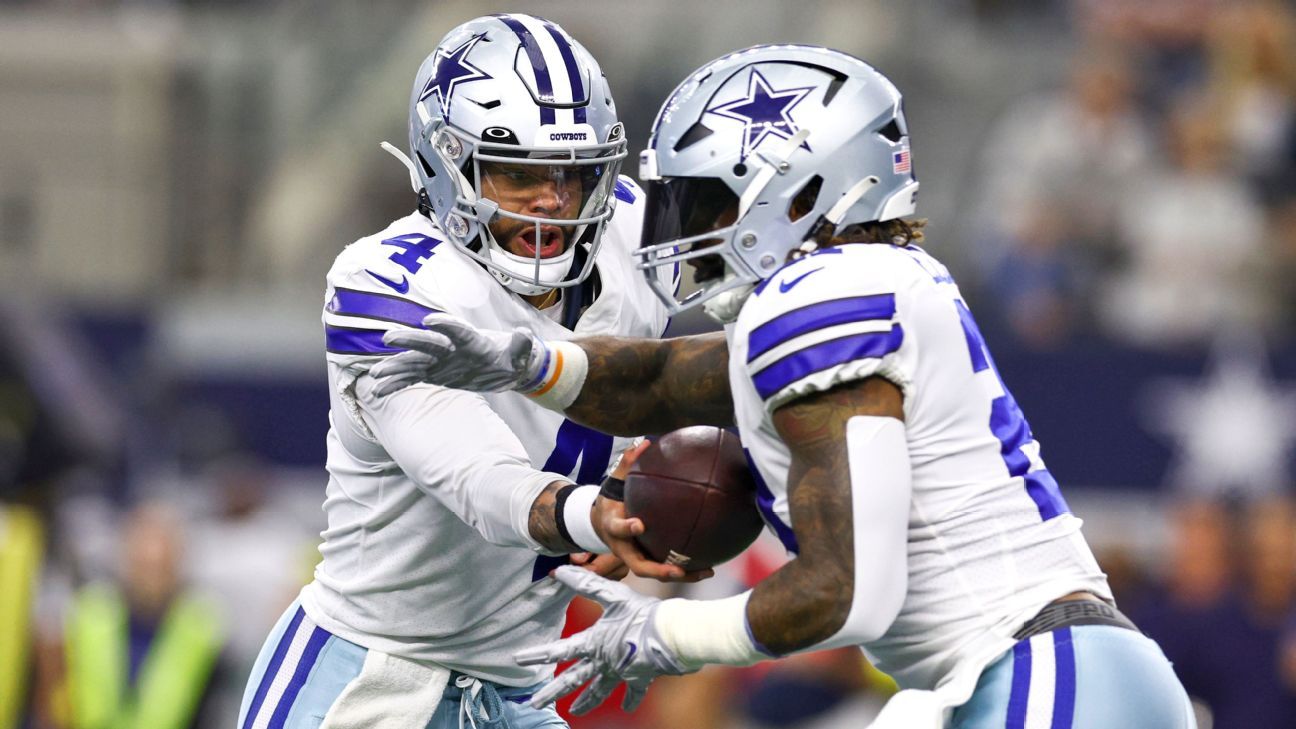 Joe Mixon‘s early Week 11 exit prevented him from hitting the over. Samaje Perine picked up the slack and was consequently 15% added in ESPN fantasy leagues heading into this weekend. While that situation was disappointing, it was nothing compared to the gut punch Dameon Pierce delivered. Pierce’s totes and yardage have steadily decreased over the past three weeks. Perhaps a change from Davis Mills to Kyle Allen will improve things, but the outlook isn’t nearly as sunny as it was a month ago. He’s currently the RB16 in ESPN’s consensus rankings.

But enough of the negative, this is a time to be thankful!

And I’m thrilled that three of my five props hit in Week 11. Let’s push for perfection this go-around.

Using ESPN’s metrics database and some assistance from stats ace Kyle Soppe, I’m here to help you win in fantasy and at the books.

It’s a trap. Between the matchup and the game script fantasy managers could be tempted to over project Singletary’s potential production. Don’t fall for it.

Buffalo ranks fourth in overall pass rate. Game script doesn’t change that. The Bills also rank first in pass rate when leading. On the rare occasion that the team does commit to the ground game, the running backs rush to the left over 35% of the time (9th highest). Interestingly, the Lions allow the sixth-fewest yards per carry to RBs when running left (3rd most on all other carries).

Even if this game does get out of hand and the Lions can’t cover the 9-point spread, there’s no guarantee that Singletary gets tapped for mop up duty. James Cook recorded 11 totes in an eight-point victory over Cleveland last Sunday. He was also more efficient than Singletary, posting the same number of rushing yards on 7 fewer carries. A performance like figures to keep the rookie in the mix.

The Lions, Bills, Cowboys, Giants, Patriots and Vikings play on Thanksgiving Day and we’ve got you covered heading into a 16-game week. Make sure to set your lineups before Lions/Bills kicks off at 12:30 p.m. ET

Thanksgiving Day Playbook
Mike Clay breaks down the game from all angles, with projections and advice for key players in Thursday’s three games.

The issue with Davis has always been volume. Since Buffalo’s Week 7 bye, however, Davis has averaged over 7 targets per contest. Last week he managed a season-high 32% target share. It turns out that feeding the 23-year-old is good for the offense. Davis has cleared the above line 13 times over his career. In those 13 outings, Buffalo has out-scored the opposition by an average of 10.7 points. And, whaddayaknow, the Bills are 9.5 favorites on Turkey Day.

The spread is indicative of Buffalo’s offense… as well as Detroit’s pass defense. The Lions have allowed the sixth-highest deep pass rate (55.1%) and the second-highest aDOT against (8.5 yards). In the aforementioned 13 contests in which Davis recorded at least 56 yards, he also posted an aDOT of 18 yards. By that math, he only needs to corral four balls to hit the over, which seems entirely doable given the matchup and the Bills pass-happy approach. He’s my WR20 for the week.

Jerry Jones doesn’t care about your fantasy team. It doesn’t matter that Tony Pollard is generating 2.8 more yards per touch than Elliot. Or that he nearly doubled Zeke’s rushing yards on the same number of carries last week. Elliot continues to notch double-digit totes, averaging 3.7 more carries per contest than Pollard.

Elliot has recorded at least 15 carries in six of his last seven games. That’s the same number of totes he’s handled coming off of the knee issue that had him sidelined for a pair of contests. Meanwhile, running backs facing the Giants have cleared 10 carries eleven separate times this season (and Elliot hasn’t gone under that number at any point over 2022). Therefore, volume should not be an issue. Efficiency, however, could be.

Yet those 11 aforementioned RBs, combined to average 5.5 yards per carry when facing the G-Men. Additionally, New York has allowed 957 rushing yards (11th-most) between the tackles. That’s a per game average of nearly 96 rushing yards up the middle. Zeke handles the lion’s share of inside runs, recording 50 more such rushes than Pollard since the beginning of last season.

Between game script (-10) and matchup (NYG is allowing 4.7 YPC), Eilliot can plod his way to 60 rushing yards and a score. He’s a low-end RB2/high-end flex for fantasy purposes.

Kirk Cousins has thrown eight interceptions thus far into 2022. Three of those came in Week 2 at Philly. That game was on primetime. So is this one. Cousins has been picked off in seven of his last eight primetime outings.

Quarterbacks tend to throw picks when they’re pressured. New England is third in the NFL in pressure rate (33.8%). Consequently, Cousins has been off-target on nearly 28% of pressured pass attempts over the past two seasons. The addition of a talent like Justin Jefferson could certainly boost a signal caller’s confidence. The Patriots, however, appear up for the challenge. New England has allowed the fewest fantasy points to opposing wideouts over the last four weeks and just 4 TDs to the position on the season.

Finally, Vegas is projecting a close game with the spread just 2.5 points in the Vikings favor. Coming off of a disastrous performance at Dallas, there’s a good chance Cousins feels squeezed and starts pressing. One blunder and the over hits.

FREE TO PLAY. $10,000 in prizes available! Who will you pick to win? Make Your Picks

Minnesota likes to play fast. In fact, the Vikings rank sixth in pass rate, fourth in pass rate when trailing, and third in pass rate when trailing by at least a field goal. (Remember, the spread is 2.5 in Minnesota’s favor.) That translates into a high number of pass attempts for Cousins (37.7 per game, QB4). Noting the lockdown nature of New England’s cornerbacks, however, Cousins is likely to hone in on Hockenson and boost his tight end’s already substantial number of opportunities. Hockenson is running a route on over 80% of drop backs (up from 74.8% when he was in Detroit). Additionally, since joining the Vikings, he has drawn at least nine looks in every game, making him the only tight end in the league to post 9+ targets over three consecutive outings. The former Lion has managed a 66.2% catch rate over the season. Another nine looks at that conversion rate and he closes out the week with six grabs.

Meyers is not a fantasy star, but he’s a reliable flex option. He’s recorded double-digit fantasy points in all but two games this year. His numbers have actually been up. And I’m not just talking about the TDs. Meyers’ YAC per catch has increased 25% in 2022. That’s key to this matchup, as Minnesota has given up the ninth-most yards after the catch so far this year.

New England’s slot man is averaging 4.9 catches per contest. Since the beginning of 2021, when he’s converted four passes he has subsequently cleared 60 yards. That yardage total goes up to 67.4 yards per game when corralling five or more balls. It’s close (that’s why this a bonus) but a 5-59-0 stat line feels within reach, particularly when noting that nearly 65% of New England’s yards comes via the air when entering the week as underdogs.