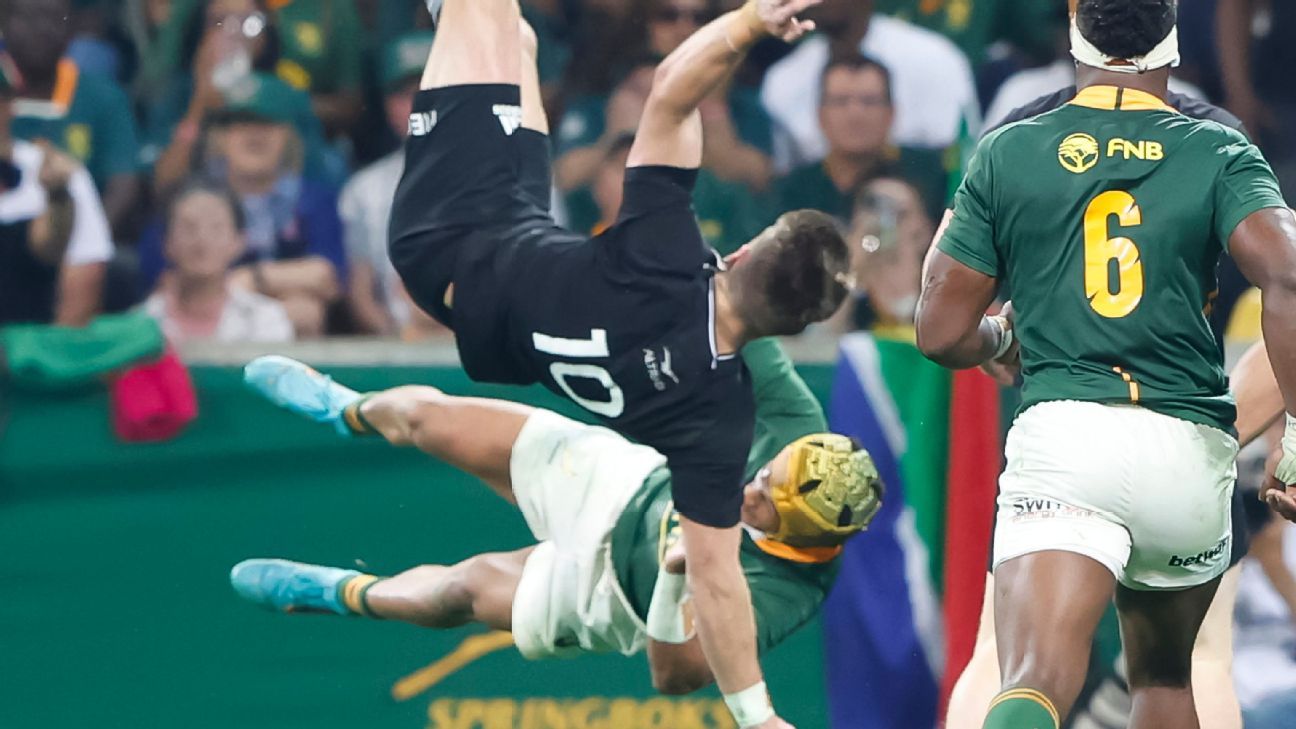 Round 1 of the Rugby Championship is in the books, with South Africa and Australia emerging victorious over New Zealand and Argentina respectively.

Those wins came in contrasting fortunes, however, with the Springboks in control of their Test against the All Blacks from start to finish whereas the Wallabies came from behind to run down the Pumas.

Read on as we break down some of the key talking points from the opening round of fixtures.

BARRETT COLLISION COULD HAVE BEEN AFFORDED

The All Blacks have rightfully been left fuming, after star playmaker Beauden Barrett narrowly avoided what could have been a catastrophic neck injury following an aerial collision with rookie Springboks winger Kurt-Lee Arendse.

Barrett crashed dangerously to the ground in the 75th minute of the match after Arendse had charged through to contest a high ball deep inside the All Blacks’ 22, only to get his timing wrong and make contact with the New Zealand No. 10 at high speed, flipping him over in mid-air in the process.

Arendse was also injured and taken from the field, while referee Angus Gardner presented a red card to the Springboks winger soon after as well.

Given the high force and danger of the incident, Arendse will likely have a few weeks to consider his technique on the sidelines.

But the incident could have also been avoided, or the likelihood of it happening significantly reduced, if Arendse had been sanctioned for an earlier aerial challenge on Jordie Barrett.

While the All Blacks fullback was uninjured in the incident, Arendse had again got his timing wrong and he was in no real position to make a fair contest of a box kick from replacement scrum-half Jaden Hendrikse.

Had Gardner, or any of the match officials for that matter, recognised the 10th minute incident was worthy of a penalty, Arendse may well have taken a moment to consider his technique and potentially have corrected it to avoid what was almost a terrible outcome for Beauden Barrett.

All Blacks coach Ian Foster, who is under mounting pressure after a fifth loss in six Tests, had every right to bemoan the lack of control of the aerial contest, which is a huge part of the Springboks game plan.

“[I’ve got] massive concerns,” Foster said of the Arendse incident. “It’s probably the worst I’ve seen. It was pretty disappointing because it happened in the 10th minute as well and they deemed it was fair.

“Part of the problem in the game is in the lineout if you throw a jumper over to their side with an arm up, it’s considered obstruction, whereas it’s becoming a free-for-all for jumpers just to be able to jump and stick a hand out and say they’re competing. It needs to be addressed.”

The All Blacks know they have to improve their work under the high ball, and they may well be without Jordie Barrett for Saturday’s second Test in Johannesburg. But the safety of the defending player in the air must be prioritized – so this was a failure of the officials as much as it was Arendse.

Is there a more immovable figure over the ball in rugby than Springboks hooker Malcolm Marx?

Certainly he gave the All Blacks all kinds of headaches at the tackle in Nelspruit, winning multiple turnovers and disrupting the visitors’ attack often in the fleeting moments when New Zealand appeared to be building some continuity.

Marx’s build makes him a tough proposition to shift from the breakdown once he has taken up a strong position over the ball, similar to the mould that made David Pocock such a dominant force at the tackle across his tremendous career.

The Springboks hooker also contributed the most run metres [28] of any of his teammates in the South Africa pack in what was a commanding performance, albeit one that had a few wobbles at the lineout.

Such is the depth and interchangeability of the world champions’ front-row, however, it won’t be a surprise to see Marx return to his role on the bench among the “Bomb Squad” for the second Test this weekend.

ROUTE ONE WORKS FOR THE WALLABIES

It’s no surprise that the Wallabies have built one of world rugby’s more dominant mauls since the arrival of Brumbies coach Dan McKellar, with the ACT side having long used the powerful set-piece to its advantage in Super Rugby.

On Saturday in Mendoza, the Pumas simply had no answer to the Australian drive, as each of Folau Fainga’a and Fraser McReight crossed as a result of the set-piece, while referee Mike Adamson awarded a further penalty try after two consecutive Pumas infringements – which also brought about a yellow card to flanker Marcos Kremer.

Argentina coach Michael Cheika later admitted his side had work to do if they were to repel the Wallabies’ maul in a week’s time.

“I thought we did really well for the first 50 or 60 minutes and then Australia did really well to come back and attack and pressure us. We went a bit individual at the time and were therefore caught out,” Cheika said.

“The biggest area was obviously three tries from the maul, so that’s something we really want to fix. It’s not acceptable.

“We see that as a front line of our team, and that was really disappointing as a team and it’s something we need to work on and transfer into the game.”

Jed Holloway is fast becoming the story of Australian rugby in 2022.

Having exited the Waratahs at the end of 2019, disenchanted with the way the franchise was heading, Holloway was then carrying the tag of a wasted talent – a player who had never reached his full potential.

But some time out of Sydney, first in Japan and then the United States, the impact of his partner and the birth of his daughter, Holloway returned to NSW with a point to prove this season and, under the tutelage of Darren Coleman, enjoyed a terrific Super Rugby Pacific campaign.

As of the weekend, Holloway is now a Wallaby, the emotion of his achievement hitting home in an interview with Australian broadcaster Stan Sport after fulltime in Mendoza.

“Yeah, it’s unreal, it’s something that … f—,” Holloway said as he struggled to find the words to describe his emotions.

“I knew this was going to happen, I told my Mrs it was bellying up and I knew it was going to come out at some stage. But it’s been a lot of sacrifice that has gone into this and although I wasn’t perfect [tonight] I enjoyed the moment and [was] very stoked.

“I got to enjoy the moment, but I also got to share it with a very good friend of mine, Matt Gibbon.”

Pushed on some of the sacrifices he had made and whether he thought a Wallabies call-up might never happen, Holloway was again overcome with emotion.

“Yeah there definitely was,” he said. “I sort of cut [short] my time in Japan and went over to spend time with my wife and meet my child for the first time in America. And it was a long shot because I still believed in myself, and she believed in me no matter what.

“She’s American, and for her to back me on that [return to Australia], I’m just very proud that I can stand here tonight and make her proud, and make my family proud and all the people who I represent and they know who they are.”