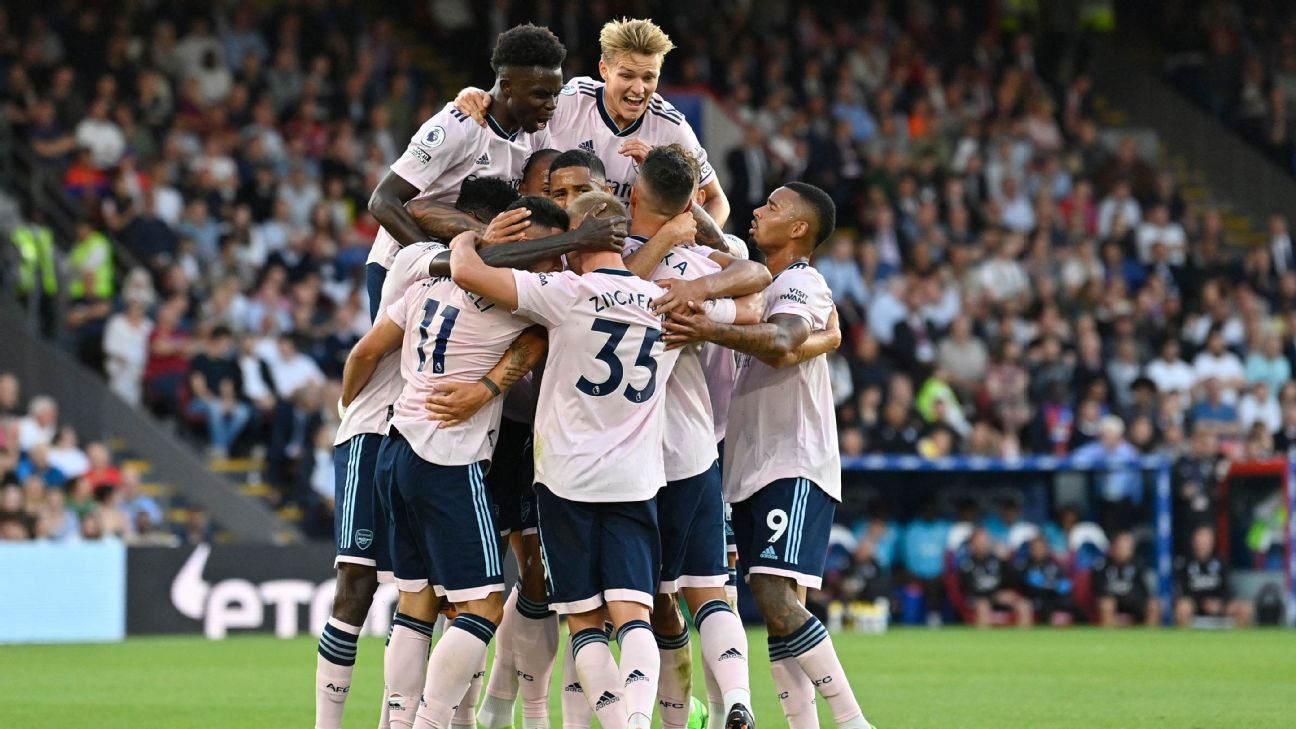 LONDON — Arsenal started their 2022-23 top flight campaign with a 2-0 win against Crystal Palace, showing early signs of promise for this season. The Gunners hit the ground running, with their three debutants delivering solid performances.

Here are the main points, top players, key stats and notable moments from the game.

Arsenal were on the back foot on the opening Friday night of last season as they lost 2-0 to Brentford but it was a different story under the lights across London this time. There has been plenty to excite Gunners supporters during a pre-season in which they made shrewd signings and won all five friendlies, but this was the first major test of their hopes of returning to the top four and they passed. They had to ride their luck at times with Aaron Ramsdale called into one excellent stop to deny Eberechi Eze early in the second half, but Marc Guehi’s late own goal gave them a deserved win which will only heighten the sense of optimism around the club.

Eze is a fine player and as he steps up his return from an ACL injury, the highly-rated 24-year-old will surely improve as he steps into the void vacated by Conor Gallagher, who returned to Chelsea after a season-long loan last term. But Crystal Palace missed Gallagher on Friday. Only Wilfried Zaha (15 goals, two assists) had more goal involvements than Gallagher (eight goals, five assists) and Palace missed both his energy to break up Arsenal’s periods of possession and his potency in the final third.

William Saliba, Gabriel Jesus and Oleksandr Zinchenko made their Arsenal debuts at Selhurst Park and all contributed in different ways to a hard-fought victory. Jesus was impressive as Arsenal dominated the opening 35 minutes while Zinchenko’s header was the key component of a clever corner routine which allowed Gabriel Martinelli to open the scoring. Saliba, perhaps the most long-awaited debutant of all given he originally signed for Arsenal three years ago, was a much more assured presence than his more experienced centre-back partner Gabriel. It is only the beginning, but all three demonstrated their potential.

The pressure on this kid is intense given Arsenal fans have been calling for his inclusion ever since he signed from Saint-Etienne in 2019 — and he didn’t disappoint. A composed display featuring several vital interceptions and helped Arsenal weather difficult periods.

Palace struggled for a cutting edge during long periods of the game and Edouard missed their only real chance of the first half when heading straight at Ramsdale. Understandably substituted for Jean-Philippe Mateta before the hour mark.

Martinelli scored the first goal of the 2022-23 Premier League season off an Arsenal corner and a Zinchenko assist.

The first goal of the #PL season belongs to @gabimartinelli!

“We are going to try. There are a few things that we planned and if we could do them it would be great.” – Mikel Arteta on the possibility of more transfers.

“It was very good because we start with a win and a clean sheet. It was a tough game, but we won at the end, so very good. I’ve waited a long time, but we (did it) in my first ever game, and I am so happy.” – Saliba

– Gabriel Martinelli scored his 12th career Premier League goal, his 2nd against Crystal Palace; he ties for the most goals against a single opponent in Premier League play (Sheffield United, West Ham, and Leeds United).

– Arsenal record their 33rd Premier League clean sheet under Mikel Arteta as manager; the 5th-most since his debut on Dec 26, 2019.

Crystal Palace: They face a tough next set of fixtures with a visit to Liverpool on Aug. 15, a home match against Aston Villa on Aug. 20 and a clash against champions Man City on Aug. 27.

Arsenal: They host Leicester City on Aug. 13 before playing newly promoted sides Bournemouth on Aug. 20 and then Fulham on Aug. 27.