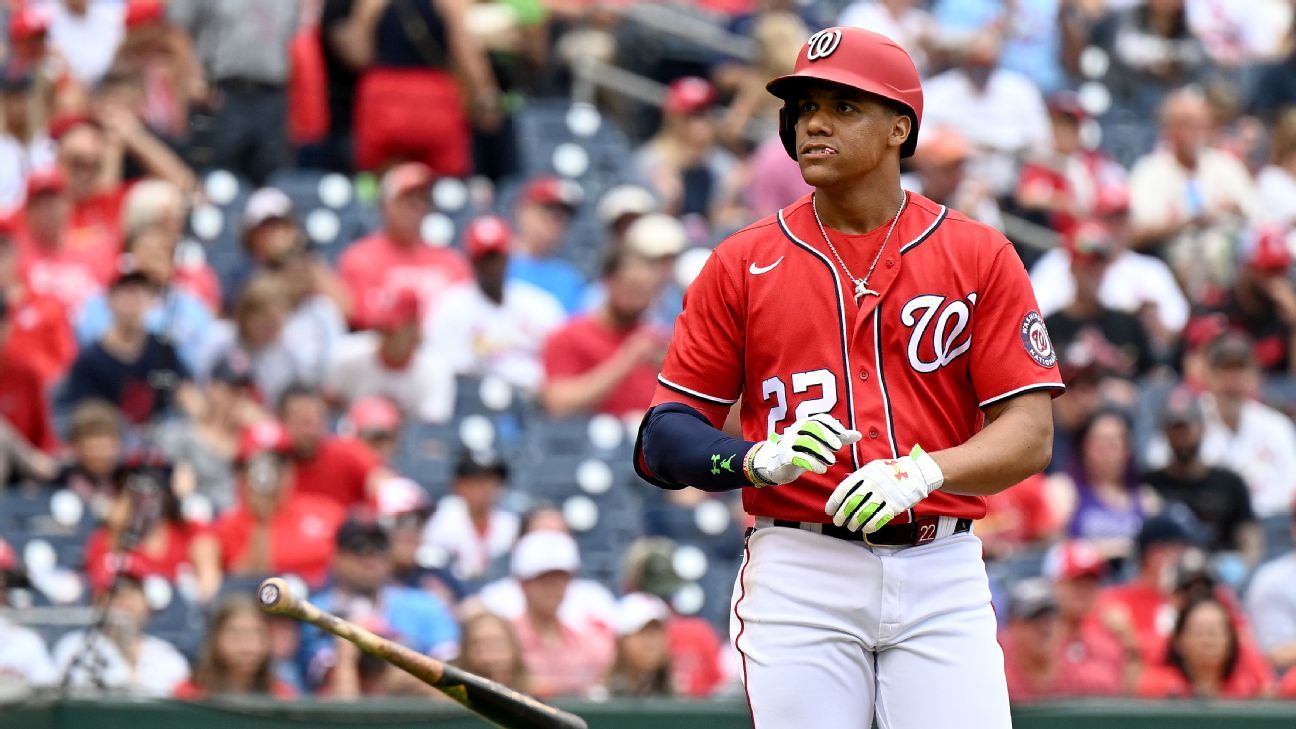 Generational-superstar outfielder Juan Soto is moving on from the Washington Nationals to the San Diego Padres after Tuesday’s stunning deadline trade, and this should be awesome news for the Padres and fantasy managers as well. Soto, 23, entered this season with a career .301 batting average and .981 OPS over his first 2,003 plate appearances and 464 games, drawing comparisons to some of the greatest players in history, including Hall of Famers Ted Williams, Mickey Mantle and Ken Griffey Jr. The fact that Soto is currently hitting .246 should scare nobody. Better things are surely to come.

Soto was one of the top selections in fantasy drafts, both points-based and roto, because he offers considerable power with arguably the best plate discipline in the sport. While veteran first baseman Josh Bell (who joins Soto in the move to the Padres) was thriving behind Soto in the lineup, few others were contributing for the beleaguered Nationals, who rank 27th in runs per game. Significantly, Bell is leading the major leagues in runners on base for him because he usually hit right after Soto, but Soto is only tied for 71st place in that category.

The Padres have a far better, deeper lineup, and Soto will not only knock in more runs, but also score more runs. Jurickson Profar and Jake Cronenworth get on base at the very top. Manny Machado knocks runners in, and another generational superstar in Fernando Tatis Jr. soon joins them all. The Padres may have the best lineup in baseball once Tatis returns from injury. Good for San Diego for emptying their prospect bounty for Soto and Bell. Bell is the No. 39 hitter on the ESPN Player Rater, one spot ahead of Soto, and each should improve after this move.

Padres outfielders Nomar Mazara and Wil Myers, pushed out of right field by the Soto trade, could have shared DH duties, but now it looks like those plate appearances may go to Brandon Drury, who was having a career season with the Reds. Drury, eligible at 2B, 3B and OF in ESPN leagues, already has a career-best 20 home runs and he is hitting .274, well above his career mark. He may not hit as high in the San Diego lineup as he was doing in Cincinnati, but he should get just as much playing time and see ample run producing opportunities.

Meanwhile in Washington, memories of the 2019 World Series championship run are long gone, with few players left. However, some enticing players are coming in. Shortstop C.J. Abrams entered 2022 as one of the top prospects in the sport, blessed with contact ability and a sprinter’s speed. While he struggled with inconsistent playing time for the Padres this season, he hit .314 with seven home runs and 10 steals at Triple-A El Paso. He may be Washington’s leadoff hitter soon and a major source of stolen bases. Luis Garcia can slide to second base, ending the Cesar Hernandez era.

Left-hander MacKenzie Gore is another significant asset with major league experience who is heading to the Nationals, and while he is currently on the IL with elbow inflammation and soreness and may not pitch again in 2022, let’s remember he had a 3.18 ERA this season before recent troubles, with more than a strikeout per inning pitched. Gore, 23, has the potential to be a top-20 fantasy starting pitcher, although most will be able to invest in him in the later rounds for 2023, based on both the injury concerns and the lowly Nationals surrounding him.

Dynasty league managers should continue to covet outfielders James Wood and Robert Hassell III, both among the top prospects in the sport. They’ll now head to Washington, and they remain on track for stardom. Neither seems likely to debut before 2024, though. Wood, 19, has a 1.054 OPS in Low-A ball, with 10 home runs and 15 stolen bases. Hassell, 20, has a .846 OPS in High-A ball, with 10 home runs and 20 stolen bases. Much can happen before these fellows get to the major leagues, and Soto is an amazing player, but give it time before ultimately judging how the Nationals fared in this megadeal. It’s possible that when all is said and done, both franchises win.