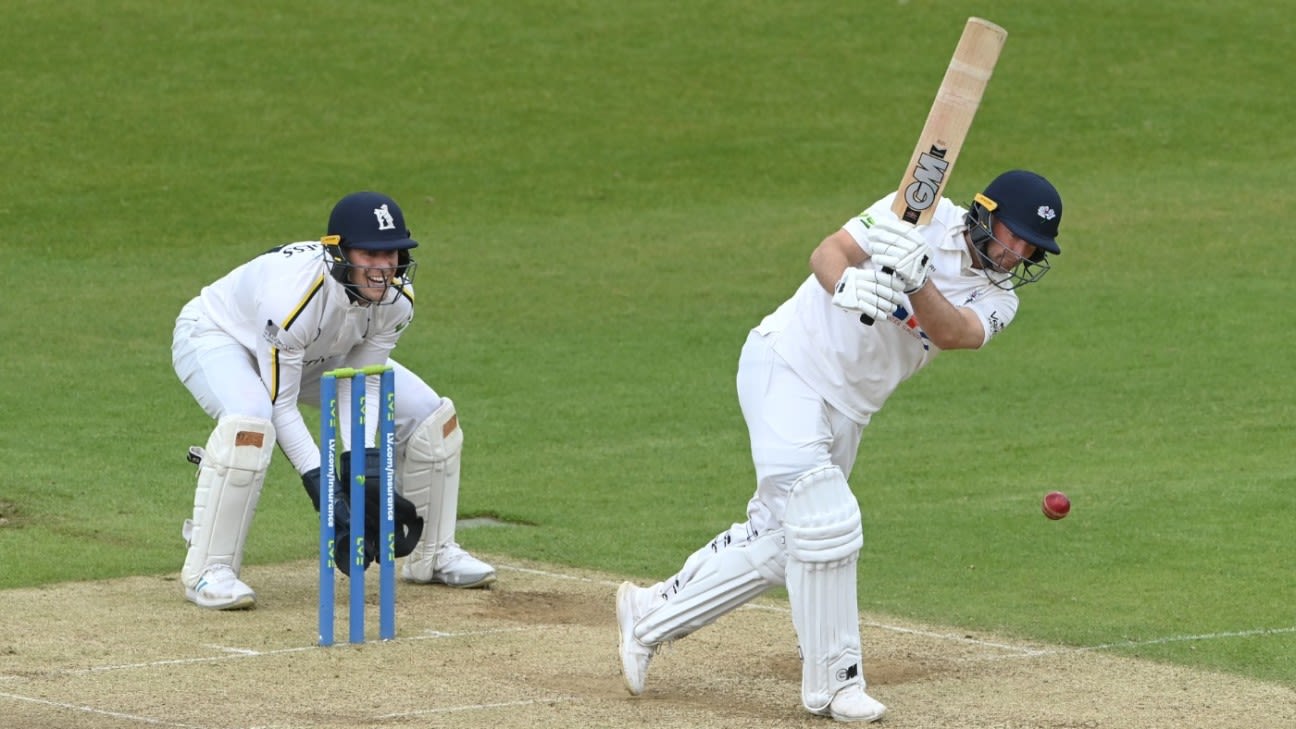 Anybody who witnessed last week’s Roses match, and reflected upon the favourites to win the Championship season, would feel that it was a strange old world if Yorkshire were to find themselves ahead of Lancashire when the first raft of fixtures ends on Sunday evening.

Yet that is a potential outcome after Lancashire, dominant in the Roses match and strongly fancied to take their first title since 2011, suffered a first-innings collapse against Essex at Old Trafford and Yorkshire moved into a position of strength against last year’s winners, Warwickshire.

Strong first-innings batting performances have been at the heart of Yorkshire’s season and they remained wedded to the task at Headingley, driven to 269 for 4, and a lead of 25 when rain caused a premature halt 17 overs early, by the England call-up Harry Brook and a batter whose England days have passed and who now must stave off retirement as long as he can, Adam Lyth. New and old in harness in a fourth-wicket stand of 159 in 43 overs that began cagily but gradually took the game away from Warwickshire with deceptive ease.
It is a rare occasion when the dismissal of Joe Root, who was out for 8 when he edged a late-swing delivery from Henry Brookes to the wicketkeeper, leads to such a positive outcome.

It was a poignant stand in many ways (this is new Yorkshire after all, where hearts are open and emotion encouraged), because Brook’s uncomplicated ambition dovetailed with Lyth’s more complex determination to keep his career on the rails. He has been a loyal and skilful pro, but he had 140 runs at 18 in a season of high scores and on the first day had brought groans from the crowd with two dropped slip catches, and had been stung enough to respond.

For nearly six hours, including an hour on the first evening, he set his season to rights. It was a player who knows him best, Will Rhodes, once of the same parish, who restrained him most, also the left-arm spin of Danny Briggs, but otherwise he milked the offside with relish whenever the opportunity presented itself.

Whereas Brook’s innings are an outpouring of talent, Lyth was a worthy old pro, buckling down. He just avoided falling at short leg, off Briggs, on 87, and after his century was achieved, he was nearly run out on two occasions by Alex Davies as fatigue took hold. The rain which fell at 5.30pm must have felt blissful as it fell upon his forehead. He dedicated his innings to his wife, Lily, who has suffered a year of illness but who is reportedly over the worst. Life still happens outside the confines of professional sport.

Brook has only failed to reach 50 once this season, and he had 82 to his name when he edged an excellent outswinger from Oliver Hannon-Dalby to first slip. He is a much less fretful figure than he was this time last year, which is a bit of a shame for those who self-indulgently like to see a bit of eccentricity in their cricketers, but a proof of his growing maturity. A Test debut will not be long delayed. As Lyth remarked: “Nobody is hitting the ball better than Harry”.

Brook is the leading scorer in Division One with 840 runs at a remarkable average of 140. With his departure, probably went another season – this one of six games and benign surfaces – where nobody has seriously challenged Graeme Hick’s 1000 runs by the end of May, last achieved in 1988. Ben Compton (like his cousin Nick before him) has also come within wondering distance, but the feat is now distant enough to be dubbed by Wisden as one of the “quaintest pursuits” in English cricket. Shift the Championship to later in the season, where it should reside, and it may never be mentioned again.

He has doubtless played more soundly this season; there were more play-and-misses here than he has been accustomed to as the ball continued to swing. He goes to Lord’s for the first Test in the knowledge that he will be the batter omitted, but he has a new management team to impress at close quarters and, anyway, he is only a calf strain away from a Test debut.

Yorkshire’s season of batting consistency is entirely out of character with recent seasons and all the more creditable considering the racism debate that sullied the club in the close season (and that, if you care to scratch the surface, still exists). Lord Kamlesh Patel is a temporary chairman and does not really have the time, or indeed the circumstances, to continue for much longer. Darren Gough, still based in the south, probably remains an equally short-term hit as director of cricket. The appointment of a full-time chief executive remains in abeyance. And occasional tensions rear their head – a life member was reportedly barred from the ground this week after a contretemps with racist overtones and emails are still circulating about the minutiae of AGM legality that are best left unread. People really do need to attend to their courgettes.

The ECB’s inquiry is also proving to be as slow as was Yorkshire’s and, as much as the county deserves to know if it will face a points penalty – players and coaches have a right to know if they are pressing for the title or avoiding relegation – decisions that should be made quickly for the good of the game are nearly always made slowly because somewhere, on behalf of someone, the lawyers are taking their shilling. Charges might be laid within a few weeks, although charging a new set-up committed to change for the perceived failures of the regime no longer in power would seem to possess dubious logic.

That Yorkshire are holding body and soul together during all this is a tribute to their coaching staff, led by Ottis Gibson, their captain Steve Patterson, whose maturity in the face of adversity has never been more needed, and a playing staff who have got on with the job. They have only won once this season. It is not the done thing for a Yorkshire Championship crowd to cheer, but if they win again, and move above Lancashire in the table (still quite an ask against the draw specialists of Division One) during such a testing season, then the optimism and resilience of youth deserves commendation from every corner.