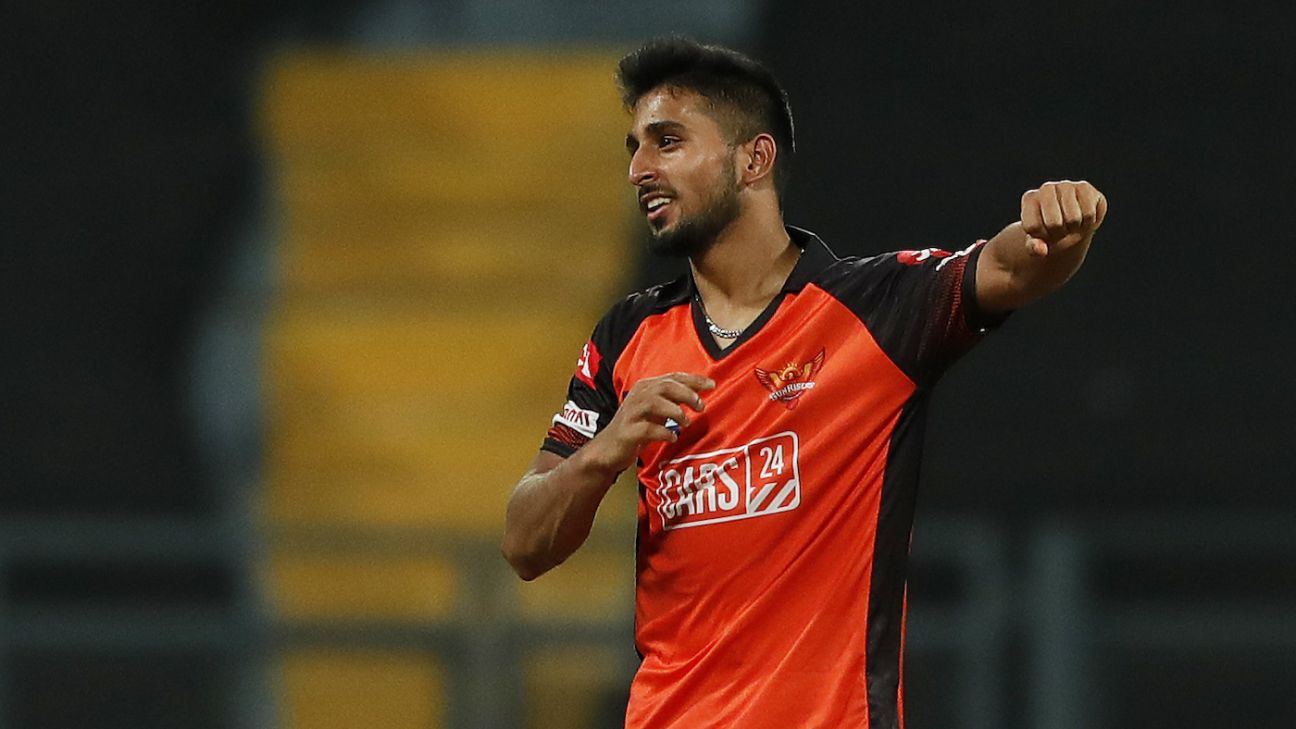 Cricket
Share on Facebook
Share on Twitter
Share on Google+
Share on Pinterest
Share on LinkedIn
Sunrisers Hyderabad’s fast bowling sensation Umran Malik needs to be given a central contract “straightaway” by the BCCI. That is the strong suggestion from former India coach Ravi Shastri, who also believes Malik will be a “handful” in first-class cricket and has the potential to be even part of the Indian Test set-up subject to him being put on the development pathway by Indian cricket authorities.
Malik, who recently clocked 157 kph, possibly the fastest ball in IPL history, is also the fourth-highest wicket taker this IPL with 21 wickets in 13 matches at an average of 20 and economy rate of 8.93. Playing his first full IPL season, Malik already has bagged a five-for (the second-best figures so far this season), but it is his raw, uninhibited pace that has troubled batters, brought fans to the edge of the seats and excited pundits like Shastri who now believe the Jammu tearaway has a bright future awaiting him.
“Central contract straightway,” Shastri said on ESPNcricinfo’s T20 Time Out after Malik put another impactful performance with a three-wicket haul in the win against Mumbai Indians at Wankhede stadium on Tuesday. “And keep him in the mix, don’t let him float around. Keep him in the mix with the main players and then he learns seeing (and) being around with the Shamis and the Bumrahs, and see the way they train, see the way they manage their workload. Of course, there’ ll be the team. Management there, support staff that’ll help him do that, but don’t let him stray at the moment. Get him into the mix, and keep him there and groom him.”

While he has rattled the best batters – on Tuesday Malik knocked down Mumbai captain Rohit Sharma’s helmet – with his extreme pace as well as uprooted stumps, senior fast bowlers like Shami have asked Malik to focus on combining “pace with accuracy”. Shastri agrees with that and pointed out the only thing Malik should be asked to work on post IPL is conditioning himself well, taking enough rest and ensuring he is consistent with his lines.

“He’ll get better and better,” Shastri said. “You see his bowling once he takes a wicket. Look at the lines he starts bowling as opposed to when he has not got wicket – that’s when he is trying everything, his lines are all over the place. You don’t want him to cut down on pace. The last thing you would tell him looking for control, cut down on pace. What you want him to do is get his lines right: if he can bowl that stump line, attack the stumps on a constant basis, varying his lengths, he will trouble him. If he gets a wicket and new guy comes in, he can really rattle him because he has got the pace, he can keep the bloke on his toes, but it’s that line – if he gets into that channel, without cutting his pace it will make a huge difference.”

And if Malik sticks to such a plan, Shastri said he would not be surprised if the 22-year-old will soon be part of the Indian Test squad. “I promise you this guy is going to be a handful in red-ball cricket. Handful, really. If he is part of an Indian pace battery that (already) has Bumrah, Shami, you add this bloke in (as) a fourth guy it’s going to be a serious (bowling) attack.”

Shastri’s views are nearly similar to that of Sunrisers’ head coach Tom Moody, who had said Malik is like a “Ferrari” and there was no point asking him to cut down his pace and focus on line and length.
At 22, Malik is enjoying the best time of his life, doing something that comes naturally to him: bowling fast. But you can sense he is also hearing what the experts are saying. After the win on Tuesday, Malik was keen to understand how his senior Sunrisers teammate Bhuvneshwar Kumar had bowled a maiden in the penultimate over of Mumbai’s chase.

Bhuvneshwar pointed out that he had worked out delivering yorkers was the “best option” based on the behaviour of the pitch and he managed to pull it off. Malik then wanted to know what was the key to bowl successfully in death overs, the most difficult phase in T20 cricket. “The most necessary things in death bowling is to keep yourself calm because what happens often is the pressure comes as soon as a boundary is hit,” Bhuvneshwar told Malik in the chat on iplt20.com. “So the only thing I will say is how much you can keep calm and have a calm mind then it will help you.”