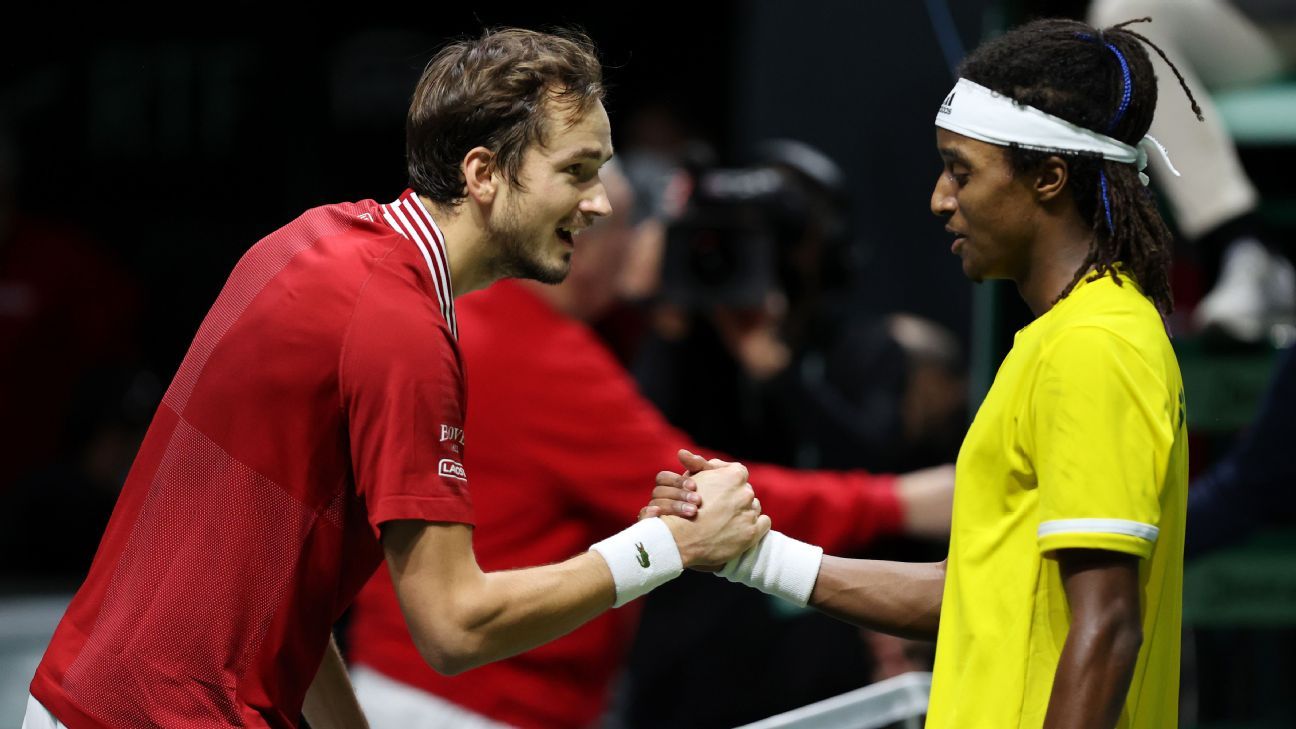 MADRID — Daniil Medvedev maintained his perfect record at the Davis Cup Finals to put Russia into the last four.

Medvedev defeated Mikael Ymer 6-4, 6-4 Thursday to give Russia an insurmountable 2-0 lead over Sweden in the quarterfinals of the revamped team event.

Russia will face Germany in the semifinals on Saturday. Serbia and top-ranked Novak Djokovic will face Croatia in the other semifinal on Friday.

It was the third consecutive straight-set victory for the second-ranked Medvedev after group-stage wins over Spain’s Pablo Carreno Busta and Ecuador’s Emilio Gomez.

Medvedev broke serve twice in the first set and three times in the second against No. 94 Mikael Ymer, Sweden’s top-ranked player.

“Today I should’ve served better, but I’m really happy to bring the point to the team,” Medvedev said. “The most important thing is that we are winning a lot of matches. We didn’t lose a tie in the group and we are really looking forward to Saturday.”

Russia beat Serbia in the quarterfinals of the event’s first edition in 2019 before losing to Canada in the last four. Russia is seeking its third Davis Cup title after triumphs in 2002 and 2006.

The Russian team is officially being called RTF (Russian Tennis Federation) in the competition amid its ongoing doping suspension in international sport.

The fifth-ranked Rublev had a much harder time than Medvedev in his singles match against the 171st-ranked Elias Ymer.

After breaking serve twice to win the first set, he served for the match at 5-4 in the second but couldn’t close it out as Ymer won three straight games.

“Serving for the match, I relax a bit when I shouldn’t do this,” Rublev said. “I missed some easy forehands that normally if you’re focused and you’re doing everything right, you’re not going to miss them. I bring him back to the game. Then he starts to believe in himself, he starts to play much, much better.”

The Swede saved seven break points in total in the decisive set to keep it tight, but Rublev ultimately prevailed in the tiebreaker for his second straight victory after opening with a loss against Spain’s Feliciano López. Elias Ymer had won both of his group-stage matches.

Sweden last made it to the last four in 2007, when it lost to the United States. This was its first quarterfinal appearance since 2011. It is trying to win its eighth Davis Cup title, and first since 1998.

Russia won a group that included Spain and Ecuador, while Sweden was the best second-place team after playing in a group won by Kazakhstan and that included Canada, the runner-up in 2019.

Shamil Tarpischev, the longest-serving captain in Davis Cup history, is participating in his 100th tie with Russia.

Madrid was the sole host of the team event in 2019, but this time Innsbruck in Austria and Turin in Italy also held matches. The competition did not take place last year because of the coronavirus pandemic.