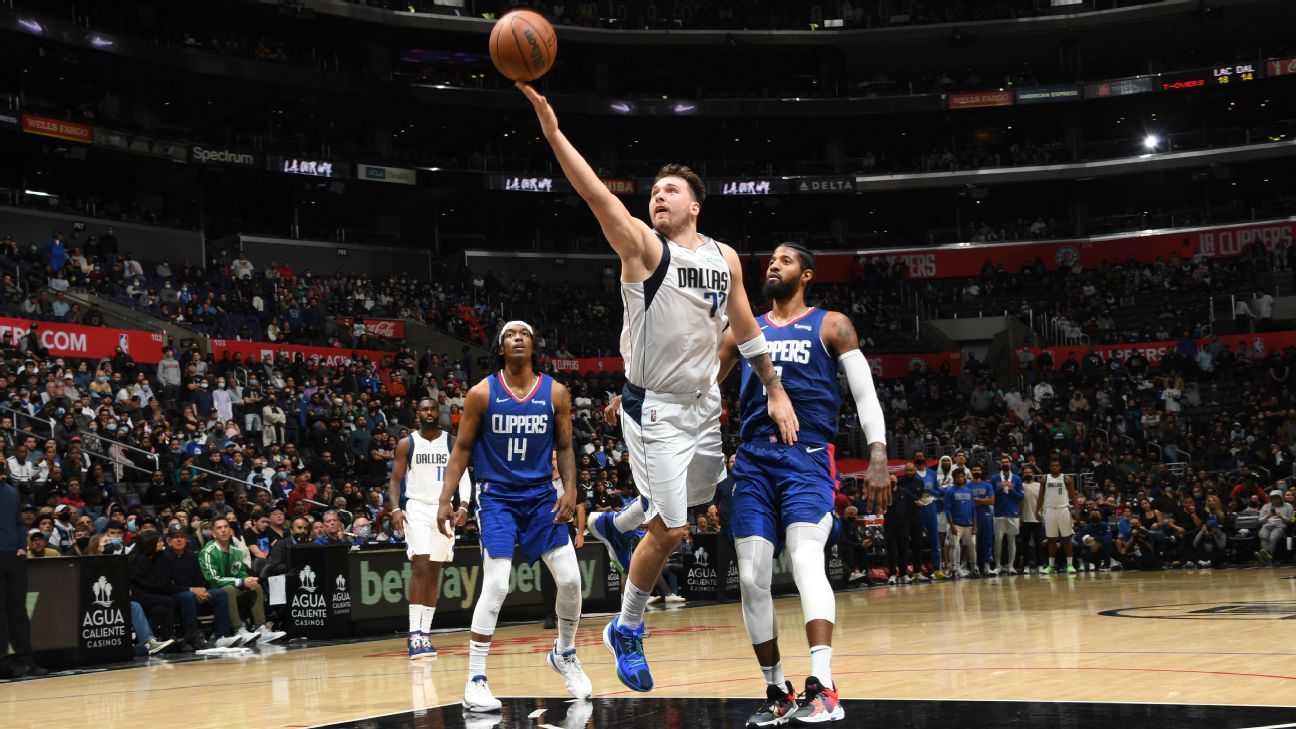 LOS ANGELES — As Luka Doncic walked past Dallas Mavericks coach Jason Kidd in the Staples Center hallway late Tuesday night, the All-Star smiled through the fatigue of his 41 minutes logged in his first game back from knee and ankle injuries.

But the Mavericks star could not have felt any better because he was back in his element, hitting tough 3-point bombs, nearly putting up a triple-double and having some fun at the LA Clippers‘ expense. Returning from a three-game absence, Doncic had 26 points, nine rebounds and nine assists as the Mavericks held off a furious comeback from the Clippers to take a 112-104 overtime win.

“I was tired,” Doncic said with a chuckle. “And overtime in the first game back, it was tough. But we got a win. That’s all that matters. I was happy.”

Doncic did not play in the Mavericks’ loss to the Clippers on Sunday and was a game-time decision Tuesday. But he said he was ready to go after his game-day afternoon nap.

It did not take long for his swagger to come to life, as Doncic received a technical foul late in the first quarter for talking trash to Terance Mann after scoring on the Clippers forward.

Doncic shot 9-for-21 from the field and 4-for-11 from 3-point range while seeing a steady diet of Clippers double-teams much of his night.

“I mean mentally, I was really happy to be back,” Doncic said. “I miss basketball. I know it’s only been three [games], but I will do everything possible to play the game. I felt great after I woke up from my nap. I was just ready to go.”

While the Mavericks got Doncic back, they lost another point guard, as Jalen Brunson was limited to 11 minutes after injuring his foot. A source said Brunson’s injury was not expected to be serious.

Like many of their playoff games during their consecutive first-round meetings the past two postseasons, the Clippers and Mavericks played a game that had emotion and a stirring comeback.

“When you beat somebody enough, you leave a bad taste in their mouth,” Clippers forward Marcus Morris Sr. said when asked why the Mavericks and Clippers have such competitive games. “Now they want to play against you a lot.”

Morris, who returned after missing 15 games with a knee issue, said that while the games are hard-fought, the officials make sure to keep the peace after some playoff run-ins with Doncic.

“The refs are on my ass, so I can’t even talk to Luka,” Morris said. “I can’t even like breathe on him. So that kind of like, makes it a little bit now where it’s corny. But it’s still competition.”

Dallas, which won the first two games in Los Angeles before blowing a 3-2 lead in a seven-game loss to the Clippers last postseason, led 102-92 with 1:30 left in regulation Tuesday night. But the Clippers scored 11 of the final 12 points of the fourth quarter, and Paul George buried a buzzer-beating 3-pointer from the corner to send the game to overtime.

“For a second, you were like, ‘Damn, we should have finished it right here,'” Dallas forward Kristaps Porzingis said. “But I think we are growing as a team mentally and kind of knew that, OK, if it is five more minutes, it’s five more minutes, and we will go out there and prove that we’re the superior team.”

Porzingis certainly has played better this season than he did against the Clippers last postseason. Porzingis, who averaged 13.1 points and 5.4 rebounds per game in that first round, finished with 30 points and seven rebounds Tuesday night. He scored six of Dallas’ nine points in overtime.

“Honestly, it is just easy, easy opportunities because of Luka,” Porzingis said. “Luka is out there, he just makes the game so much easier for everybody else.”