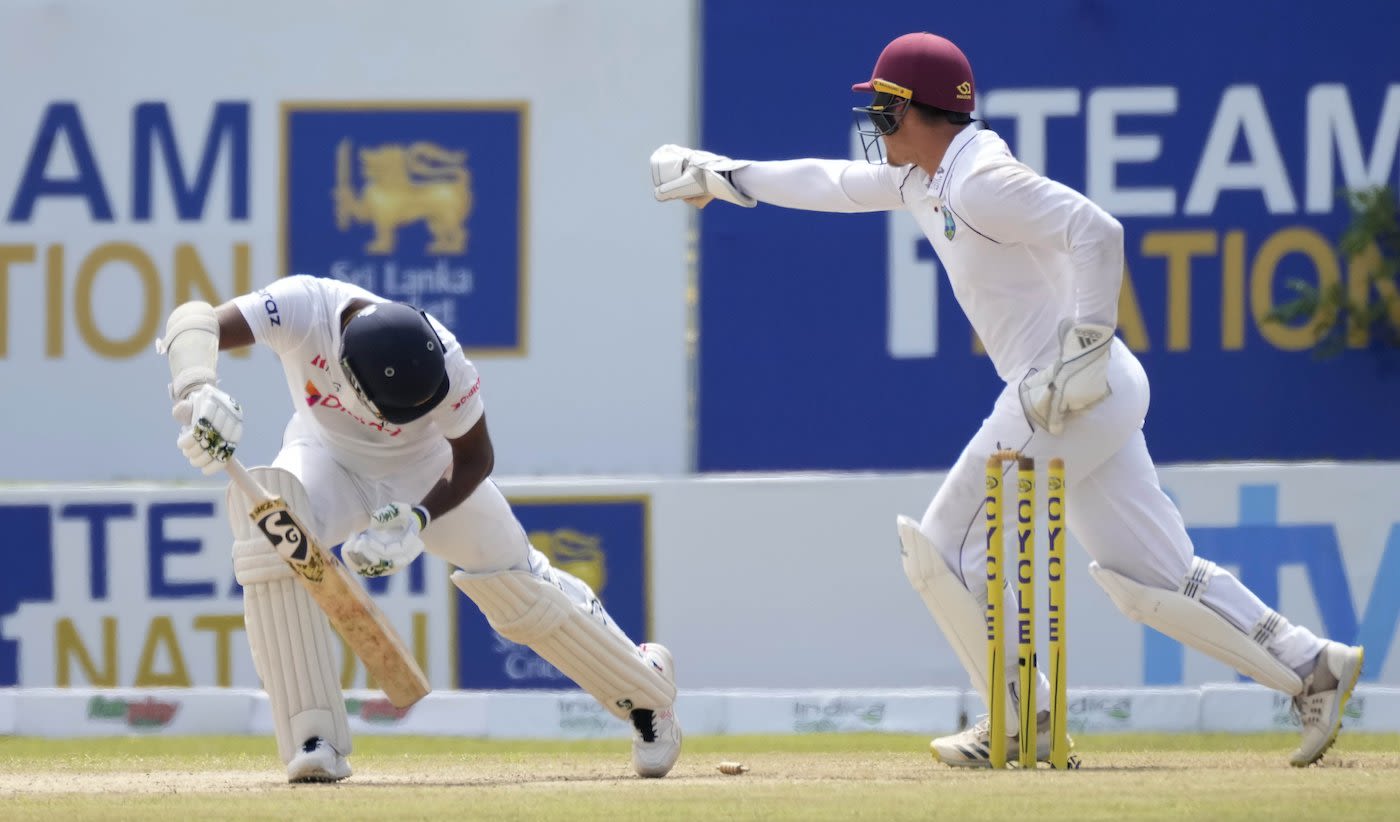 Gabriel, Chase and Warrican pick up wickets in the morning session on the second day

West Indies pulled themselves back into the match on the second morning, dismissing the overnight Sri Lankan pair inside the first hour, before making a late strike to make it three wickets before lunch.

Dimuth Karunaratne and Dhananjaya de Silva had begun the day on 267 for 3, with a shot at perhaps doubling that score on day two. But as they had fielded a short batting line-up for this game, West Indies can now dream of keeping the hosts to a manageable first-innings total. Suranga Lakmal, the first of the tailenders, faced 13 balls before lunch. The visitors conceded only 74 runs in the session.
Sri Lanka began the day watchfully, with overnight centurion Karunaratne facing out a maiden from Jason Holder to start, before offspinner Rahkeem Cornwall produced a tight early spell also. Dhananjaya, who began the morning on 56, seemed the more assured of the pair, but was the first to be dismissed, in freak fashion. In Shannon Gabriel‘s first over of the day, de Silva stood tall to defend, but was slightly late on the shot, and the ball bounced near his feet and looked to be headed on to the stumps. de Silva looked back and swiped twice, trying to swat the ball away from danger. The second of these swipes caught the top of leg stump, however, and he was out hit-wicket, having added just five to his overnight score.
Karunaratne, meanwhile, seemed to be working himself back slowly into the day, but was undone by an outstanding piece of wicketkeeping from Joshua Da Silva. The batter was lured forward by a floated Roston Chase delivery, which he tried to prod to the offside. He missed, and Da Silva whipped off the bails while Karunaratne’s back foot lingered on the popping crease. He was out for 147, having added 14 to his overnight score.
Dinesh Chandimal struggled against Gabriel’s short-of-a-length induckers early on, but got himself moving against the spinners, and was soon sweeping, cutting, and driving with a little more confidence. He built a 35-run stand with the more reticent Ramesh Mendis, who was eventually caught behind when Jomel Warrican got a ball to bite outside the off stump, taking the batter’s edge. He was out for 13 off 49.

Chase, who had taken two wickets early in the evening session on day one, has the best figures for West Indies so far – his 3 for 60 coming from 23 overs.