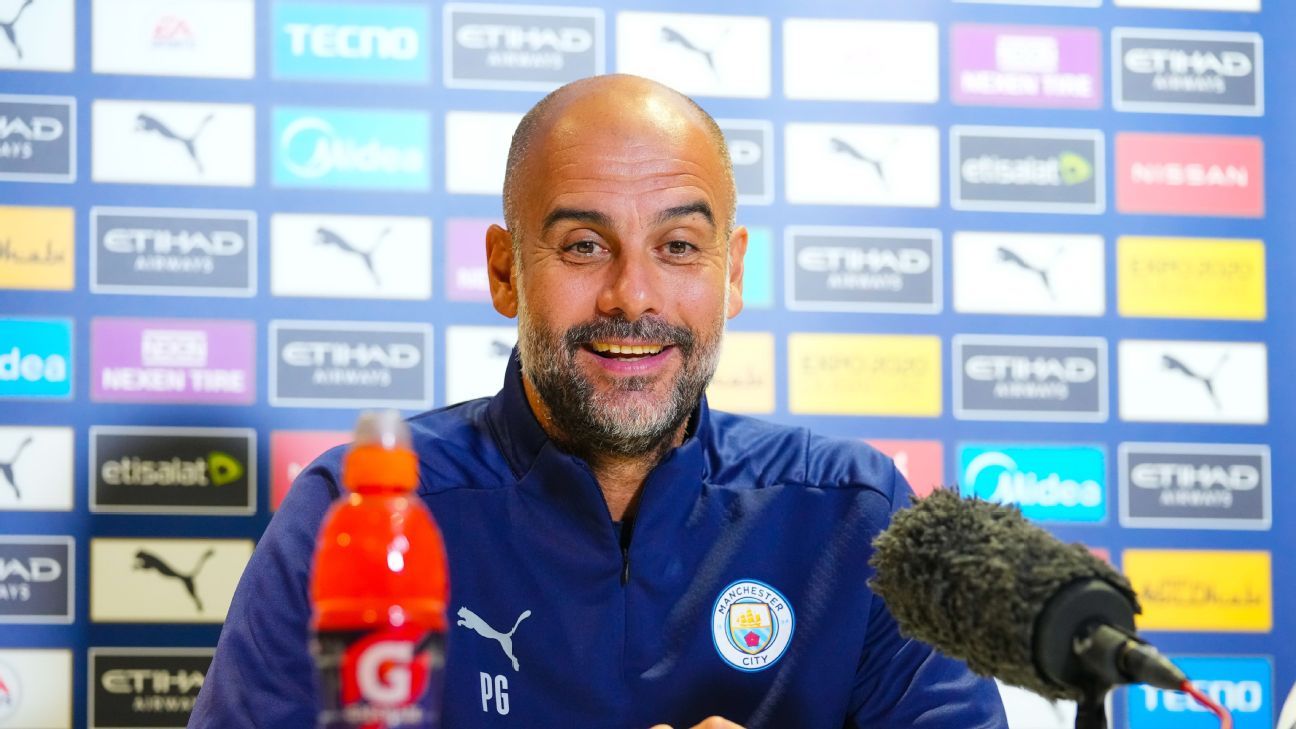 The early portions of the European soccer season is rife with interruptions: three international breaks in the first three months, in fact. But with the latest round of World Cup qualifiers in the books, we actually get a sustained look at the club ranks as the next time players join their national teams, it will be late January. The Champions League knockout rounds will be set, and the Premier League season will be 60% over.

Therefore, it’s fair to say that a lot of any given league’s race will be defined over the next two months.

Last year at this time, Manchester City made its move. After just three wins in their first eight matches, City unleashed a 19-match unbeaten streak beginning on Nov. 28, going from 14th place to 14 points up in first by the time they lost again in early March.

This year, Pep Guardiola’s squad is only three points back, and they’ve already played the teams ranked first, fourth, fifth, sixth and seventh. Aside from a Nov. 28 visit from West Ham, everyone else they will play from now until 2022 is eighth place or worse. They’ve suffered a couple of frustrating glitches — a 2-0 loss to Crystal Palace, a 0-0 draw with Southampton — but aren’t suffering with nearly as many issues as they were this time last season.

Despite Chelsea’s lovely early run and first-place status — and despite the fact that they’re Chelsea, defending Champions League winners — City’s odds of winning the Premier League have actually gone up since the start of the season. FiveThirtyEight gave them a 40% chance of winning in early August, but now City’s odds are up to 49%. Caesars Sportsbook lists their title odds at -125, equivalent to a 56% chance. Liverpool and Chelsea have seen their odds increase, too — the change in odds has as much to do with Manchester United’s lack of quality as anything else — but the front-runner remains obvious, and it’s the club that’s won three of the last four titles.

As much as it feels things haven’t changed in this regard, it’s still worth looking into what has changed for City of late. They remain the surest thing in English football at the moment, but they’ve undergone a couple of subtle shifts through the years, and they still have some personnel questions to answer moving forward.

First, let’s talk about the attack.

Between injuries and a general, Guardiola-esque desire to tweak and create a uniquely perfect lineup for each match, there has been quite a bit of shuffling of personnel so far, especially up front. Among attackers, only Gabriel Jesus and star summer signing Jack Grealish have played more than 60% of available minutes in league play, while Phil Foden (56%), Raheem Sterling (38%), Ferran Torres (31%) and Riyad Mahrez (26%) have all gotten runs. Torres is currently out with a foot injury.

Everyone in this sextet has produced when given the opportunity — 11 goals and 68 chances created (10 assists) between them — and midfielder Bernardo Silva scored as a de facto center-forward against Manchester United. But while City remains one of the most productive teams in the league, they aren’t the most productive. They are fourth in goals scored, behind not only Liverpool (2.8 goals per match) and Chelsea (2.5), but also West Ham United (2.1).

Liverpool is getting torrid production from Mo Salah at the moment, and Chelsea spent big to add forward Romelu Lukaku this past summer. All three of these clubs are producing higher goal totals than xG numbers (which is part luck but very much part skill as well), while City has not matched its xG totals to date.

City only made one of the two huge acquisitions it intended to make this offseason. They brought Grealish over from Aston Villa, and while the perceptions seem to be that he has been slow to grow into his new role, he’s produced at a mostly Grealish-like level: 3.2 chances created per 90 (he averaged 3.4 with Villa last season) and 0.24 expected assists, or xA, per 90 (0.27 last year). He’s scored only once on 16 shots, but has helped to fill the creative void that existed while midfielder Kevin De Bruyne was working through a series of injuries, and he’s forming a ferocious partnership with increasingly brilliant fullback Joao Cancelo on the left side of the attack.

In the meantime, the acquisition they didn’t make — that of Harry Kane, who remained at Tottenham Hotspur despite what was rumored to be a huge transfer bid (and Kane’s own professed desire to leave) — looms large. With City already light on centre-forwards (compared to its depth elsewhere, at least) and Sergio Aguero aging out of the club’s plans, they opted not to settle for a backup plan up front when the Kane pursuit fell through. They will likely resume their Kane efforts in the January transfer window, but if they remain unsuccessful, it will be interesting to see if they indeed look elsewhere or hold out until summer.

If De Bruyne, Foden & Co. find their top form with Grealish doing what he does, it’s clear this attack could find another gear or two with just the players already in the squad. But if scoring still lacks a hair by January and Kane remains in North London, will they look for reinforcements?

Finishing aside, one of the most interesting shifts has come in the pressure department

As in, City’s generating less of it.

Since averaging 8.3 PPDA — a go-to stat for general pressure and defensive intensity levels — in 2017-18, their first title run under Guardiola, City has allowed this number to slip a bit with each progressive season, even while still winning at a mostly high level.

>The bones of the Guardiola system remain in place — they’ve ranked first in passes per possession, possession rate, carries and both touches and possessions ending in the attacking third for each of the seasons in question — but City has sacrificed a little bit of defensive intensity.

There could be a couple of different reasons for this. First, it could simply be a strategic shift intended to bring about better defensive structure. The Premier League is loaded with good managers and talent good enough to execute said managers’ plans. They have adjusted to counter some of City’s tendencies, and already proved they could slice the Sky Blues up in counter-attacks in 2019-20, so Guardiola has come up with this as a counter to the counter.

It could also be a counter to the fact that the City midfield is, on average, pretty damn old. Fernandinho, still probably the best tactical fouler on the roster, is 36 years old and has played just 185 minutes in six league matches. Ilkay Gundogan, a steady, smart passer and last year’s surprise goals contributor (he scored 13 league goals in 2020-21 after scoring a combined 15 in the four previous seasons), is 31 and missed a month this fall with a hamstring issue.

Kevin De Bruyne, one of the most reliable creators in the world — 135 chances and 20 assists (plus 13 goals) in 2019-20 — is 30, and let’s just say his Transfermarkt injury history page might need a second page soon. (He’s also facing at least three games on the sidelines following a positive coronavirus test after international duty.) He didn’t top 25 league matches in either 2018-19 or 2020-21, and in the past 12 months alone, he’s battled hamstring issues, ankle issues and, well, a facial issue: he fractured his eye socket and nose in a nasty collision with Chelsea’s Antonio Rudiger in May’s Champions League final.

This is City, of course, and they have other options.

Silva is 27 and is playing some of the best ball of his career, having already contributed three league goals (tied for the most on the team), 13 chances (fifth) and 47 ball recoveries (third). And a couple of years after the club spent big to bring him from Atletico Madrid, defensive midfielder Rodri, 25, is absolutely thriving and finally totally ready to take the mantle from Fernandinho.

Foden, 21, remains an option here as well when necessary, but De Bruyne and Gundogan have been immense and important pieces of both Guardiola’s ball-control system and City’s recent success, and both players are at an age where the club has to be slowly planning for life without them. (The same theoretically goes for 31-year-old right-back Kyle Walker, but he almost never misses time and might even be part-machine.)

Either way, whether this decrease in pressure came in the name of structure or age, one thing is pretty certain: It has worked. City is allowing opponents very few quality scoring chances.

Guardiola teams have been soccer’s version of the old (American) football maxim “the best defense is a good offense” for a while now. City hogs the ball like none other, and if you don’t have it, you can’t score with it. But in 2019-20, they got caught out of shape a bit too easily.

With both Aymeric Laporte and John Stones battling injury and inconsistent form, City frequently fielded 32-year-old Nicolas Otamendi and 35-year-old converted defensive midfielder Fernandinho at centre-back, and their transition defense cratered. After allowing just 35 shots worth 0.2 xG or more in 2018-19, they allowed 56 in 2019-20. These high-quality looks accounted for 11 of the 20 goals they allowed in nine losses as they fell far behind Liverpool in the league title race.

In 2020-21, the combination of healthier personnel, the addition of star defender Ruben Dias and more caution from a pressure standpoint, mostly solved City’s woes. They allowed just 37 of these high-value shots, back to 2018-19 levels. This season, despite neither Stones, Laporte nor Nathan Ake playing overwhelmingly well next to Dias (and goalkeeper Ederson’s save percentage down a tick), they’re on pace to allow just 34 such shots. Rodri is thriving, Cancelo seems to be in at least two places at once, and opponents’ scoring is down to 2018-19 levels as well.

Opponents are averaging more passes per possession and more carries, and they’re finishing more possessions in the attacking third than early in the Guardiola era. But City has traded a little bit of control in the name of preventing high-quality chances, and it’s working out beautifully.

There are a lot of points available in the coming weeks

Between now and the end of the calendar year, City will host Everton, West Ham, Wolves, Leeds United and Leicester City while visiting Aston Villa, Watford, Newcastle and Brentford. They finish up Champions League play with a huge Nov. 24 visit from PSG, and a visit to RB Leipzig on Dec. 7. Their surprising Carabao Cup elimination to West Ham means their coming slate is a bit lighter than normal and could keep at least a few minutes off of the legs of some of its stars.

In short, this is a prime opportunity for City to make a move, and recent history suggests they’ll do so. Still, though both FiveThirtyEight and the sports books might favor Guardiola’s squad, they still view the league race as a “City vs. the field” coin toss. Liverpool is healthier and back to playing the dangerous/exhausting ball that won them the 2019 Champions League and 2020 Premier League titles. Chelsea are in first place despite openly seeming like they’ve only found about third or fourth gear to date, while City still has injury and age issues to worry about.

They didn’t manage to address their biggest need in the summer transfer window and aren’t guaranteed to in January, either. Their midfield is getting steady reminders of its average age, Walker might show his own age at any moment, and Dias could use a steadier dance partner at the back.

The numbers above are a reminder that City’s DNA rarely seems to change under Guardiola, but further subtle shifts (particularly in the finishing department) and a sustained visit from the injury bug will still determine how many trophies Manchester City manages to lift this season.