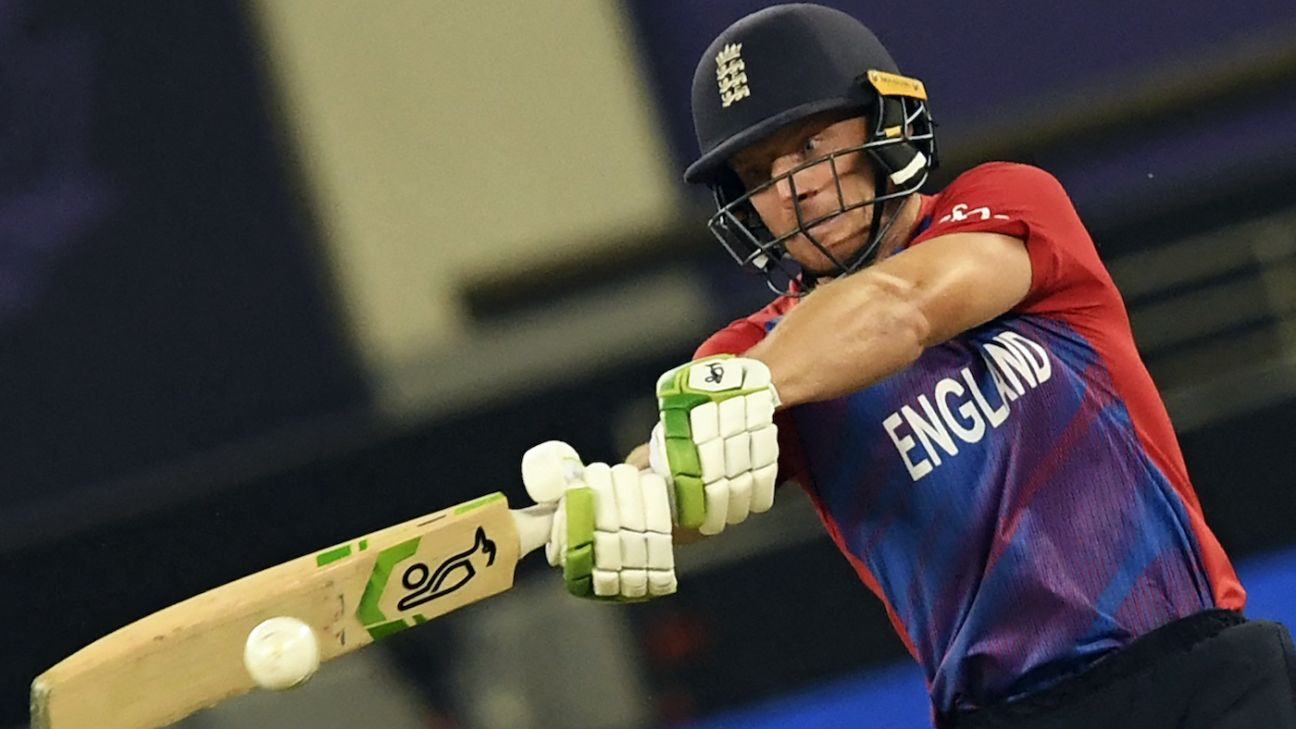 “When he comes off like today, it’s very difficult to stop him,” says captain Morgan after Buttler’s 32-ball 71 against Australia

Buttler had made nine runs off his first ten balls, watching Jason Roy take the attack to Australia’s new-ball bowlers, when he skipped down the pitch and launched Ashton Agar over long-off over his head. That shot made everything click: from then on he was in the zone, leaving his team-mates in the dugout to marvel at his effortless power and wonder if they had ever seen him play so well.

If you are in the USA, watch the Australia vs England highlights on ESPN+ here in English, and here in Hindi

“There was actually a game that we were talking about while he was going bananas out there – back in 2016, where he scored a 46-ball hundred against Pakistan in a 50-over – where very similarly, he just seemed to hit the middle of the bat over and over again,” Eoin Morgan, his captain, said afterwards. “He’s obviously one of the best players in the world and when he comes off like today, it’s very difficult to stop him.”

Three of Buttler’s sixes stuck in the mind: his one-two off Mitchell Starc, sitting deep in his crease and sending consecutive 89mph/144kph length balls into the stands with a snap of the wrists, the first measured at 94 metres and the second 95, which was quickly followed by a straight hit while skipping down the pitch to Adam Zampa, launching him 102 metres into the second tier.

“Every single six that he hit was 15-20 rows back – some 50 rows back,” Liam Livingstone told Sky. “I’ve said it all along: he’s the best hitter of a white ball in the world, and when he gets on a roll like that, there’s no stopping him. That was pretty much the perfect innings, a clinic of white-ball power hitting. It was a pleasure to just sit there and watch a genius at work.”

But perhaps Buttler’s most skilful shot was not one that brought him a boundary. In the penultimate over of the powerplay, Josh Hazlewood landed an inch-perfect yorker, honing in on the base of off stump, but Buttler gave himself some room outside leg stump and used his supple wrists to steer the ball into a gap in the covers. Hazlewood could hardly have bowled a better ball, yet conceded three runs.

It was a reminder of why Buttler is so valuable as an opening batter, on a night where it seemed far-fetched to think that there had ever been a debate about his best role. His average opening the batting for England in this format is 54.88, with a strike rate of 149.01 to boost; for all the value that he might add to their middle order, it is rare for a player to combine consistency and quick-scoring to the extent that Buttler has.

“It’s very minimum movement,” Mahela Jayawardene, who first promoted Buttler to open for Mumbai Indians in 2017, told ESPNcricinfo. “He just hits straight. When you have the option of the scoop, the bowlers are always under pressure with which field to go to.

“At the same time, he’s probably one of the best players through the off side as well: he opens himself up and the hands come through. He’s a good player of spin: he has the reverse-sweep, he comes down and hits – we saw the way he controlled Zampa [and how] he never let him settle into that line and length.”

It was an innings that will be remembered as one of the best by an Englishman in T20 World Cups, with perhaps only Alex Hales’ 116 not out against Sri Lanka in 2014 and Joe Root’s 83 off 44 in the Mumbai heist of 2016 rivalling it. Buttler’s final strike rate, 221.87, was his highest in an innings of 30 balls or more across his entire T20 career – for club or country.

“I think he’s certainly one of our players – and there are a few of them – that are at the forefront of changing the game,” Morgan added. “He’s one of the best players in the world but yet he’s still trying to improve his game and get better against every single bowler that he faces.

“It’s not just targeting bowlers that might suit him, it’s every bowler. When you’ve got guys that are at the forefront of change within the game – and positive change, taking the game forward type stuff – it says a lot about the guy.”

This was the night that Buttler arrived at the T20 World Cup and announced his intentions for the rest of the tournament. A similar knock in a semi-final or final might just confirm his status as England’s greatest white-ball batter.