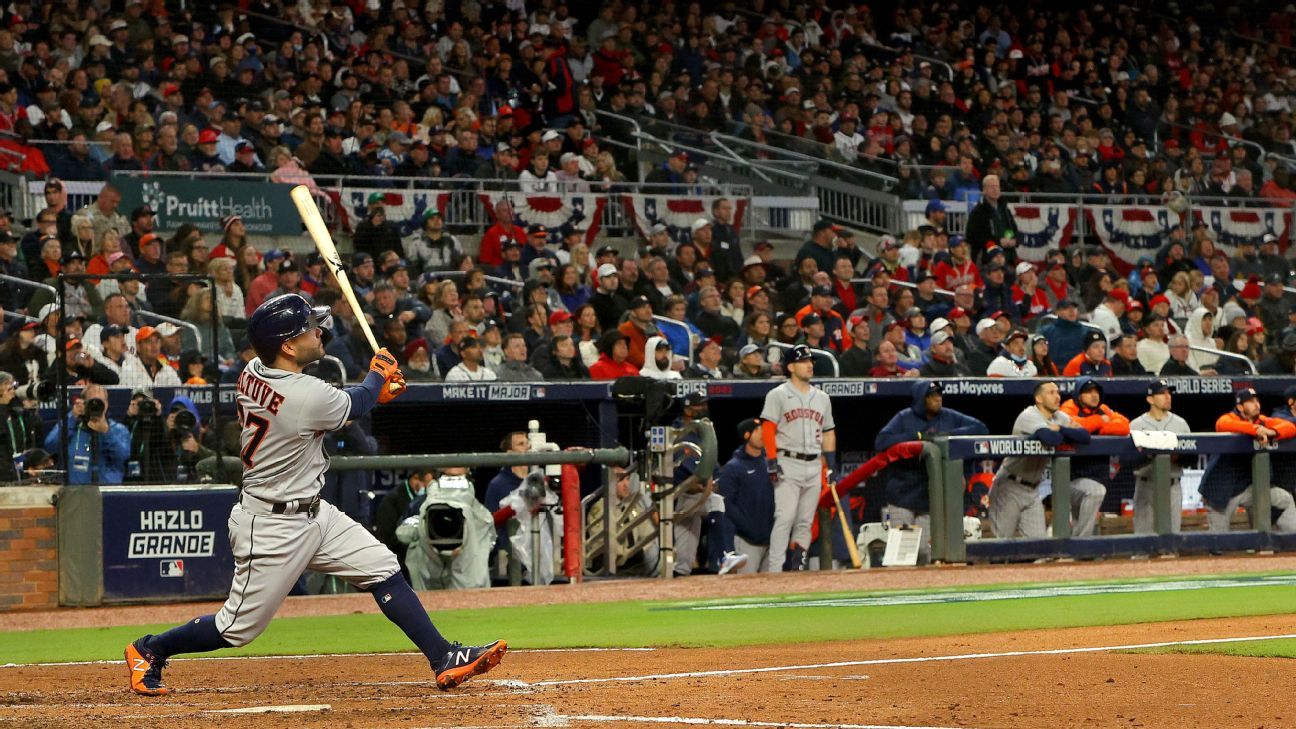 In Game 3 of the 2021 World Series, Atlanta Braves starter Ian Anderson stole the show with five no-hit innings against the Houston Astros. The Braves won the game and took a 2-1 series lead.

The Braves’ decision to go to the bullpen while Anderson was throwing a no-hitter was hotly debated, but Atlanta manager Brian Snitker said it was a personal feeling, not the analytics, that suggested Anderson shouldn’t face the top of the Houston lineup a third time.

“I was just like, ‘Ian, I’m going with my gut right here. Just my eyes, my gut,'” Snitker said about his decision to pull Anderson during the no-hit bid.

What’s the gut saying about Game 4? The numbers say a few things. The Braves are 6-0 at home this postseason. According to ESPN Stats & Information, only three teams have won seven straight home games in a single postseason. Those three teams — the 2008 Philadelphia Phillies, 2015 Kansas City Royals and 2017 Astros — all won the championship. If the Braves make it to a record 8-0 at home, they’ll win the series.

This postseason, however, Houston has been at its best coming off a loss. According to ESPN Stats & Information, the Astros are 3-1, averaging 7.3 runs per game following losses in the 2021 playoffs.

On the other side is Zack Greinke, who leads active pitchers in innings pitched. Greinke started once in the ALCS and lasted just four outs, inducing no swings-and-misses in the 37 pitches he threw. Frankly, he hasn’t pitched well since mid-August and while he’s a starter in pedigree, like Lee he probably won’t be expected to last long.

Indeed, let’s see how far each manager wants to go here. Expect lots of bullpen innings from both sides.

Guts? Numbers? More wine? Which will reign supreme? Here are the best moments from Game 4:

Altuve is at it again

After leaving seven runners on through the first three innings, the Astros finally make it 2-0 on Jose Altuve s 23rd career postseason home run (moving past Bernie Williams for second on the all-time postseason list behind Manny Ramirez’s 29). It was a long 434-foot blast to center field and, believe it or not, his first home run to center all season. Of his previous 35 home runs including the postseason, 34 had gone to left field or left-center and one to right field.

Oh, and let’s see what the organist plays next time Altuve steps up to the plate: This time it was “It’s a Small World.” Last night it was “I’m a Little Teapot.” Not so funny when the little guy crushes one over the fence.

Fascinating sequence in the top of the third as the Braves escape another bases-loaded jam, this time with no damage. With runners at first and third and two outs, the Braves intentionally walk Yuli Gurriel, the AL batting champ, to have Kyle Wright face the No. 8 hitter — pitcher Zack Greinke, who was batting ahead of catcher Martin Maldonado. Greinke singled in his first at-bat and is one of the best hitting pitchers in the game, but he also batted just twice all regular season. It’s a high-leverage run-scoring chance, but if you pull Greinke you need seven innings from your bullpen. On the other hand, Greinke hasn’t pitched well since mid-August. Dusty Baker let him hit and Greinke grounded out. We’ll see if that turns out to be the right move.

We’ll see if that turns out to be the right move.

A rough start for the rookie

Well, that could have been a lot worse for the Braves. Rookie southpaw Dylan Lee faced four batters and gave up an infield single and walked the two left-handed batters he faced, but Kyle Wright came on with the bases loaded and one out and induced an RBI groundout from Carlos Correa then struck out Kyle Tucker on a 96-mph fastball up in the zone. Tucker would probably like another hack at a 1-2 fastball down the middle that he fouled off. It was a big gamble for the Braves starting a pitcher with just 4.2 innings in the majors, even if they were hoping to just get one inning out of him. In the end, Snitker is fortunate that it’s 1-0 instead of 3-0 considering both these pitchers weren’t even on the original playoff roster for the Braves in the NLDS.

The pearl necklace worn by Braves outfielder Joc Pederson has become the accessory du jour for the postseason. The necklace got noticed in early October when Pederson was wearing it when he crushed a three-run homer to beat the Milwaukee Brewers in Game 3 of the NLDS.

“I take them off when I sleep,” Pederson said on Oct. 11. “I got them through my jeweler. And, yes, they’re real pearls.”

But, in Game 3 of the World Series, the necklace broke. Stephanie Apstein of Sports Illustrated reported that Pederson had his jeweler flown to Atlanta with a replacement.

And, to a sigh of relief to the superstitious, Pederson has his pearls for Game 4.

In the National League park, the pitcher bats. Greinke will bat eighth in the lineup, ahead of catcher Martin Maldonado. That spot in the lineup puts Greinke in some rare company.

Zack Greinke is just the 2nd pitcher to hit above 9th in the lineup in the #WorldSeries.

Greinke only had two at-bats this season. He is a career-.225 hitter.

Checking in for Game 4.

Will Houston even the series tonight? pic.twitter.com/L6Kw0CFEYx

‘Like he never left’: McCollum sparks Trail Blazers
FIA to publish Abu Dhabi GP findings on March 18
O’Ree humbled, honored Bruins will retire jersey
‘Drawing Mike Trout every day until the lockout is over’ — How an MLB fan’s tribute turned into an internet sensation
How to watch the Latin America Amateur Championship on ESPN networks