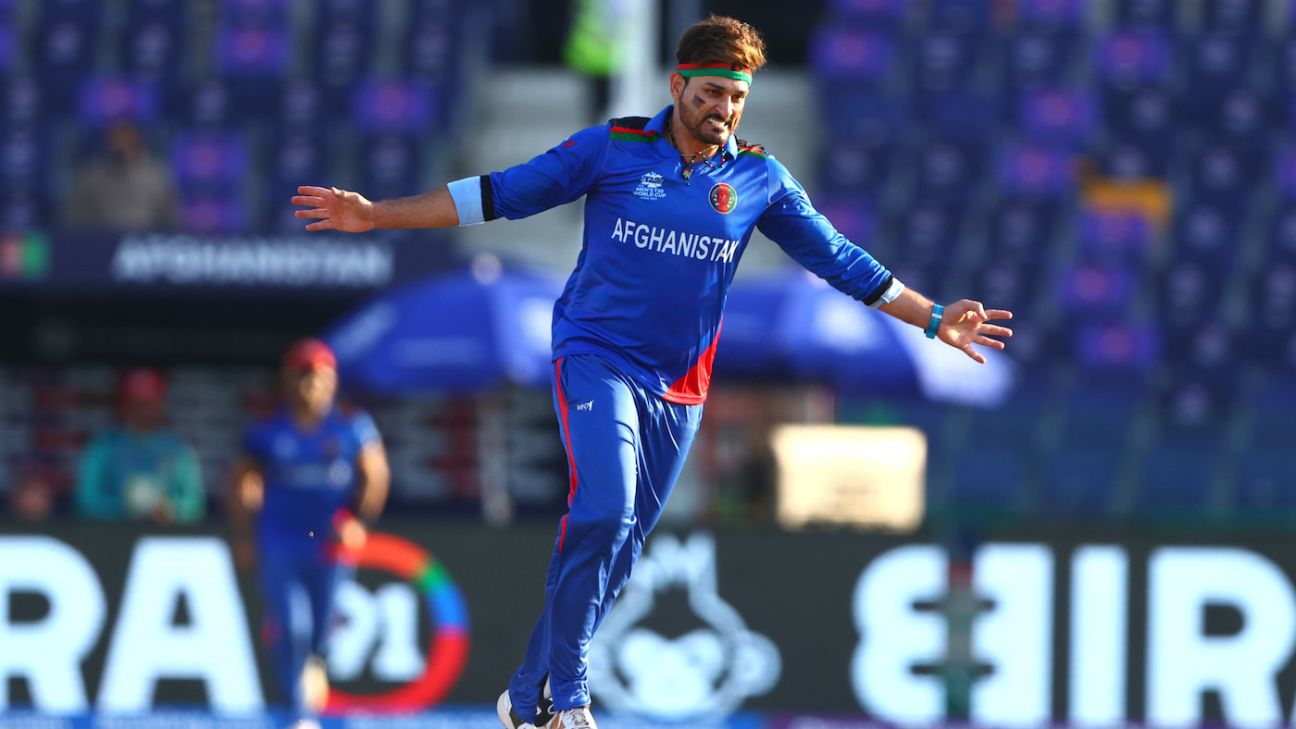 Two nights after running Pakistan close, Afghanistan proved their experience on the big stage was a bridge too far for Namibia. Asghar Afghan, Afghanistan’s most successful T20I captain, was given a winning send off into retirement as the team notched up their second win in three games to stay second on the Group 2 table.
A robust powerplay
Afghanistan swear by runs on the board template. And their approach so far has been to go hard in the powerplay. That didn’t change on Sunday as they raced to 50 for 0 in the first six. Denied much of the strike early on, Mohammad Shahzad played second fiddle to the burly left-handed Hazratullah Zazai. Namibia were in dire need of wickets as Ruben Trumpelmann, who took three wickets in his very first over in their last game, coming in for some tap from the openers.

The slowdown
Overs 7-10 brought just one boundary as legspinner Jan Nicol Loftie-Eaton cleverly used angles and deception in flight to spin a web. He troubled Rahmanullah Gurbaz with sharp legbreaks and then snuffed him out lbw with a full ball at the stroke of the 10th over. Shahzad fell soon after for 45, consumed by his own shot selection and heat as a strategically placed fly slip accounted for him in the 13th over.

The farewell
An emotional Asghar walked out to a guard of honour from the Namibians, and aware of the need to take the innings deep, like they did the other night, nudged the ball around until Mohammad Nabi came out to bat in the 16th over. While he looked comfortable to pick runs, Asghar couldn’t bring out the big hits, eventually falling to a failed scoop for 31 off 23. Afghanistan managed three fours and a six in the last two overs, all off Nabi, to eventually finish with 160 for 5, Nabi making 32 not out off 17 balls.

If you are in the USA, watch the Afghanistan vs Namibia highlights on ESPN+ here in English, and here in Hindi

The early strikes
Craig Williams was out fourth ball of the chase, toe-ending a lofted hit to mid-on. Then Michael van Lingen was deceived by a well-disguised back-of-the-hand slower one from Naveen-ul-Haq that he top-edged while attempting a half-hearted pull to short fine. They were 16 for 2 in the third over.

The comeback
Ravaged by injuries to his shoulder, back, ankle, knees, Hassan, at 34, is significantly slower in pace but tries and makes up for it with his control. Five years after last featuring in a T20I, he returned to pick up the big wickets of Gerhard Erasmus and JJ Smit, who was instrumental in finishing off their chase against Scotland. The chase had well and truly derailed at the halfway mark.

Then Rashid Khan, who came in to bowl in the eighth over, finished a spell in one go, for once not leaving his captain to worry about juggling his trump card, to finish with 4-0-14-1 to leave him one short of 400 T20 wickets. Barring David Wiese, none of the other Namibian batters offered any kind of assuredness. Eventually, he was taken out by Hassan with a superb yorker for a third wicket, by which time the Afghan party had well and truly begun.

Shashank Kishore is a senior sub-editor at ESPNcricinfo