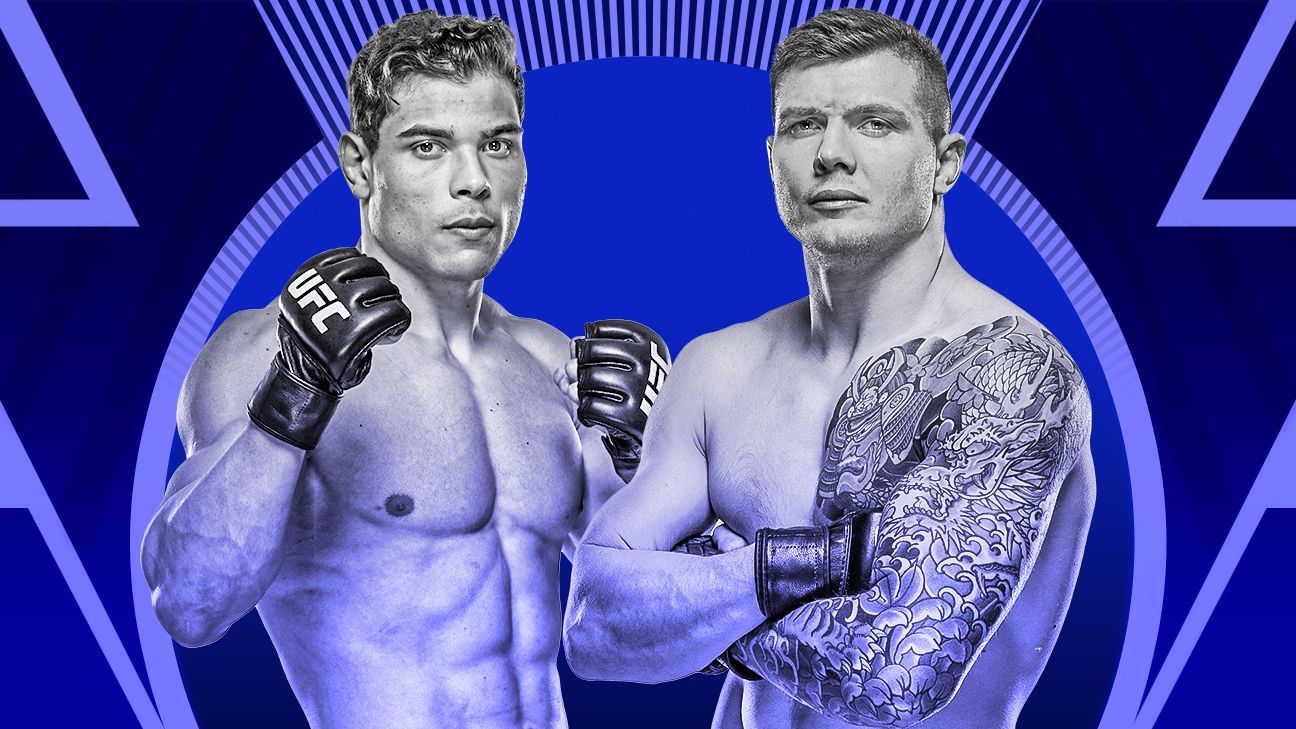 On its face, Costa vs. Vettori is an outstanding main event featuring two of the UFC’s top middleweights. Costa and Vettori are ranked Nos. 2 and 5, respectively, by the UFC. They’re Nos. 3 and 6 in the ESPN rankings.

As good as this matchup is, however, it’s worth pointing out Adesanya’s presence. Both Costa (13-1) and Vettori (17-4-1) are coming off losses to the champion — and frankly, neither appeared to handle the loss particularly well. How each of them will look in this first appearance back is a major question.

Paulo Costa and Marvin Vettori, both coming off unsuccessful challenges for the middleweight championship, meet to determine which contender will take the first step back toward another date with champion Israel Adesanya.

In the aftermath of his TKO loss to Adesanya in September 2020, Costa, 30, essentially said he was hungover during the fight, after drinking an entire bottle of wine the night before. He demanded Adesanya accept an immediate rematch, despite the fact he was out-landed in total strikes by 55 to 12. Costa has since pulled out of two scheduled fights, citing illness and contract issues. This week he alerted the UFC that he would not make the middleweight limit of 186 pounds for a nontitle bout, and Vettori agreed to adjust the fight, first to a 195-pound catchweight, then to the 205-pound light heavyweight limit.

Vettori, 28, suffered a unanimous decision loss to Adesanya at UFC 263 in June. At the conclusion of the five-round fight, Vettori felt he had done enough to win the fight — even though it was clear to virtually every observer that he’d come up short. Judges scored the championship fight a clean 50-45 sweep for Adesanya.

How much does either scenario mean moving forward? Most likely, they both matter very little. No one is doubting Costa or Vettori’s place at 185 pounds.

However, their individual reactions to those losses are part of the narrative heading into this main event. As long as Adesanya is the target at middleweight — he is expected to defend his title next against Robert Whittaker in the first quarter of 2022 — he will likely be seen as holding a mental advantage over Costa and Vettori.

The winner of Saturday’s high-profile, fan-friendly contest can stifle that narrative a bit, though, as this matchup truly is seen as two of the absolute best squaring off.

Saturday’s fights are on ESPN+, with the main card starting at 4 p.m. ET and prelims at 1 p.m.

11: Knockouts by Costa among his 13 career fights, including four KO/TKO wins since 2017, tied for the most in the UFC middleweight division over that time. Adding in his one submission victory, Costa has a finish rate of 92%. Nine of his wins have come by first-round finish.

0: Fights in which Vettori has been finished during his 23-bout career.

Why it’s not a middleweight fight

Paulo Costa and Marvin Vettori discuss what weight they plan to fight at in Saturday’s UFC Fight Night main event. 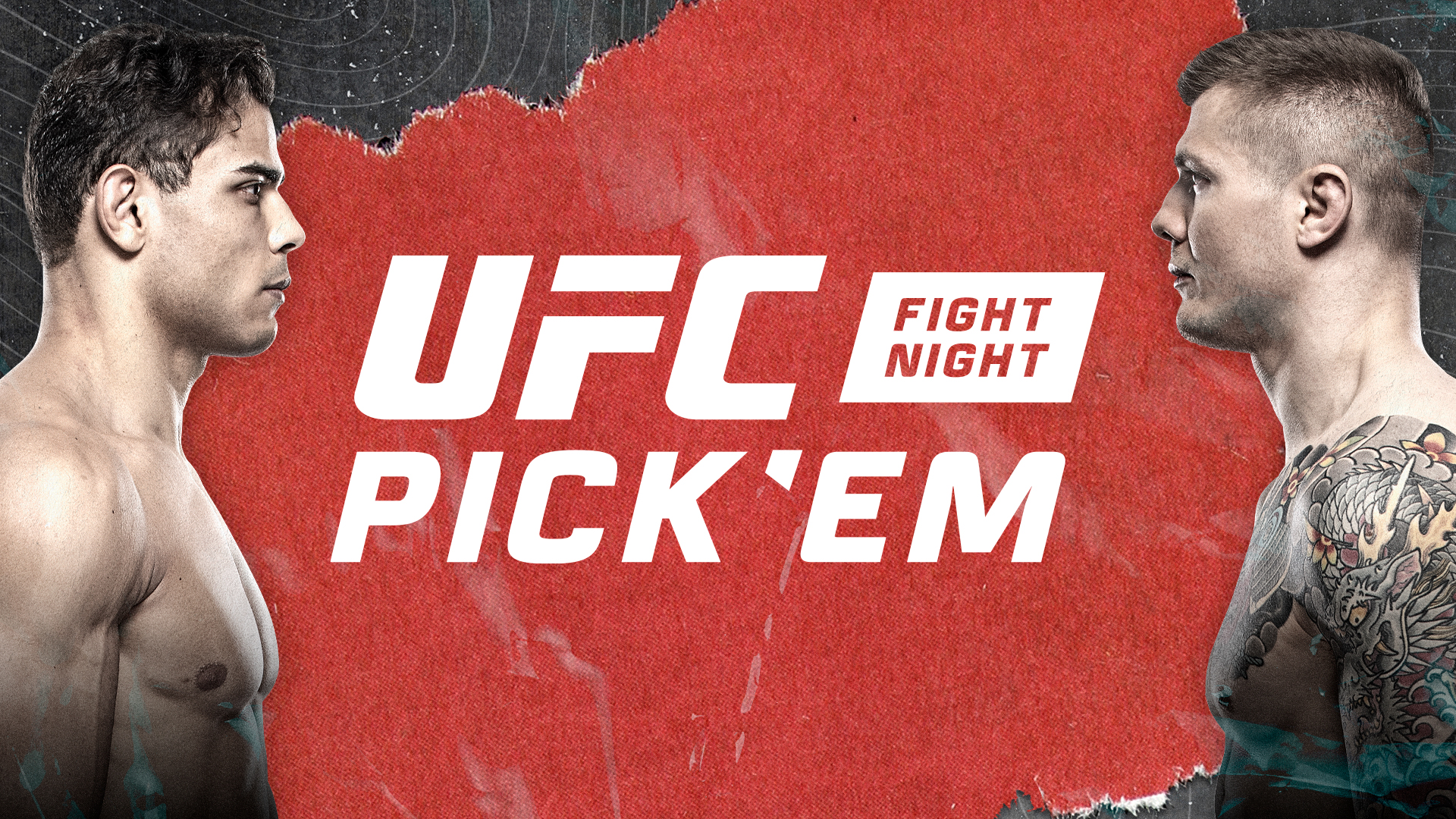 Play for a chance to win a streaming of UFC 268 for FREE! Make Your Picks

And the winner is …

“Israel Adesanya has had good experiences with both guys. He fought Vettori twice,” James Krause, UFC welterweight and a coach at Glory MMA, said. “He said Costa is going to beat Vettori. I don’t know if there’s emotions to that, but he thought Costa was going to stop the takedowns. Who else knows these two better? So, I’m going to ride with Izzy on this one.”

Check out how Krause and other experts break down the main event and predict a winner.

After a year-long layoff since his TKO loss to Israel Adesanya, Costa returns to the cage, looking to prove to the world that he still belongs at the top of the division. In order to win, Costa will have to do something that no opponent has been able to do to Vettori: knock him out. Costa has a ton of power and can end the fight at any point. However, I don’t see the fight going that way. Vettori has never been finished, and I don’t believe that starts now.

Look for Vettori to come forward and dictate the pace. Vettori’s cardio and output will be his biggest advantages, as Costa tends to slow down and throws with power only one punch at a time. Vettori will also have the edge in the wrestling department, which he can fall back on if he decides to put Costa on his back, completely taking away his power. If Vettori keeps up the pace over five rounds, I don’t see Costa being able to keep up.

For more tips from Parker on this fight card’s best bets, go here.

Watch all of the fights on ESPN+. Download the ESPN App

Don’t have ESPN+? Get it here.

1. Grant Dawson will be trying to keep an unbeaten UFC run going when he takes on lightweight Ricky Glenn in the co-main event. Dawson, a Dana White’s Contender Series alum from Season 1, is 5-0 since making his debut in 2019.

Monday through Friday, host Pablo Torre brings you an inside look at the most interesting stories at ESPN, as told by the top reporters and insiders on the planet. Listen

2. Francisco Trinaldo, who fights welterweight Dwight Grant, has won 16 fights since his UFC debut in 2012, tied for sixth most of any fighter over that time. Grant has won three of his last four.

3. Both Alex Caceres and Seungwoo Choi are riding winning streaks into their featherweight bout. Caceres has won four straight fights and Choi three.

4. Jeff Molina made an explosive UFC debut in April, winning a decision over Aori Qileng on the strength of connecting on 189 significant strikes, the most in a flyweight fight in UFC history and the most by a fighter making a UFC debut in any weight class. Molina faces Daniel Lacerda on the prelims.

Bold predictions for the end of 2021 in MMA, including a defining moment for Rob Font
Sources: Blachowicz to return vs. Rakic in March
UFC’s White says he tested positive for COVID-19
‘It’s going to get ugly for those guys’: How the lockout could hurt MLB’s midtier free agents
Britain’s Konta announces tennis retirement