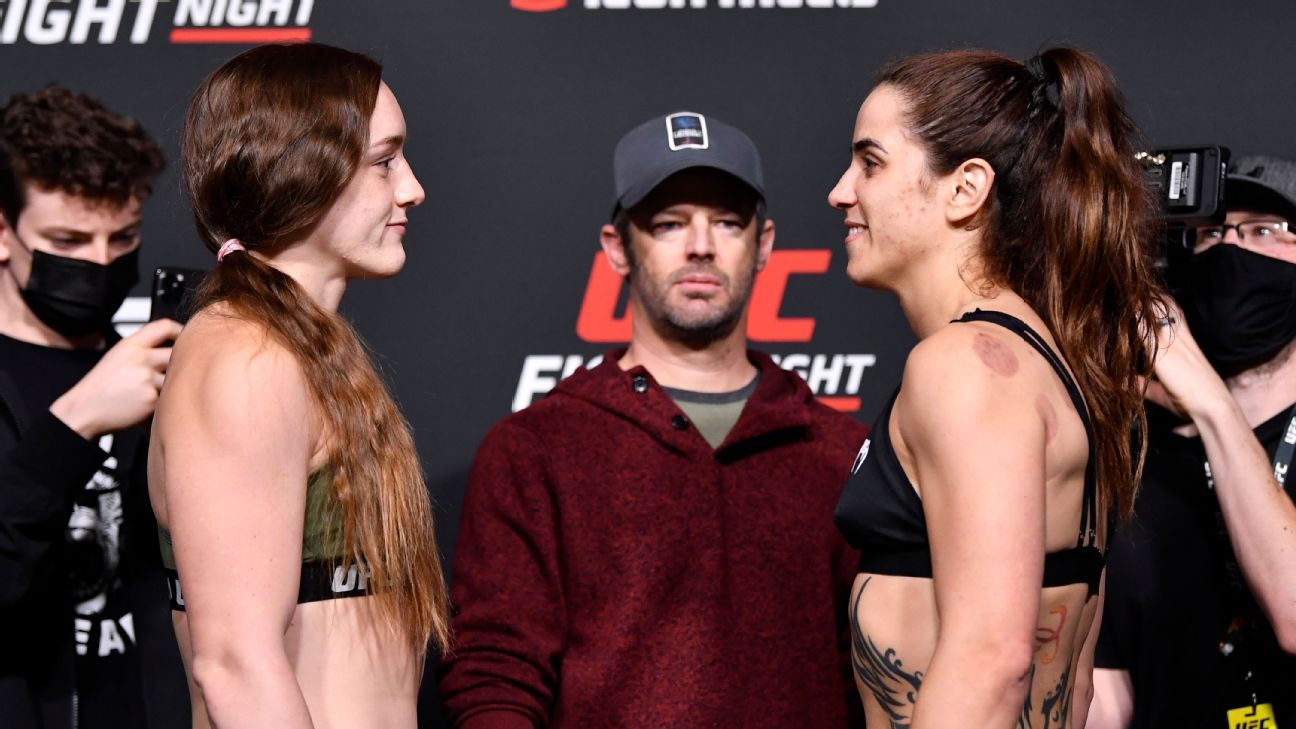 The UFC’s women’s featherweight division is in an interesting spot, in that one terrific performance at 145 pounds can catapult a fighter into title contention.

That is the backdrop for Saturday’s main event, featuring Aspen Ladd (9-1) and Norma Dumont (6-1). Both Ladd and Dumont have competed in the UFC’s 135-pound division, but this fight will be at featherweight, where it may not take much to get into position for a title shot against Amanda Nunes.

Ladd, of Pioneer, California, was actually supposed to fight Macy Chiasson two weeks ago at bantamweight, but the bout was canceled after she missed weight. She didn’t have to wait long for this opportunity, however, as Dumont’s original opponent, Holly Holm, was forced off of this UFC Fight Night card with a knee injury.

The winner of this Ladd vs. Dumont main event is certainly not guaranteed a featherweight title shot by any means, but will be, at the least, in an exclusive group of potential candidates.

Follow the action below with Marc Raimondi and Jeff Wagenheim or watch the fights on ESPN+.

The storyline coming into this bout had been focused on Godinez, who made UFC history by fighting on a seven-day turnaround — the shortest stretch in the promotion’s history. But what about Carolina, who was stepping into the cage with her third scheduled opponent for this date?

Carolina, who is 28 and from Brazil, is a tall fighter who is best when competing at distance. And she made that possible on Saturday by utilizing improved defensive wrestling to fend off 13 of Godonez’s 15 takedown tries. That made it possible for her to build a 53-23 edge in significant strikes, on the way to earning 29-28 scores from all three judges. Carolina has won three of her four UFC bouts.

Dang Loopy’s a G, answered my call when Ribas pulled out of our fight before she was in the ufc, fought Jess on a week’s notice, smoked a girl last week and now almost pulled off a 1st round armbar 1 week later at 125. Wish more strawweights were this game to fight hoes. 👏🏾👏🏾👏🏾

Godinez, a 28-year-old from Mexico who fights out of Vancouver, British Columbia, was coming off a first-round submission win over Silvana Gomez Juarez on Oct. 9. The modern-era record for shortest time between wins is 10 days by Khamzat Chimaev, who achieved the feat last year. That particular mark lives on in the UFC record books.

The UFC has its first legitimately promising up-and-comer from Mongolia ready to take a leap up in competition.

Batgerel stopped Davis via TKO at 2:01 of the first round, after a big overhand right put Davis down. Batgerel followed with big shots to Davis, who struggled to recover on the ground. Referee Herb Dean had no choice but to step in and stop Batgerel’s onslaught.

This is the 32-year-old Batgerel’s third straight first-round KO/TKO, all in the last seven months. Batgerel, who fights out of JacksonWink MMA in Albuquerque, New Mexico, was coming off a 50-second TKO over Kevin Natividad at UFC 261 in April. Davis, a 31-year-old Georgia native, was making his return to the UFC after two years away, during which time he had put together a four-fight winning streak on the regional circuit.

For much of this fight, you couldn’t slip a piece a paper between these two fighters from Brazil. That was the way Carnelossi needed it to play out, and she made sure to smother Nunes from start to finish.

The 28-year-old Carnelossi, facing a striker with an advantage in reach and standup skills, got takedowns in all three rounds as Carnelossi kept Nunes clinched against the cage for long stretches. She did not do a whole lot with that positional control, however, until midway through the final round, when she took the fight to the canvas and quickly locked in a rear-naked choke. Carnelossi elicited the tapout at 2:57 for her 14th win in her last 15 bouts.

Girls are throwing heat to start the card ! 🔥 #ufcvegas40 @ufc

Nunes, 29, was making her UFC debut in her first fight since the summer of 2018. She got the better of exchanges from distance, but each time Carnmelossi closed in and seized control.