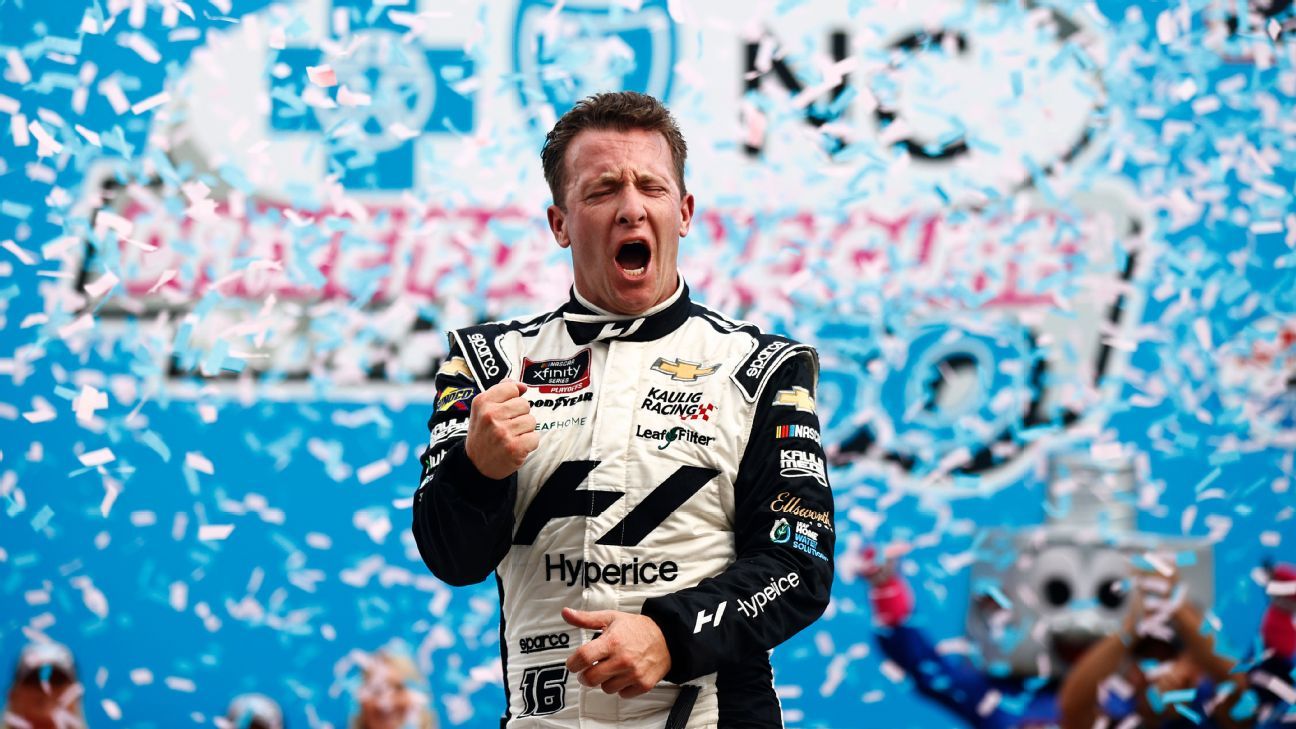 CONCORD, N.C. — AJ Allmendinger charged into the second round of the Xfinity Series playoffs with an overtime victory Saturday in the elimination race on The Roval at Charlotte Motor Speedway.

Allmendinger remained a perfect 3-0 on the hybrid road course/oval added to the NASCAR schedule in 2018. He wasn’t in the inaugural race, won by Chase Briscoe.

Allmendinger took the lead for the first time with 20 laps remaining and had the win in sight when Tommy Joe Martins brought out the caution with four laps remaining. It pushed the race into overtime for a two-lap sprint to the finish, and Allmendinger got the jump on the restart and cruised to a 3.192-second victory over reigning Xfinity Series champion Austin Cindric.

Allmendinger, the regular-season Xfinity Series champion, collected the checkered flag and gave it to a young fan in the Charlotte grandstands wearing an Allmendinger shirt. It was Allmendinger’s fifth win of the season, tying his career high set in 2006 when Allmendinger raced in Champ Car.

The crowd chanted “AJ! AJ! AJ!” for the popular journeyman who was partially retired in 2018 and now racing for his first NASCAR championship.

Jeb Burton, Myatt Snyder, Jeremy Clements and Riley Herbst were all eliminated from playoff contention as NASCAR cut the Xfinity field from 12 to eight. All four eliminated started the race on The Roval below the elimination cutline.

Cindric was the only driver locked into the next round after non-playoff drivers Josh Berry and Brandon Brown won the first two playoff races. With the win, Allmendinger reclaimed the lead in the Xfinity standings.

‘Drawing Mike Trout every day until the lockout is over’ — How an MLB fan’s tribute turned into an internet sensation
Sources: Simmons status unchanged as sides talk
Guardiola hits back at Tuchel’s COVID claim
Sources: Gastelum, Imavov to fight at UFC 273
Kingsbury expects career-best game from Murray