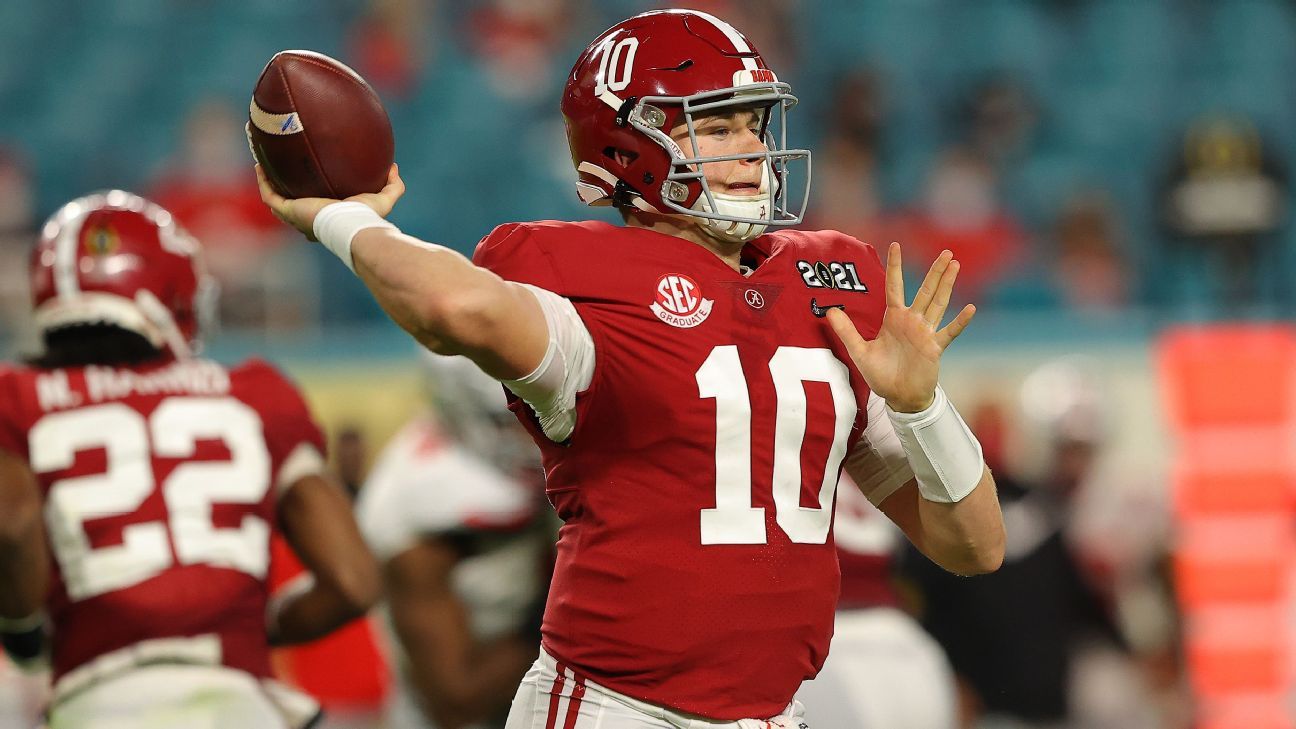 CHARLOTTE, N.C. — The NFL is in the midst of a feeding frenzy in terms of trading for established quarterbacks.

The Detroit Lions swapped Matthew Stafford for the Los Angeles Rams‘ Jared Goff, a pair of future first-round picks and a third-rounder this year, and the Philadelphia Eagles traded Carson Wentz to the Indianapolis Colts for a third-round pick this year and a conditional 2022 second-round pick that could turn into a first-rounder.

It could explode if the Houston Texans, who so far have eschewed suitors, grant 2017 first-round pick Deshaun Watson his wish to be traded.

The Carolina Panthers would be among many teams interested.

Watson, who is 25 years old and proven, is at a different talent level than other quarterbacks — such as the Bears’ Mitchell Trubisky and Nick Foles, the 49ers’ Jimmy Garoppolo, the Jets’ Sam Darnold and the Raiders’ Derek Carr — who have been the subject of trade rumors.

The Panthers went 4-11 with Teddy Bridgewater as the starter in 2020. He was 0-8 in games in which he had a chance to win or tie on the final possession. That the team was willing to offer the No. 8 pick in this year’s draft, a fifth-rounder and Bridgewater for Stafford is evidence they are ready to move on from the three-year, $63 million deal Bridgewater signed a year ago.

But the frenzy isn’t simply because the Panthers and other teams searching for a franchise quarterback saw perennial cellar-dweller Tampa Bay win this year’s Super Bowl with Tom Brady. It’s because using a first-round pick on a quarterback to get to the so-called “promised land” is a huge leap of faith.

It doesn’t guarantee you’ll get close.

Drafting QBs is risky … even in the first round

Fifty-nine quarterbacks have been drafted in the first round over the past 20 years. Five — Eli Manning (two), Ben Roethlisberger (two), Joe Flacco, Aaron Rodgers and Patrick Mahomes — have won a Super Bowl with the team that selected them.

That Brady, a sixth-round pick by New England in 2000, has won seven titles and kept others from succeeding has to be factored in.

But Super Bowl victories, or even getting to the title game, aren’t the overriding factor Hall of Fame general manager Bill Polian and others in the league consider when judging success for a first-round quarterback.

It’s how many times you reach the conference championship game. Only 19 of the 59 have gotten that far, a whopping 67.8% failure rate.

Using that standard, which Polian admits is “restrictive” and not the same criteria he uses for non-quarterbacks taken in the first round — one that’s based on specific performance metrics — it’s a colossal disappointment considering his failure rate for first-round picks at all positions is 40%.

Polian adds criteria because the quarterback, more than any other player, can control the game. He grades the success of others based solely on performance over a five-year span.

Polian and some NFL insiders believe teams reach for quarterbacks more than any position, understanding you can’t win a Super Bowl without a good one. In most cases, a very good one.

Polian calls it overdrafting. Others call it pushing.

Veterans such as Brady and even Stafford are a known quantity. Brady helped a Tampa Bay organization that was 49-95 the previous nine seasons to an 11-5 regular-season record and a championship. The Rams are hoping Stafford, who went 0-3 in playoff games for what Polian called a “dysfunctional” Detroit franchise after being selected first overall in 2009, can help them make the same leap.

The Rams were so set on upgrading the position they traded away Goff and two future first-round picks, even though Goff helped lead them to the Super Bowl just two seasons ago. They did this understanding first-round quarterbacks are selected on potential and have flaws, some of which are unknown. Seldom do you see a quarterback come into the league and win a Super Bowl in their third season as Mahomes did in Kansas City.

“Reaching for a quarterback is dangerous,” Polian said.

That’s why the Panthers were willing to make the trade offer for Stafford; why they’ve cleared more than $20 million in cap space to get to $31 million available to build around whoever calls signals.

That’s why teams likely will have to give up at least three first-round picks and a star player to get Watson if the Texans give in and trade him.

Polian and others agree it’s safer than, in Carolina’s case, using the eighth pick on one of the top college prospects not named Trevor Lawrence, who is expected to go to Jacksonville at No. 1.

“When the quarterbacks are pushed up via noise, via demand, the absolute need to get one, then mistakes happen,” Polian said. “The failure rate is built into the system because it’s judging human beings on potential.”

“It’s funny; if there’s one position you shouldn’t reach for it’s a quarterback,” Nagy said. “Because if it’s not the right guy, that really sets the franchise back.”

Beane heard the critics question Buffalo’s decision to move up to No. 7 to pick Wyoming quarterback Josh Allen in 2018. Many agreed he had a cannon of an arm, but his accuracy (56% completion rate in two college seasons) and inexperience against major conference competition made him a risk.

Allen didn’t help his cause by completing 52.8% of his passes as a rookie and 58.8% in his second season.

This past season he lived up to the “freakish talent” ESPN draft analyst Mel Kiper Jr. referred to three years ago. Allen completed 69.2% of his passes and led the Bills to a 13-3 regular-season record and the AFC Championship Game.

Beane was convinced from the start Allen would succeed based on two years of review and interviews. He was ready to commit by surrounding Allen with talent, as he did last year with the trade for wide receiver Stefon Diggs.

Again, that doesn’t always work out.

“When those opportunities are there for guys, you just take them because you got them on such a cheap salary and you can [afford to] put weapons around them,” said Beane, who gave Tampa Bay the 12th pick and two second-round picks to move up five spots for Allen. “But you can’t force it if you’re not convinced.”

Outside of Lawrence, opinions vary

Kiper puts Lawrence in the same category as he did Andrew Luck in 2012 and Peyton Manning in 1998, as sure things as the No. 1 overall top pick. Most draft analysts agree there’s a big gap between Lawrence and the next four quarterback prospects. Polian said maybe two of those next four deserve to go in the top 10 based on talent and grades. One NFL insider called Ohio State’s Justin Fields a “huge leap” and put a fourth-round grade on him.

Kiper added this year’s top-tier quarterback class outside of Lawrence has flaws.

Kiper said BYU’s Zach Wilson had shoulder surgery in 2019, only one great college season and played a “very, very soft, cupcake schedule.” He said the issue with Fields is “going through his progressions and finding receivers.” Kiper said North Dakota State’s Trey Lance has had only 17 career starts, against lower-level competition — including one game in 2020 — and didn’t have great accuracy. Kiper likes Alabama’s Mac Jones and has him going to Carolina in his latest mock draft, but admitted “he’s not a running threat at all” and “not a great athlete.”

Still, teams will be eager to draft all four quarterbacks. In fact, Kiper has five QBs going in the first nine picks of that mock draft, something that has never happened in the common draft era (since 1967), according to ESPN Stats & Information.

It could pay off, as it has for Kansas City trading up for Mahomes, Baltimore moving up for Lamar Jackson and the Bills for Allen. But for every success story the landscape is filled with misses such as Josh Rosen, Blaine Gabbert, Tim Tebow, Josh Freeman, Brady Quinn and Trubisky.

Most top-five picks by position
NFL draft, past 10 years

“Quarterbacks in the last 10 years have been — and I hate this term but I can’t think of a better one — very overdrafted,” Polian said. “And Mitch Trubisky is the prime example. Not to knock him. I hope he goes on to have a good career.

“But you take a guy who started 13 games in college and put him at the top of the draft, it makes no personnel-assessment sense.”

Chicago traded the No. 3 pick and a third-rounder to San Francisco to take the North Carolina quarterback at No. 2 in 2017. Trubisky has a winning record (29-21) overall, but is 0-2 in the playoffs.

Now the Bears appear ready to move on. They reportedly made an offer to get Stafford, and likely will do the same if Watson becomes available.

Kiper understands why there’s so much interest in acquiring proven veterans over first-round picks. He noted 22 quarterbacks were taken in the first round from 2009 to ’16 and none are with the team that drafted them.

“Quarterbacks get pushed,” Nagy said. “There’s a lot of pressure on front offices to hit on a guy. And there’s not any patience anymore for that guy to work out and develop. So it’s gotten really tough to draft and develop at that position.”

Nagy saw it firsthand when he went from New England to Kansas City with general manager Scott Pioli.

“We built a pretty good roster there, and we traded for Matt Cassel in year one [2009],” he said of the 2005 seventh-round pick by the Patriots, who went 10-5 in 2008 after Brady suffered a season-ending knee injury. “We never drafted one, and four years later we were shown the door.

“We had six Pro Bowlers and two wins on our roster because we didn’t have a quarterback.”

That’s the flip side. If you don’t take a chance on a quarterback in the first round, you may miss an opportunity.

For example, former Carolina coach Ron Rivera took a chance on an unorthodox-but-dynamic Cam Newton with the top pick in 2011 and wound up in the Super Bowl in the 2015 season.

The Chiefs, who were 11-4 with Alex Smith as their starter in 2016, moved from pick 27 to 10 for Mahomes in 2017. Mahomes has led the team to two consecutive Super Bowl appearances and three straight AFC title games.

“You never want to be shown the door and look back and say we never took our shot,” Nagy said.