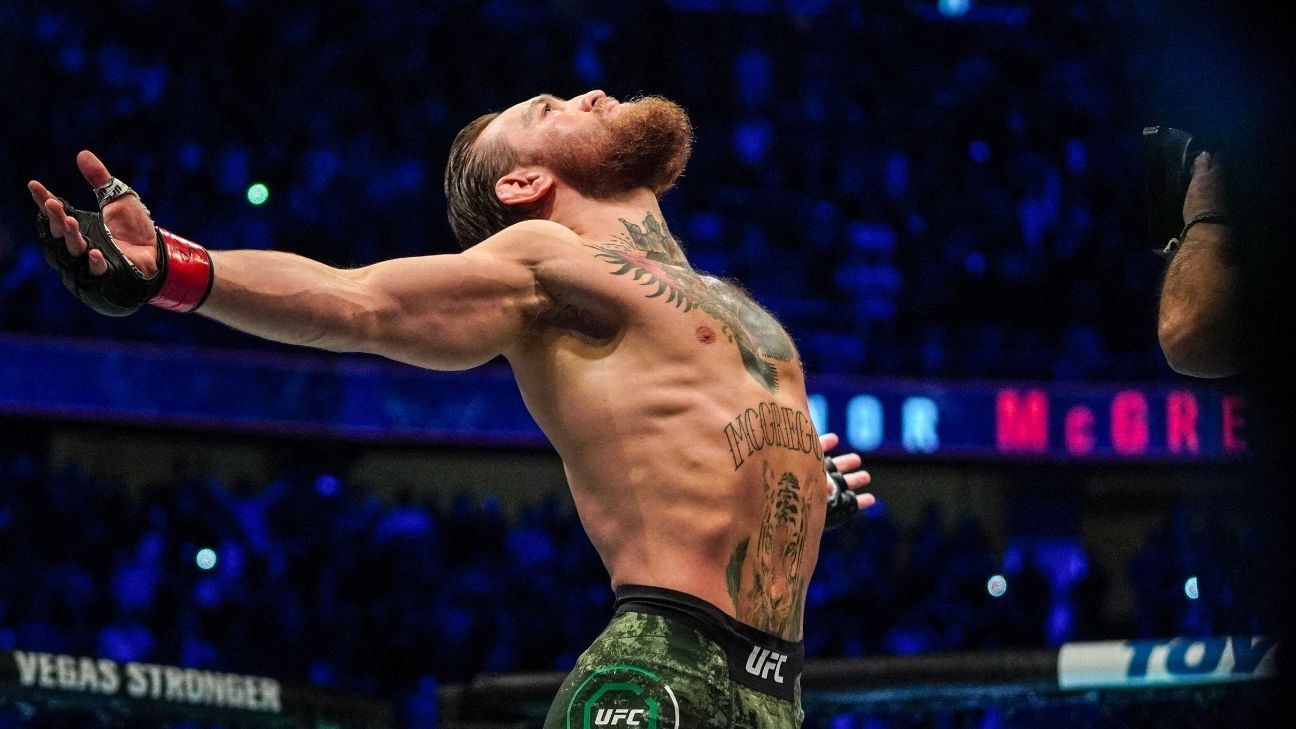 It was moments after his electrifying 40-second TKO of Donald Cerrone in Las Vegas. We were in his locker room inside the T-Mobile Arena. He was happy, but not overly so. Excited. Somewhat emotional. Most of all, he seemed appreciative of the moment after all of his trials and tribulations over the past couple of years.

One thing he was not was satisfied.

Conor McGregor will return to the Octagon for the first time in a year in the UFC 257 main event. The former two-division UFC champ will take on Dustin Poirier in a fight that could decide the next lightweight title challenger. The bout also is a rematch from their meeting at UFC 178 in September 2014, a first-round TKO victory for McGregor.

McGregor said on multiple occasions leading up to that fight that he planned on fighting at least three times in 2020. Quite the feat in its own right, considering he had not fought three times in a year since 2016.

But that schedule — and those big plans — were canceled in March when the pandemic hit.

McGregor, whose 2019 was punctuated by legal problems and a retirement, reinvented himself in 2020. He turned into a passionate advocate for measures to combat the spread of the pandemic, including a strict lockdown of Ireland.

He filmed videos addressing his fellow Irish men and women, almost statesman-like, encouraging them to stay at home, or at least practice social distancing and wear masks.

He donated millions of dollars in personal protective equipment to local hospitals. He filmed his home workouts. For the first time in what felt like a while, McGregor, who witnessed so many of his loyal Irish fans turn on him due to his self-inflicted blunders and legal trouble the previous year, was leading by example.

Then the fights came back, but McGregor didn’t. He grew frustrated. He retired again. He released direct messages from UFC president Dana White. His 2020 “season” ended up being those 40 seconds of fight time.

It was all so disappointing.

And so, when I virtually sat in front of him on Thursday morning, I in New York and he in Dubai, I wasn’t sure which McGregor I would be talking to as we discussed Saturday’s UFC 257 main event vs. Dustin Poirier on “Fight Island.”

I’ve been talking to McGregor since 2013, prior to his UFC debut. I’ve witnessed and chronicled the extreme highs and lows of the McGregor era, each appearance exposing a different side of the self-proclaimed face of the fight game.

Forced to guess which side would show up this time, I would have said an irritated one. One who felt he just watched a prime year slip away. One who felt he was benched by the powers that be for no good reason. One who was also cutting to 155 pounds for the first time since 2018, so, of course, that would bring a level of stress too.

Boy, was I wrong.

What I got was a relaxed McGregor. A slouched McGregor, void of his familiar perfect posture. He was wearing a new custom suit — with slippers. His kids were running around. His fiancée nearby.

He was happy to be back. Excited about the training camp that appears to have him in great shape. And most surprisingly, he wasn’t irritated at all. What it will mean Saturday is uncertain. Is a calmer, more disciplined McGregor a better fighter? He was against Cerrone, but Poirier is a clear step up. McGregor said his camp before losing to Khabib Nurmagomedov in 2018 was undisciplined, so he’s putting himself in the best position to succeed.

“I feel it should be for a title, but I’m not surprised, not disappointed. With the way the year went, I don’t think I was going to walk into a title shot straight away, you know?”

“I had a great 2020, I had a great performance,” McGregor said. “I opened the show, highest pay-per-view, highest gate, fastest main event knockout, and an extravagant blockbuster event that set the UFC off on a trailblazing run. And I’m very happy about that, very proud of that.

“As you said, I was satisfied, but not overly satisfied. I was ready to continue, and it didn’t go that way. I still have that inside me. I’m still ready to go. I’ve kept up my preparations and I’m back, and I’m very happy to be back in 2021. We’re going to replicate this. I’m starting the year, first pay-per-view of the year. And I’m really excited about that.”

It was clear from the start of the interview that he didn’t feel like drumming up the drama of the past year. He kept repeating the word “positive.” He reiterated he and White — who have butted heads publicly and privately numerous times over the past years — were in a great place, echoing White’s recent statements.

“We were at loggerheads probably the most we’ve ever been in 2020,” McGregor said. “I felt some things were wrong that were done toward me. I did some things wrong for sure. We got it off our chest, and we’re back to where we’re at, and I’m pretty happy with that.

“I’ve got a lot of admiration for Dana. What he’d done in 2020 against all odds was quite admirable. And, you know, I would have loved to have been a part of it more, but I’m happy that I started the year. We came through, and we’re in a great place now.”

Conor McGregor says everything is in the past and he’s in a great place with Dana White. He also gives him credit for how he navigated 2020.

McGregor didn’t even want to make a big deal out of the fact this fight won’t be for the title, even though the champion, Nurmagomedov, said he’s retired.

“I feel it should be for a title, but I’m not surprised, not disappointed,” McGregor said. “With the way the year went, I don’t think I was going to walk into a title shot straightaway, you know?

“I’m happy to be back here. And I look forward to getting in and competing on the night.”

Despite the positive energy, McGregor’s trademark trash talk wasn’t far from the surface, especially when it came to Nurmagomedov. Avenging losses is important to McGregor, and he might not get that chance against Nurmagomedov, who retired on Oct. 24 after beating Justin Gaethje.

Nurmagomedov, who beat McGregor on Oct. 6, 2018, lost his father, Abdulmanap, to a heart ailment complicated by the coronavirus in July, and he said he promised his mother the Gaethje fight would be his last. McGregor, who acknowledged Nurmagomedov’s family situation and wished him well, isn’t ready to put the rivalry on the shelf.

“I think he’s afraid to fight me,” McGregor said. “That’s for damn sure.

But if I’m being honest, I didn’t get the sense McGregor is itching to fight any particular person after Poirier.

He has told us for years the opponent didn’t matter. Sometimes I believed him, other times not so much. This time? I definitely believed him.

In the end, what I saw was a motivated, calm, cool and collected McGregor.

Even the notion of a mostly empty arena, devoid of the rabid fan base that follows him around the globe, didn’t disappoint him. In fact, he was hoping the Etihad Arena would be completely empty — there will be 2,000 fans — so the sound of his punches and kicks could make more of an impact.

“I would have loved that,” he said. “There’s going to be a couple of thousand fans in, but my power will still translate. It will be like there is still no one in the arena.”

Last year, prior to the Cerrone fight, I noted McGregor was in a zen-like state. But it was a stiff zen-like state, if that makes sense. He had an intense energy to him. I didn’t sense that this time around. I sensed pure calm.

Seven years ago, McGregor had to get by Poirier to be viewed as a featherweight contender.

On Saturday, he’ll have to get by him again to be viewed as a lightweight contender.

There are similarities, but the differences are more dramatic. McGregor isn’t engaging in the trash talk he used in 2014 to disrupt Poirier’s focus. Instead, he’s pledging to donate to Poirier’s “Good Fight” charity foundation.

“How could I not respect Dustin?” McGregor asked. “One for [his charity work], and two for how he handled the last loss and how he came back and how he rose up and became a champion. That’s admirable in my book, and I’m very excited to get in and compete with him.”

Conor McGregor breaks down his strategy going into his fight with Dustin Poirier and whether he would prefer a long drag out over a quick knockout.

And McGregor is not mapping out what a perfect year would be for him, as he did when we spoke last January. “That didn’t work out so well the last time,” he said. “Let’s just say competition is what I’m after here, good competition.”

That doesn’t mean he no longer thinks ahead. McGregor talked about wanting to finish the Nate Diaz trilogy, possibly at lightweight, and about boxing Pacquiao later this year, and he still hasn’t given up hope for the Nurmagomedov rematch. The goal remains to be active, with three or four fights this year.

But that’s down the line. Whereas last year he followed his win over Cerrone with talk of which opponent will be next, now he’s envisioning a different scenario for when his fight ends Sunday morning, local time.

After the turbulence of 2020, setting an attainable goal probably isn’t a bad idea.