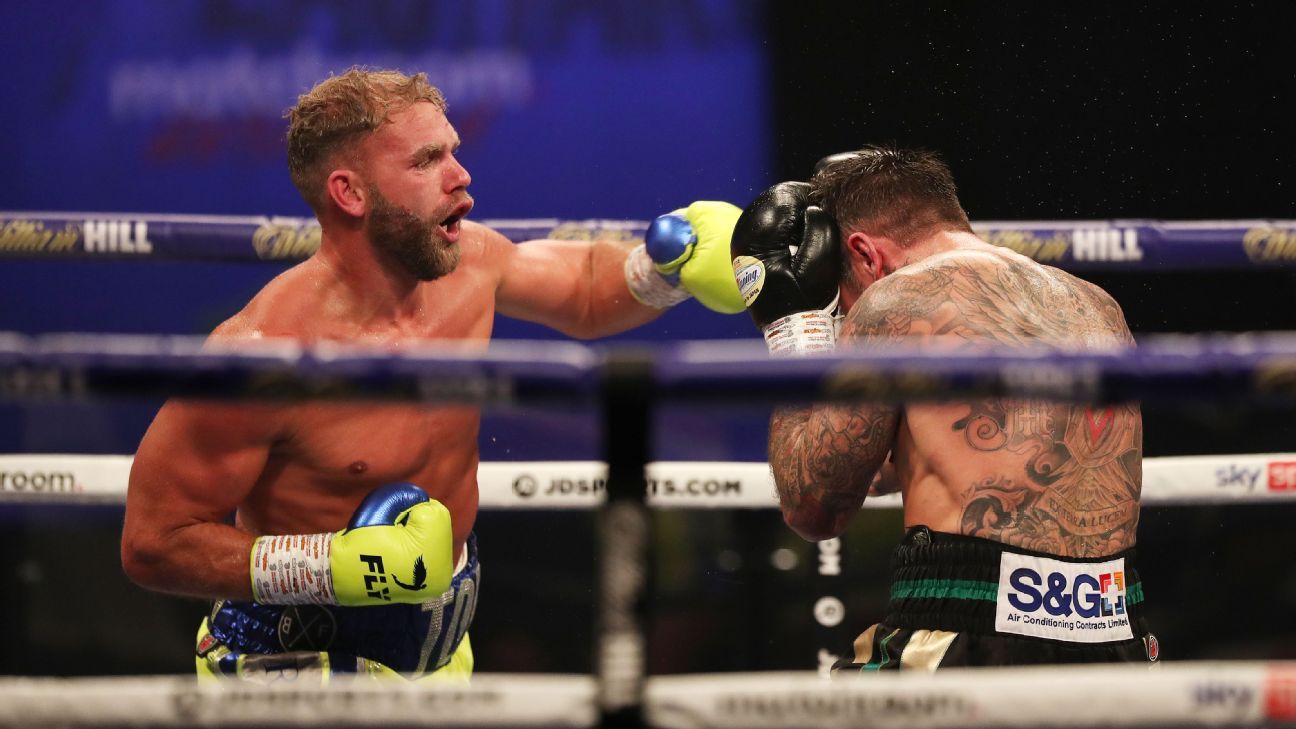 Saunders (30-0, 14 KOs), a former world middleweight champion, had been linked with a fight against Alvarez (53-1-2, 36 KOs) earlier this year, but the coronavirus pandemic disrupted those plans.

“It’s not a performance I’m going to be calling people out for,” Saunders said, but that seemed a bit too critical.

Saunders, 31, from Hatfield, still hopes to face Canelo in 2021, assuming the four-weight world champion gets past Saunders’ fellow Englishman Callum Smith (27-0, 19 KOs), who holds the WBA version of the world super middleweight title, in a fight at the Alamodome in San Antonio on Dec. 19.

“Everyone wants Canelo; I hope Smith beats him, but based on that performance, I hope he [Canelo] takes it,” Saunders said. “Let’s see if I can get a big fight that I can get up for and put a shift in. It’s important for me to stay in the gym; I feel I’m in my prime. The stamina was there, but the timing was a bit off. Canelo, Smith, Demetrius Andrade — I need a big fight to get up for.”

For Murray (39-6-1, 17 KOs), it was a familiar story. The likable 38-year-old from St. Helens lost a fifth shot at a world title after unsuccessful attempts against Arthur Abraham, Gennady Golovkin, Sergio Martinez and Felix Sturm (draw). Murray justifiably can feel he should have been crowned world champion in some of the earlier title shots, especially against Sturm in 2011, but he was completely dominated by Saunders.

“I was going to retire two years ago, but I knew there was a big fight left in me,” Murray said. “I’ve had five shots at the world title. I’m not going to get six. I think that’s it.”

Southpaw Saunders, who knocked out Marcelo Esteban Coceres in Los Angeles in his last previous outing 13 months ago, can be inconsistent in his form, but he was razor sharp throughout against Murray, landing sharp combinations from start to finish.

The third round was impressive for Saunders, whose fast jab repeatedly pierced Murray’s guard, also getting through with a couple of uppercuts. Saunders had his own way in the fourth round too, and when he landed three straight shots, Murray stumbled forward and was fortunate not to be given a count.

Saunders was in good condition and maintained the pressure through the fifth and sixth rounds with his slick combinations while Murray was limited to single shots on the counter. Murray had some success late in the sixth and through the seventh, but he had to take a big right uppercut in the eighth as well as a lot of straight jabs.

Saunders put more venom into his shots in the ninth round and varied his combinations in the 10th when it seemed a pointless task for Murray. Saunders caught Murray with a sweet left uppercut after attacking the body in the 10th, and he finished the fight in cruise control.

On the undercard, Northern Ireland’s James Tennyson (28-3, 24 KOs) raced to a 134-second win over Josh O’Reilly, who was floored twice before the Canadian was stopped on wobbly feet. Tennyson, who lost to American Tevin Farmer for the IBF world junior lightweight title two years ago, is now set for another world title shot after easily winning this eliminator for the WBA lightweight title, held by Teofimo Lopez along with the other three belts.

Tennyson (16-0, 6 KOs), 27, has now registered six stoppage wins since losing in five rounds to Farmer in Boston and is in top form. Tennyson began landing heavy shots from the first bell, hurting O’Reilly with hooks and right uppercuts.

“I feel a lot stronger, so the move up has helped massively,” Tennyson said.

Promoter Eddie Hearn said a clash with former champion Jorge Linares would be a good next step for Tennyson before challenging the likes of Americans Lopez and Gervonta Davis.

English bantamweight Shannon Courtenay (6-1, 3 KOs) knocked Poland’s Dorota Norek (6-2, 1 KO) off her feet and through the ropes with a perfect right hand to seal a seventh-round knockout win.