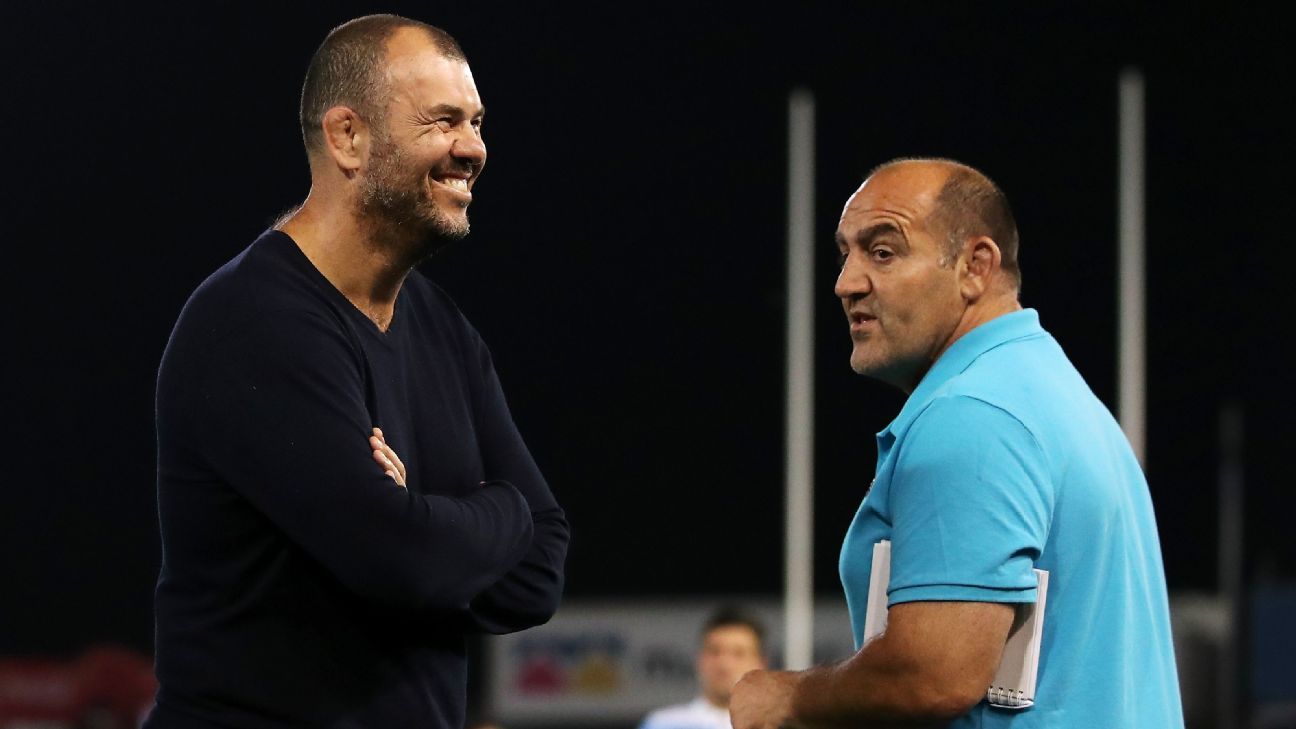 Former Wallabies coach Michael Cheika hasn’t given up hope of one day returning to the role, despite a lack of success across his closing years in charge and an ugly fallout with Rugby Australia.

Speaking to The Australian, Cheika has clearly lost none of the self-belief that helped fire the Waratahs to a maiden Super Rugby title and then drove the Wallabies to the 2015 Rugby World Cup final.

“I think that in a different set of circumstances things would be different,” Cheika told The Australian. “We were very close to winning it [the World Cup] at one time. You have to believe in yourself.”

Cheika was unable to produce the same spark at Test level between 2016 and 2019, culminating in Australia’s embarrassing 40-17 quarterfinal defeat by England in Japan last year.

Knowing his contract would not be extended, Cheika announced he was stepping down as coach the following day.

Cheika found work with Sydney Roosters in the NRL this year, before he then joined Argentina’s staff for the Tri Nations, which will pit him against the Wallabies for a second time when the tournament wraps up at Bankwest Stadium on Saturday.

The Pumas drew with Australia 15-all a fortnight ago, while Cheika can claim another win over the All Blacks on his resume after Argentina recorded their historic first Test win over New Zealand the week prior.

It’s clear that Cheika has lost none of the drive to coach at Test level and, as a proud Australian, would love another shot at coaching the Wallabies sometime down the track.

“So, no business person has ever failed and not come back, not achieved a target and not come back?” Cheika told The Australian. “People focus on the negatives. We had plenty of wins. I still want to coach now. I love it, I love being part of the sport.

“When we made the World Cup (in 2015) and lost the final, my thoughts were about succeeding in 2019. It didn’t happen. But do you sulk about it or let it beat you or come back stronger? Everyone moans that people are not resilient. Why would I ever try to [hide] from the past, from the honour of coaching an international team?

“Maybe that’s where society has positioned itself – go hide under a rock if something doesn’t go your way. As a leader, if I am not showing fight and resilience, how can I expect others to be resilient?”

There has been plenty of fallout since Australia’s quarterfinal exit.

Cheika’s public run-in with then-RA chief executive Raelene Castle in Tokyo was first exposed, before selector Michael O’Connor lifted the lid on some of the things he had seen at Wallabies training and said that Cheika almost always got his way when it came to selection

During his time as Wallabies coach Cheika was also heavily criticized for a seemingly one-dimensional all-out attacking game plan and declared he didn’t do much study on the way opposition teams were playing. The Wallabies largely became a predictable outfit as a result, with England steamrolling their way to victory in his final game in charge.

Current Wallabies coach Dave Rennie has moved the team to a more rounded approach that involves the much derided box kick as a key weapon, while the wider Test game is, ironically, at the centre of a debate around the lack of entertainment it is providing.

England coach Eddie Jones, who was at one stage sounded out as potential replacement for Cheika, this week said supporters needed to “enjoy the defensive cycle” of the game as it would eventually shift back to an environment where attack could flourish.

Cheika’s captain at the 2015 World Cup, Stephen Moore, meanwhile told ESPN that it was the responsibility of the players to perform and that blaming a poor game plan was an easy excuse.

“I think it’s a bit unfair to say to Cheik that his game plan was wrong; he was a very successful coach when he coached in Australia,” Moore told ESPN. “He won a Super Rugby title; the Waratahs were very very strong when he was the coach and he did very well with the Wallabies, although it was probably disappointing with the World Cup last year.

“But I obviously played under Cheik a lot and I had no issue with his game plans, you’ve just got to go out and play well, don’t you? It’s easy to say ‘well that was the game plan and that was the problem’, but players have got to go and play.”

Proving he is happy to go wherever the work takes him, Cheika will next year coach Lebanon at the Rugby League World Cup.