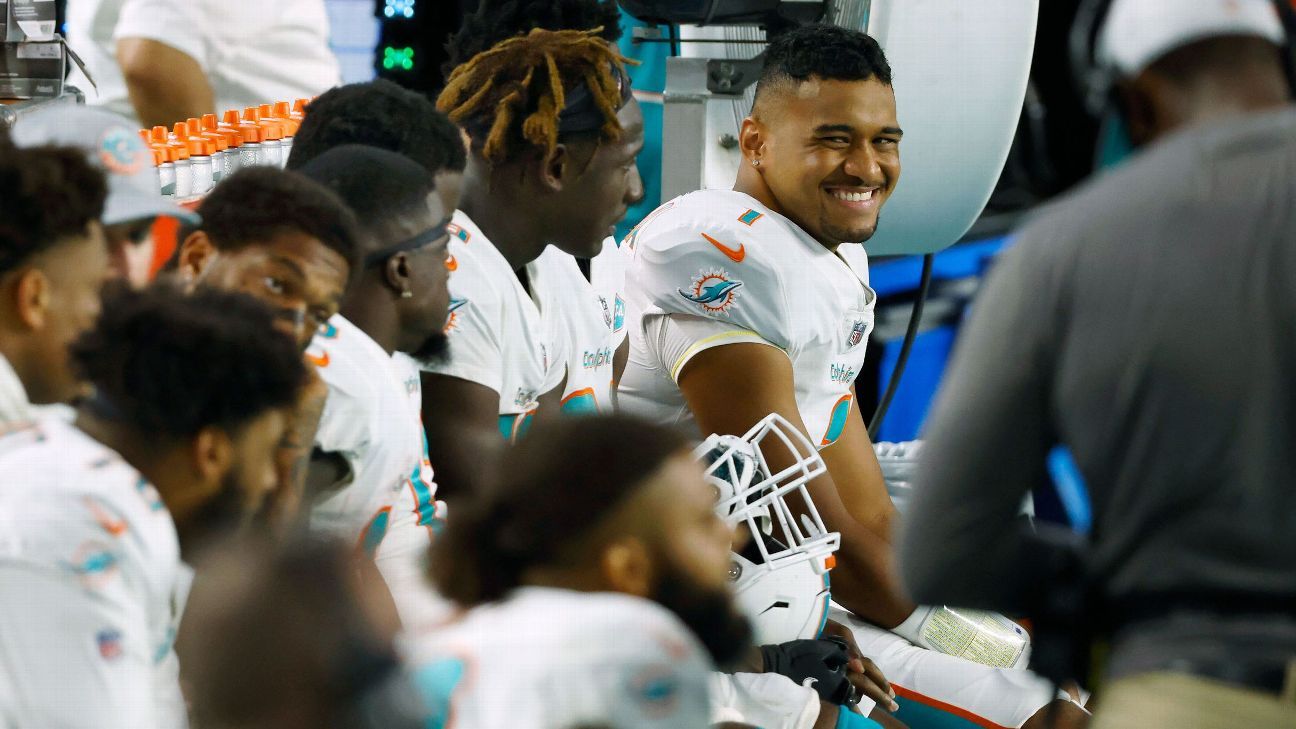 Following a week of debating the Miami Dolphins‘ sudden change at quarterback, the Tua Tagovailoa era begins at home Sunday against the Los Angeles Rams (1 p.m. ET, Fox). Whether the timing is the best or not, Tagovailoa’s first start will be one of the most anticipated moments of the NFL’s Week 8 schedule.

There are many questions surrounding the Dolphins’ quarterback situation, including concerns about Miami’s 2020 No. 5 overall pick, veteran Ryan Fitzpatrick and how the roster change “broke his heart” and what to expect from it all going forward in 2020.

It’s clear expectations are high for the rookie, and Tagovailoa’s teammates are doing little to quiet the hype.

“For Tua to get the opportunity to start, that kid is incredible. I’m looking forward to going out there and playing with him on Sunday,” Dolphins defensive end Shaq Lawson said. “I’ve seen a lot of him in practice, how athletic he is, how incredible of a player he is. You get to see it Sunday this week. It’s going to be incredible. He’s going to lead his team in the right way.”

Here are some burning questions headed into the start of Tua Time:

What should we expect from Tagovailoa?

There’s a need to be realistic for a rookie making his first pro start at quarterback, especially one who has overcome a career-threatening hip injury suffered in November 2019.

Fitzpatrick was playing well for the 3-3 Dolphins, and he’s very comfortable within the scheme. It should not be a surprise to see a Tagovailoa-led offense take an initial step back.

What we do know is Tagovailoa can make all the throws, including some Fitzpatrick can’t. Tagovailoa’s athleticism provides a new element, and he has spent the past few months soaking up everything from the 16-year veteran QB and 68-year-old offensive coordinator Chan Gailey.

“Obviously, throwing, making plays, [he’s] everything you want in a quarterback,” Dolphins receiver Preston Williams said. “Y’all seen his tape — that speaks for itself.”

Lawson added: “He’s so dangerous. He’s athletic. You wouldn’t think he’s a rookie if you watch him in practice. He looks like he’s been around a long time.”

How will morale be affected by the change and Fitzpatrick’s emotional response?

Coach Brian Flores has control in the Dolphins’ locker room, particularly after all the ups and downs during last season’s 5-11 campaign. There likely won’t be an issue, because as long as Fitzpatrick fully embraces Tagovailoa as the starter, the rest of the team will follow suit. And if Tagovailoa plays well, it’s a non-issue either way.

What will be worth watching is if neither happens — Fitzpatrick isn’t all-in on his new role and Tagovailoa struggles out of the gate. Those issues will likely bring up second-guess whispers and test the Dolphins’ chemistry. Flores said he isn’t worried about any division. Tight end Mike Gesicki, who is best friends with Fitzpatrick, said he doesn’t foresee an issue arising.

“Our locker room, it’s tight. We all believe in one another and believe in Coach Flores and [GM] Chris Grier and [owner] Mr. [Stephen] Ross and everybody that is upstairs making decisions. We all have confidence in Tua to go out and make plays,” Gesicki said. “It’s not going to be like, oh, one series here, one series there and everybody is throwing in the towel. That’s not how it is.

“We’re all excited, and honestly, I think there’s a lot of trust, a lot of belief in the players that are being put in position on the field on Sundays.”

Domonique Foxworth believes the only team that makes sense trading for Ryan Fitzpatrick is the Browns, while Ryan Clark says the Dolphins are better off holding on to him.

Why did the QB change happen now?

This move was more about Tagovailoa and his long-term development than Fitzpatrick’s play. It’s notable Flores mentioned Grier and others were involved in the decision, which indicates this was just as much an organizational choice as a team one for this season.

The Dolphins’ plan all along, it seems, was to play Tagovailoa once they deemed him ready, and they didn’t need to wait for Fitzpatrick to lose the job before they did so. Tagovailoa has improved in practice, the team views him as healthy and the organization sees more value in getting him game experience now rather than riding the Fitzpatrick wave any longer.

How should Tagovailoa handle being thrown into action during the playoff hunt?

Dan Orlovsky, an ESPN analyst and 13-year NFL quarterback, offered up some advice for Tagovailoa taking over a team that’s in the thick of the AFC East postseason race:

“The first thing is go in with zero expectations. You can put undue pressure on yourself — this is a 3-3 football team and you lose your first game, you don’t want the thought of, ‘Did I just fail my team?’ He’s got to have a long-term viewpoint of this as well. Two, you got to realize you just have to play your part. You have to be one of 11. This team isn’t asking you to be Superman right now. It isn’t asking you to carry this offense. You’ve got to be willing to be Steve Nash, just distribute the football and let the other guys make the plays.

“Finally, understand it is football and you’re playing the same game you have your whole life. Put everything you can into your preparation, take a deep breath and go play ball. Don’t overthink things. Tua’s strength is his reactions, his instincts — he’s been groomed for this for a long time.”

Will the offense change with Tagovailoa under center?

Don’t expect the Dolphins’ offense to transform overnight, but one can expect Tagovailoa-specific plays to evolve as weeks go on. Gailey and quarterbacks coach Robby Brown have been working with Tagovailoa weekly to determine what he feels comfortable with and have found some plays to install that are similar to what he ran at Alabama. Along with those college plays, the Dolphins will likely employ more run-pass-option plays, quick timing routes and vertical shots, as those fall under Tagovailoa’s strengths.

Is Tagovailoa physically ready to be hit, starting with Aaron Donald and the Rams?

Getting tackled is the last hurdle Tagovailoa has to clear, and it’s not a pleasant thought to think of Donald being the first one to do so. If the Dolphins had any worry about Tagovailoa’s health, they wouldn’t feed him to the two-time NFL Defensive Player of the Year for his first start. Tagovailoa and the team believe he’s 100 percent healthy.

It’s worth noting Fitzpatrick has the third-fastest time to throw (2.41 seconds) of any NFL quarterback. This might be the most important stat for Tagovailoa to duplicate as the team tries to protect him behind an improving but young offensive line.

Matthew Berry says, in standard ten and twelve-team leagues, there are better QBs than Tua Tagovailoa on the waiver wire, but he would definitely pick up Tua in deeper leagues.

Can Tagovailoa lead the Dolphins to the playoffs?

Playoffs?!? The fact the Dolphins are worthy of being mentioned in the conversation is credit to how far they have come after being the NFL’s laughingstock over the first half of the 2019 season. The Dolphins are in second place in the AFC East, 1½ games behind the Buffalo Bills and one game out of the final wild-card spot currently held by the Indianapolis Colts.

ESPN’s Football Power Index gives the Dolphins a 28.2% chance to make the playoffs, ninth best in the AFC. So, you’re saying there’s a chance? Yes, if Tagovailoa plays well, the Dolphins, boosted by a solid defense, could make a playoff push with a manageable slate of games that ranks 18th among FPI’s remaining strength of schedule.

The most likely scenario is circling 2021, not 2020, for the playoffs. Regardless, the Dolphins’ rebuild is headed in the right direction.