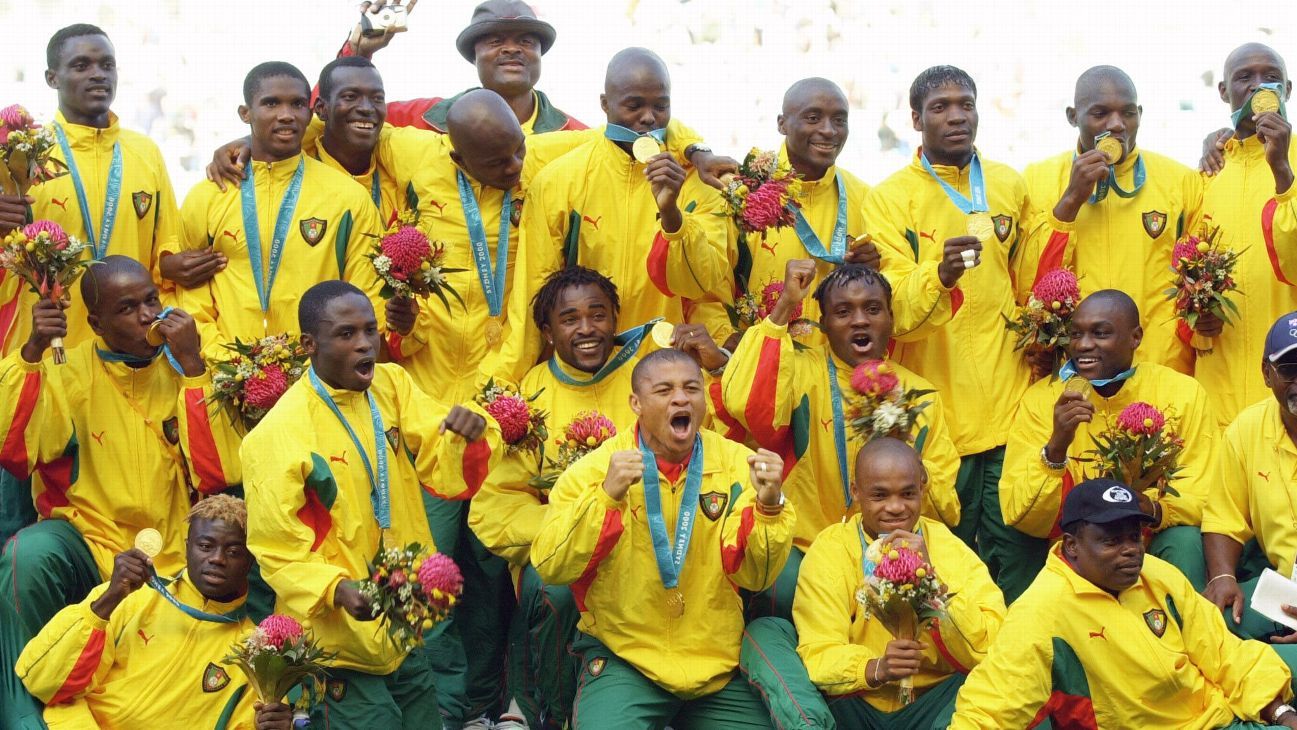 Twenty years ago today, Cameroon‘s Olympic football triumph at the 2000 Games in Sydney was one of the Indomitable Lions’ finest hours on the world stage as the unfancied Central African nation dispatched Brazil and Spain en route to clinching the Gold Medal.

A decade after they became the first African team to reach the World Cup quarterfinals, and in the midst of the back-to-back Africa Cup of Nations triumphs in 2000 and 2002, Cameroon’s success in Sydney was a sensational achievement for a fine generation of talent.

After a fairly lacklustre group stage, they stunned Ronaldinho and Brazil in the quarters, then dispatched Nigeria‘s vanquishers Chile in the semifinals to set up a final showdown with Spain.

In front of 104,000 supporters at the Olympic stadium in Sydney, Cameroon, inspired by none other than Samuel Eto’o, came back from two goals down to level at 2-2, before clinching the Gold Medal on penalties when Ivan Amaya struck the crossbar for La Roja.

“It was only when we were there that we realised, as the matches went on, that we could write another chapter in our history.

“As the matches went on, a belief in our ability to win began to develop, and that’s how we knew we could do it.”

After Nigeria’s success at the same stage in 1996, Cameroon’s triumph prompted optimism that Africa’s national sides could reach new heights in the new millennium.

However, while four members of the Spain team — Xavi, Joan Capdevila, Carles Puyol and Carlos Marchena — would be World Cup winners in 2010, none of Africa’s sides have bettered Cameroon’s run to the World Cup final eight in 1990, nor emulated their Olympic success in Sydney 20 years ago.

GK: Carlos Kameni — Heralded as the latest great Cameroon goalkeeper in a long line that includes the likes of Joseph-Antoine Bell, Thomas N’Kono and Jacques Songo’o, Kameni has amassed 73 caps for the Indomitable Lions but endured a long spell in the international wilderness after concerns were raised about his attitude. At club level, the 36-year-old spent 13 years in La Liga with Espanyol, with whom he was a Copa del Rey winner in 2006, and Malaga, and is currently without a club after leaving Fenerbahce in 2019.

GK: Daniel Bekono — The first black player to captain a side in the Bulgarian top flight, Bekono moved to Beroe in 2003 after beginning his career in his homeland. Bekono moved to CSKA Moscow in 2008, becoming a title winner two years later, before being sacked by the club for disciplinary reasons.

DEF: Aaron Nguimbat — Three-time Latvian champion with Skonto Riga, the defender featured in the Champions League with the now defunct club before later moving on to Indonesian side Sriwijaya FC. The ex-defender subsequently opened a clothes shop in his homeland.

DEF: Patrice Abanda — Scored an own goal against Chile in the semifinal, but secured a move to Czech heavyweights Sparta Prague in the aftermath of the Olympics. His progress pivoted with a medical at Dynamo Kyiv, when he was diagnosed with hepatitis, changing the trajectory of his career.

“Abanda played in Cameroon but increased his level [of performance] when we reached the tournament,” Suffo remembered. “It’s possible that things could have been different for him, and that without his problems he could have had a very respectable career.”

The former centre-back, a member of the Lions’ 1998 World Cup squad, returned to his homeland where he since worked for the national bank of social welfare and pensions, and, according to Suffo, plays for the bank’s team.

DEF: Serge Branco — An unlikely signing who was largely forgotten by Leeds United fans, the midfielder was sacked less than a fortnight after joining the Yorkshire heavyweights in 2004, with manager Kevin Blackwell unimpressed with his fitness. Branco previously spent six years in Germany making a handful of appearances for VfB Stuttgart and ended his journeyman career in 2014 after spells in Poland, Bahrain and Kuwait. Branco currently lives in Germany, and has worked as a football agent and TV consultant since retirement.

DEF: Pierre Wome — Perhaps Cameroon’s greatest ever left-back, Wome played in four of Europe’s major leagues, taking in spells with the likes of Fulham, Espanyol and Werder Bremen. He was part of the Internazionale team that won the Serie A title in 2006, but ended his long international career under a cloud in 2005 when he missed a 95th-minute penalty against Egypt in a decisive World Cup qualifier. Cameroon missed out on qualifying for Germany, and Wome later accused Eto’o and captain Rigobert Song of lacking the courage to step up and take the spot-kick. After retiring from the game in 2016, he was appointed sporting director at Cameroon giants Canon Yaounde in 2017.

MID: Modeste M’bami — The hero of the quarterfinal when he came off the bench to net the golden goal against Brazil that sent Cameroon into the semis.

“We knew there were players of a great reputation, like Ronaldinho and Alex,” said Suffo of the meeting with Brazil. “It wasn’t the easiest, but we played without pressure and we told ourselves that we would play to our strengths, have fun, and give the best of ourselves.

“If [Modeste had] missed [the golden goal], I would have had it.

“I was right there with the play, he a little more advanced than me, and I lived that moment as if I had been the one to have shot.

“It was incredible, simply magnificent. I experienced that in my heart.”

M’bami later enjoyed success at Paris Saint-Germain and Olympique de Marseille in the decade after the Olympics. He subsequently moved on to Spain, China, Saudi Arabia and Colombia, and last year rejected an invitation to take over as the Indomitable Lions team manager, blaming the poor relationship between the federation and players.

MID: Lauren — The Gunners legend began his career as a right winger — featuring in this role during the Games — before being converted to a right-back by Arsene Wenger after moving to Arsenal. He was a member of the Invincibles, winning two titles and three FA Cups across six seasons in North London, before winning the domestic cup again with Portsmouth in 2008. Since retirement, he’s worked as a TV pundit with the likes of Sky Sports and ITV.

MID: Geremi Njitap — A Champions League winner with Real Madrid in 2000, Geremi was an unused substitute in the final as Valencia were defeated. He’d leave the Bernabeu to clinch a pair of Premier League titles with Chelsea under Jose Mourinho, before moving on to Newcastle United. Technically gifted, Geremi was also celebrated for his versatility and his work rate. He’s recently been celebrated by CAF among their African football legends.

MID: Nicolas Alnoudji — An AFCON winner in 2002, Alnoudji secured a move to Paris Saint-Germain but ultimately never made a league appearance for the French giants. The defensive midfielder spent the rest of his career traipsing around Europe and Asia, retiring in 2013 after playing for Maltese side Gudja United.

MID: Serge Mimpo — One of the squad’s allocation of “overage” players, Mimpo had already played in Greek football with Panachaiki before winning gold in Sydney.

“[Coach Jean-Paul] Akono knew him particularly well because he’d managed him at club level, so he knew he could rely on him whatever the situation was,” Suffo said.

“Knowing the player so well influenced his choice.”

He later moved to France and enjoyed six years in the lower leagues with Paris FC, before retiring in 2013. The 46-year-old made one appearance for Cameroon’s senior side — a 2002 World Cup qualifying defeat by Angola — and coached the reserve team of French club USA Clichy after calling time on his career.

MID: Clement Beaud — The central midfielder who spent nine years in Portuguese football after earlier time in Poland and Lithuania.

FW: Daniel N’Gom Kome — A right winger whose career was affected by a severe knee injury, Kome moved from his homeland to Atletico Madrid‘s B team in 1999 and spent 12 years in Spain before retiring prematurely. Since calling time on his career, the 40-year-old has become a businessman in his homeland, focusing for several years in the local distribution of Spanish beer Mahou.

FW: Joel Epalle — The 2002 AFCON winner who also represented Cameroon at the World Cup in that same year, Epalle moved to Greece ahead of the Olympics. He spent his peak years at German club VfL Bochum, once helping Die Unabsteigbaren to an away draw at Bayern Munich in the Bundesliga, and ended his career after a brief spell with Malaysians Sarawak FA. The 42-year-old subsequently tried his hand at coaching, taking the reins at Seine-et-Marne-based amateurs Val d’Europe FC as well as an ill-fated spell as Clarence Seedorf‘s assistant with the national side.

ST: Samuel Eto’o — Arguably Africa’s greatest player ever, Eto’o won three Champions League titles, with Barcelona and Internazionale, scoring in two finals. He was present for both of Cameroon’s AFCON successes at the turn of the century, and retired last year as the all-time top scorer at the tournament and for the Indomitable Lions. One of the most visible Cameroonian personalities on the planet, Eto’o has launched his own academy in his homeland and has recently taken a role as advisor to CAF president Ahmad Ahmad.

ST: Patrick Mboma — The powerful, prolific striker who had a nomadic career in Europe with Paris Saint-Germain, Sunderland and Parma, while also tasting life in Japan with Gamba Osaka, Tokyo Verdy and Vissel Kobe. He ended his international career with 33 goals in 57 outings, and currently works as a pundit for Canal+.

ST: Albert Meyong Ze — Currently working as an assistant manager with Portuguese Primeira Liga side Vitoria, the frontman was the top scorer in the 2005-06 Liga NOS season when he netted 17 goals for his current employers. He also enjoyed prolific stints with Belenenses and Braga, and enjoyed an Indian summer in Angola with Kabuscorp before rounding off his career with his beloved Vitoria. Last year, Meyong even held the reins of the Setubal side in a caretaker capacity following the dismissal of Sandro Mendes.

ST: Patrick Suffo — Suffo netted four goals en route to the gold medal in Sydney, having earlier been on the books of Barcelona B. The creative frontman’s time in France with Nantes was undermined by disciplinary issues, and he fared little better in England with Sheffield United where he was one of the chief antagonists in the “Battle of Bramall Lane” — a mass brawl during a league game against West Bromwich Albion. He retired in 2012 following a second stint with Coventry City, having played for over a dozen clubs during his senior career.

Manager: Jean-Paul Akono — Akono received extensive plaudits for masterminding Cameroon’s success in 2000, and for overseeing the development of a swathe of exciting young talents. However, like many of his players, the former international struggled to translate that early success to the senior side, with two separate stints with the full Indomitable Lions — either side of a spell coaching Chad — ending briefly.