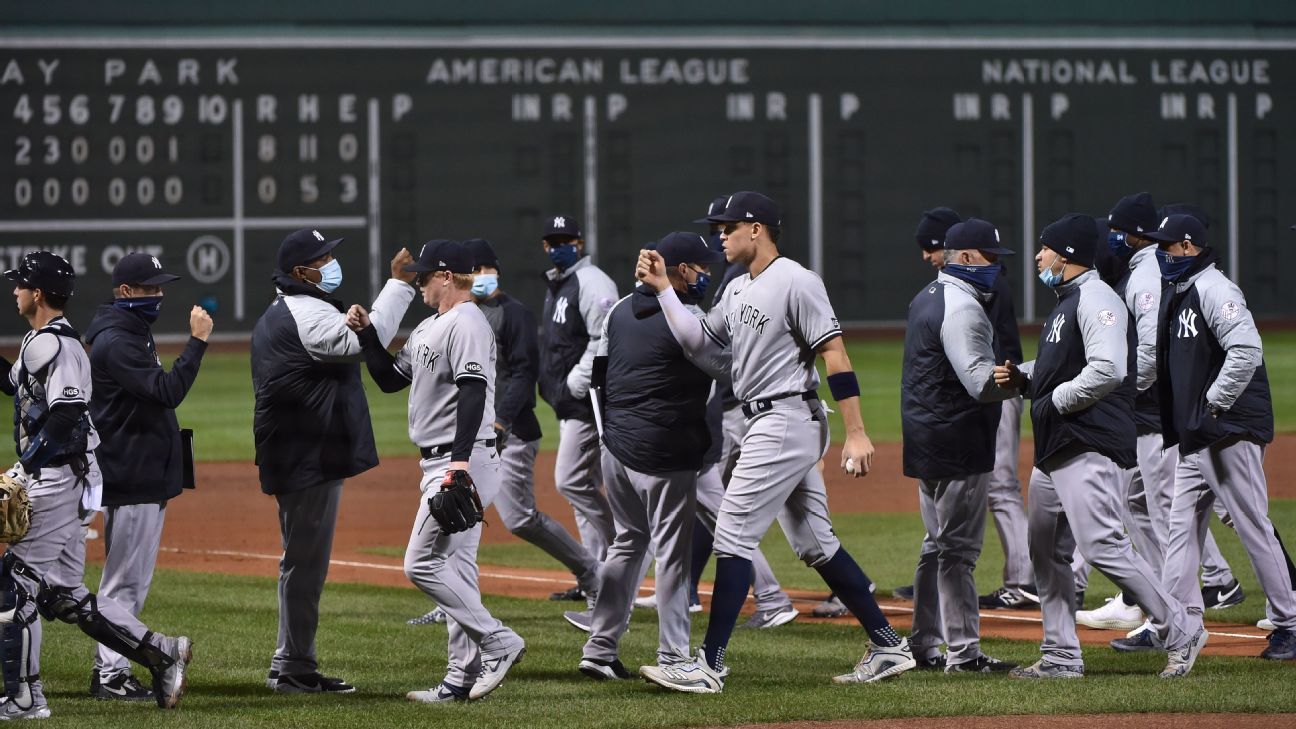 BOSTON — The New York Yankees–Boston Red Sox rivalry is considered one of the greatest in all of sports.

But in the past two years, it has certainly turned into a one-sided affair. And this weekend, it has become a part of New York’s late-season surge.

The Yankees pummeled the Red Sox 8-0 on Saturday night for their 12th consecutive victory over their American League East rivals, tying a franchise record. The Yankees — who have also now won 10 consecutive games overall since landing at the .500 mark on Sept. 8 — have taken 17 of the past 18 games between the clubs since July 28, 2019.

The Yankees’ 10-game streak overall matches their longest since June 2012. During this run, the Bronx Bombers have hit 29 home runs and have outscored opponents 85-25.

At 31-21, the Yankees clinched their 28th consecutive winning record since 1993, the second-longest stretch in MLB history behind only their own streak of 39 straight winning seasons from 1926 to 1964. The Yankees’ “magic number” to clinch a postseason berth now stands at one.

“It’s probably a little bit fluky, a little aberration,” said manager Aaron Boone when addressing the franchise’s record-tying streak vs. Boston. “Obviously, [the Red Sox] haven’t quite been the same team this year with some of the guys they’ve lost and some of the guys in their pitching staff that they’ve lost due to injury.

“And this year I know we’ve played them at some times when we’ve been playing really well. We’ve stolen a couple wins from them, like late last night. Last year, we caught them at a good time at the end of the year. Look, it’s always fun beating those guys. We obviously respect who they are and all the great games we’ve had to play against them, but … enjoy it while it lasts.”

J.A. Happ, who worked eight scoreless innings to earn his second win of the season, said the Yankees were mindful of the winning streak and hoped to set another record on Sunday when they play their last game of the season at Fenway Park.

“I know we have a good team and we’re playing well,” Happ said. “We are aware of that number [12 straight], excited to get out there tomorrow and try to take the nod [set the record] there. We recognized it tonight that we could tie it.”

“We’re focused on trying to put ourselves in a really good position for the playoffs, and winning [Sunday] would set the record — and that’s going to be a really cool thing if we do,” added outfielder Clint Frazier, who went 3-for-4 with a home run and three RBIs.

Saints’ Sanders, Thomas out against Panthers
Hat-trick of wins puts Kings XI Punjab in front in clash of equals with Sunrisers Hyderabad
Saunders to make title defense against Murray
McDonald celebrates birthday with 1st LPGA title
Hamilton showcased all his GOAT credentials in his 92nd win