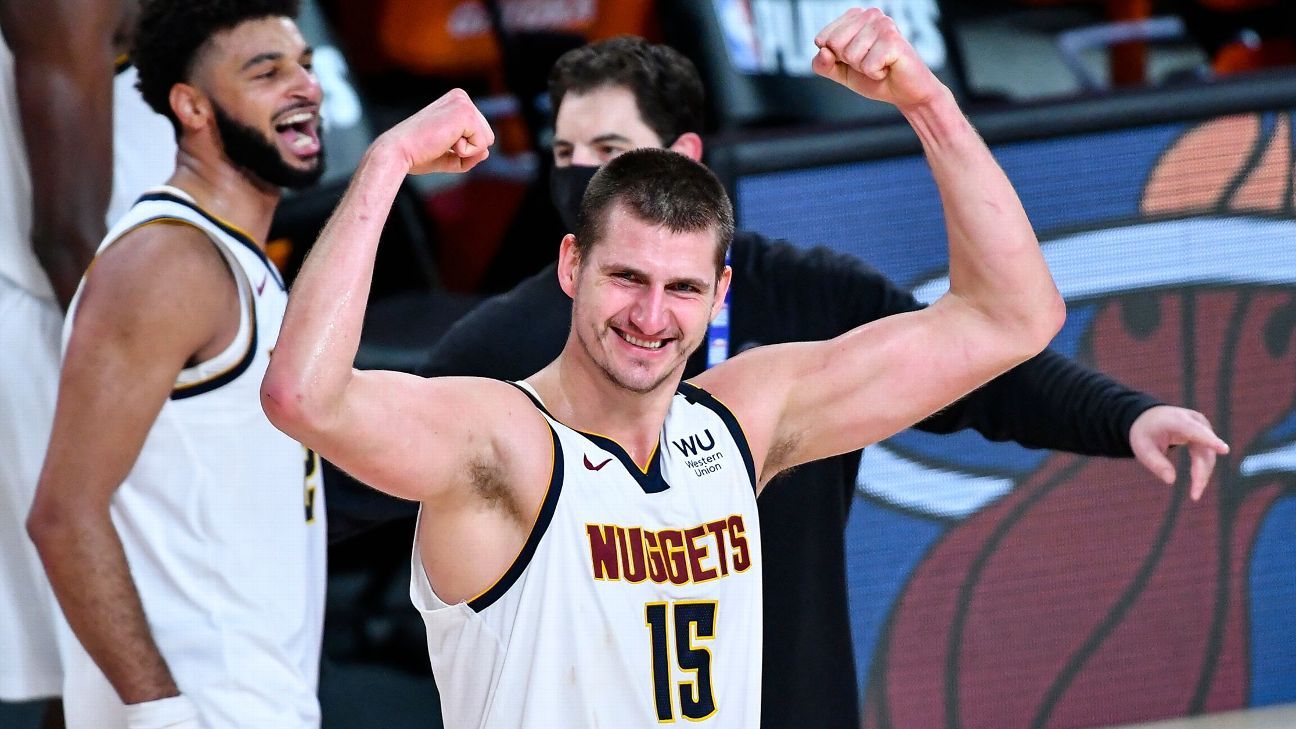 The 2020 NBA playoffs have provided many with their first extended look at the unusual game of Denver Nuggets center Nikola Jokic.

In the past week, Jokic has led the Nuggets to a startling upset of the LA Clippers, been named to his second All-NBA team and made his Western Conference finals debut. While Friday’s Game 1 against the Los Angeles Lakers turned frustrating for Jokic and the Nuggets, his skills were on display, especially during a dominant first quarter in which he posted 11 points, three rebounds and two assists before foul trouble took him off the floor.

We asked four writers to provide insight into Jokic as a unique superstar carrying an improbable contender, a second-round draft pick who defied stereotypes, a highly unorthodox shooter and perhaps the NBA’s greatest passer ever at the center position.

How a healthy, stronger Jokic has carried the Nuggets

It was 5:30 when Tim Connelly’s phone rang one June morning.

“We talk quite often, but he’s not FaceTiming me for no reason,” Connelly recalled on Thursday. “So I was concerned.”

Connelly’s instincts were right. The franchise center revealed he had tested positive for COVID-19 in his home country.

Jokic was apologetic. Connelly, though, was concerned only about Jokic’s health and the safety of the center’s loved ones.

“There was no basketball thoughts,” Connelly recalled. “There was no what’s next. … Certainly, last thing on my mind when Nikola told me that was ‘when will you be back.'”

Fortunately, Jokic was feeling good and his family was safe. The main impact was that he arrived late to the bubble. But as the Nuggets have shown in this historic postseason run, late is better than never.

In just his second postseason, Jokic has led Denver back from the brink of elimination six times in the Nuggets’ first two series. They became the first team to pull off consecutive comebacks from down 3-1 in a series, stunning the Utah Jazz and then the Clippers.

The NBA now knows what the Nuggets can do with their center at Jokic at his fighting weight. Earlier in June before he caught the coronavirus, Jokic and the Nuggets watched pictures of his new physique — Skinny Jokic — go viral while he was in Europe.

“It’s so funny,” Connelly said with a chuckle. “He’s not that much lighter … This idea like he’s ready for the runway is misplaced.

The Nuggets say that Jokic, who appeared to be well under his listed weight of 284 pounds in June, was already in great shape when the NBA season was suspended in March. But they credit Jokic for working hard during the pandemic with the help of his two older brothers and Felipe Eichenberger, Nuggets’ head strength and conditioning coach.

Against the Clippers, Jokic led all players on both teams in points, rebounds, assists and blocks, joining LeBron James and Kevin Garnett as the only players to do so in a playoff series since blocks became official in 1973-74, according to Elias Sports Bureau.

LA coach Doc Rivers said the Serbian 7-footer was “the best-passing big that I’ve seen, I think, ever” and likened Jokic’s footwork to Hakeem Olajuwon‘s.

After Jokic dismissed the Clippers with a triple-double of 16 points, 22 rebounds and 13 assists in Game 7 to punch a ticket to the West finals, the Nuggets celebrated.

Eating pizza and appetizers at an outdoor restaurant at the Gran Destino Tower, the team’s hotel, the Nuggets brought out a speaker so everyone could play music. A jubilant Jokic tried to teach the Nuggets some Serbian dance moves, locking arms with team members in a group and putting two feet in, then two feet out.

“He started playing some music and tried to teach a handful of us a couple of steps that didn’t go well,” Connelly said. “He’s a much better teacher on the court than he is on the dance floor.” — Ohm Youngmisuk

Why Jokic’s surprise success is a game-changer

Nikola Jokic’s introduction to NBA executives came at the 2014 Nike Hoop Summit in Portland. On a loaded team headlined by Karl-Anthony Towns and Jamal Murray, Jokic stole the show in practice with his court vision, crafty finishes, touch and all-around basketball instincts at 6-11 with a 7-3 wingspan. I’ll never forget the heavy-set Jokic pushing in transition, throwing one-handed outlets and somehow dropping spin finishes over the never-ending arms of Towns and Clint Capela.

But at the time, the prevailing tendency was to fit players into a box and rely on stereotypes. As an unorthodox, below-the-rim European big man, Jokic’s ceiling seemed limited, no matter what kind of skills and savvy he showed.

NBA teams and media analysts alike clearly put too much value in the times Jahlil Okafor went right through Jokic in the post during the Hoop Summit game and Jokic’s struggles containing the ball in pick-and-roll. We didn’t value his ballerina-like footwork, incredible hands and pinpoint passing highly enough.

The NBA playoffs have advanced to the conference finals at ESPN’s Wide World of Sports Complex.

So as NBA teams approached the 2014 draft, Jokic was not a player on whom they were willing to risk a first-round draft pick. Even the Nuggets’ brass will acknowledge that they passed on Jokic multiple times before selecting him with the 41st pick, and drafted him behind another skilled center, Jusuf Nurkic, whom Jokic would supplant in Denver.

Maybe if his jersey had read Duke, Kansas, Kentucky or North Carolina, we all would have felt more comfortable with how Jokic fit into the NBA. It was the Nuggets who ultimately took a leap of faith, a move that has paid major dividends as they’ve made their way to the NBA’s final four.

Jokic’s success as a playoff performer and two-time All-NBA selection has caused NBA scouts to think twice about trying to fit prospects into a rigid box of scouting parameters rather than focusing on production. In terms of helping us see players for what they can do as opposed to what they can’t, Jokic is a key player. — Mike Schmitz

Mike Schmitz is an NBA draft expert and a contributor to DraftExpress.com, a private scouting and analytics service utilized by NBA, NCAA and international teams.

The Sombor Shuffle — Jokic’s one-legged, high-arcing jumper — is the wackiest move in the league right now. In an NBA increasingly gripped by shot selection dogma, its wackiness is downright refreshing.

But don’t confuse wacky for harmless. As the Jazz and Clippers could attest, it looks weird, but it works.

Of the great NBA players, Jokic is the most unorthodox, and you can see that in his footwork on many of his offensive moves. But it’s the shuffle part of his Sombor Shuffle routine — as he gathers the ball, gets up on his right foot and tilts back to create shooting space — that is especially unusual.

The search for an exact comp is futile. Dirk Nowitzki’s famous one-legged jumper — copied by many other NBA players, Kobe Bryant and Kevin Durant among them — was more fluid and a true fadeaway because he used his left foot to push back and square up. Jokic’s signature shot is also vaguely reminiscent of the jumpers of big men Jack Sikma and Sam Perkins, but those shots were funky in their own ways.

Of course, it’s not just the one-legged shot that works for Jokic, who has been the most prolific midrange scorer in these playoffs. He leads all postseason players with 42 non-paint 2s, including several late-game daggers, and his shot chart reveals he’s been efficient in the midrange all season long.

Overall, Jokic has launched 204 jumpers in the bubble — both 2s and 3s — and posted an impressive 57.6 eFG% on them. The league average is 51.8. Only Kawhi Leonard and Jamal Murray have made more jump shots since the restart.

One NBA shooting coach told me that while the Serbian’s jump shot might not start off looking great, by the time he actually releases the ball, his form is clean, with a high release, solid elbow alignment and a very good follow-through.

Long story short, Jokic’s jumper is both wacky and reliable, and it’s a huge reason why Denver is still playing. — Kirk Goldsberry

The best passing center of all time?

A debate has broken out between ESPN color analysts Mark Jackson and Jeff Van Gundy. Van Gundy has repeatedly declared Nuggets star Nikola Jokic the best passing center of all time, with Jackson pushing back and citing past standouts — a group that features Hall of Famers Wilt Chamberlain, Bill Walton and Arvydas Sabonis.

Can we figure out whether Jokic truly is the best passing big man of all time?

Evaluating passers is challenging even with our modern tracking data, none of which exists for greats of the past. And assists have increased over the years as scorekeepers have become more generous. To account for that, let’s look at the percentage of his team’s assists a player accumulates to compare across the decades.

By that measure, Jokic blows away the competition with three of the top four seasons on record by a player listed as a center at Basketball-Reference.com.

Jokic is the only center to have more than 37% of his team’s assists, which he’s done each of the past two seasons.

The other players cited as the best passing centers don’t come close. Chamberlain famously racked up big assist numbers for two seasons, but that was partially because he averaged nearly 47 minutes per game. On a per-minute basis, he can’t touch Jokic.

Perhaps other centers playing Jokic’s role would have accumulated similar assist totals. But it’s hard to imagine even the likes of Chamberlain and Walton actually bringing the ball up as a point guard and passing off the dribble, something Jokic does frequently.

When it comes to passing from the center position, I agree with Van Gundy: Jokic is one of a kind. — Kevin Pelton