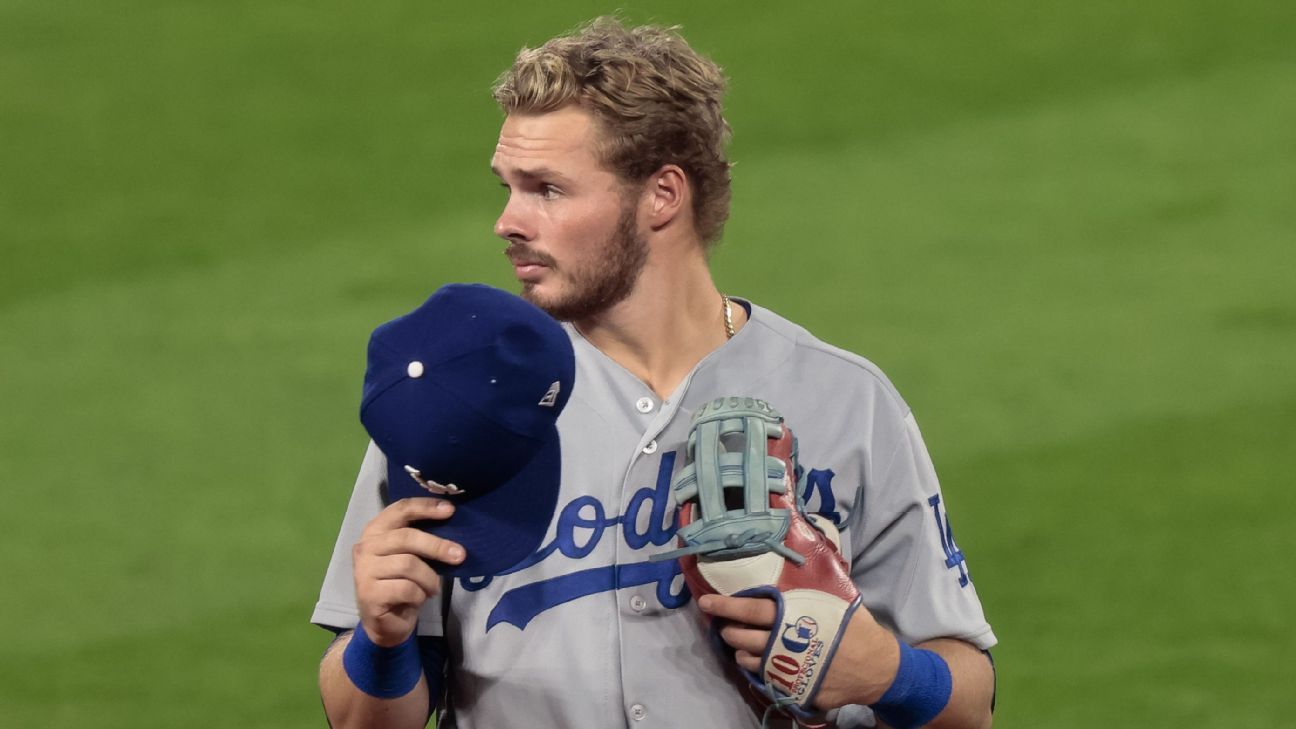 Gavin Lux is only 22 years old, still technically navigating through his rookie season. He’s trying to figure out his swing, trying to learn the pitching in major league baseball, trying to live up to the lofty expectations of being a highly rated prospect and trying to carve out a role on a Los Angeles Dodgers team that stands among the most talented in recent memory.

Lately, though, Lux has found himself consumed by his hometown of Kenosha, Wisconsin, a lakeside community of around 100,000 people that has become embroiled in the racial tension that has risen across the nation over the past four months.

Jacob Blake, a 29-year-old Black man, was shot seven times in the back by a white police officer with Blake’s three children in the car on Aug. 23, sparking several nights of protests that escalated into violence and led to the shooting death of two demonstrators.

Lux has spent a lot of these past few weeks thinking about his family and friends back home, particularly his brother-in-law, a cousin of Pro Bowl running back Melvin Gordon, and his nephew, both of whom are Black.

It helped spur him into action.

Lux has been in touch with business owners and community leaders to gather intel on the best ways to help. The details are still hazy, but he has vowed to be proactive. He wants to set up a fundraiser for the businesses that have been affected, and he wants to get back into the community as soon as the Dodgers’ postseason run is over. The hope is to put together some sort of charitable event, perhaps a softball game or a 3-on-3 basketball tournament, to raise money and help bring the community back together.

“I feel like anybody can just write a check,” Lux said, “but this is where I grew up.”

Gordon is also from Kenosha. So is Minnesota Vikings cornerback Trae Waynes and social media influencer Tristan Jass. Lux is hoping to recruit all three in an effort to slowly pick up the pieces. Before a recent game against the Colorado Rockies, Lux spoke to ESPN about the dynamics of his hometown and the challenges it faces. (This conversation was edited for brevity and clarity.)

How quickly did you realize you needed to do something?

MLB’s 60-game regular-season sprint is coming down to the wire. Catch the excitement on ESPN.

On ESPN and the ESPN App; all times ET.
Don’t have ESPN? Get instant access.

Lux: It took a couple of days just to sit and talk to some family members and some friends and some other people in the community that were affected. I was like, “Man, there’s gotta be something I could do to use my platform to be able to help.”

What were you hearing from your friends and family members about what it was like over there during that time?

Lux: It was a crazy time. A lot of different people were affected, businesswise, a lot of families were affected. They just said a lot of the city was struggling and that it was definitely just a completely different vibe from what it usually was. The community, for me, feels like it’s a tight-knit community. It’s not a super small city, but everybody kind of knows everybody, it feels like. Just to see everybody go through it a little bit, it kind of hurt me.

You’ve spent the vast majority of your life immersed in being a baseball player, and so much of your mindset has been set on what it’s going to take to get to the major leagues and stay there. Had you gotten to a point where you thought far enough ahead about how you would ultimately use your platform, or did this event trigger that for the first time?

Lux: It’s always in the back of my mind, but for it to hit so close to home, it caused a trigger where I was like, “Man, I do have a little bit of a platform, I can help. How can I help? What is the best way to help?” Those were kind of the thoughts that went through my head. Having it happen in my hometown definitely triggered it. But you see guys on our team like [Justin Turner] and [Clayton Kershaw] doing so many good things in the community, Mookie [Betts]. Pretty much everybody on our team is doing something good. Just being around those guys and seeing what they’re doing — it rubs off on me where it makes you want to help people and do good. That’s how it happens, you know?

How would you describe what it was like to grow up in Kenosha?

Lux: Everyone supports each other, and it really does feel like a tight-knit community. It’s right next to the water, you’re always going to the beach in the summer, stuff like that. I love the city. People might have the wrong [impression] about it, but it’s a really good city. And to grow up there, I feel lucky.

This can be difficult to pick up on while you’re still growing up, but did you ever consider it to be a racially divided city?

Lux: No, I don’t think so. Honestly I don’t. I don’t know if what happened triggered that. But I honestly don’t think it is. I really don’t. You see these protests and you see people doing these gatherings and stuff like that, and there’s people from all different walks of life. To say it’s racially divided — I don’t think it’s accurate at all.

Players, managers and the one major leaguer who took a knee share their experiences of race issues inside the game and out. Story »
Bryant: The exile of Bruce Maxwell »

What was Aug. 26 like for you? Your hometown NBA team [the Milwaukee Bucks] decides to boycott a playoff game, and then later that night you’re in the clubhouse in San Francisco where your teammates ultimately decide not to play against the Giants.

Lux: I support our whole team, obviously. I support equality and all that. For me it was emotional. Kenosha was affected, obviously. And if you have conversations with your teammates and other African American people, you really understand what is going on. People just have to have these conversations to understand what is going on. To hear from some of my teammates and other people — I’m all-in. I support the hell out of whatever we’re gonna do here.

Mookie has been very proactive in the fight against social injustice, and Kershaw has gone out of his way to educate himself on the topic. What have you learned about the Black Lives Matter movement while sharing a clubhouse with them?

Lux: You gotta put yourself in a guy like Mookie’s shoes and really understand what he’s saying and his real-life experiences. Not just Mookie, either. There’s a lot of other people, other family members and friends that I’ve talked to. You have to try to put yourself in their shoes and realize what’s going on and try to get an understanding. I keep saying this, but you just have to have these conversations. They might not be the most comfortable conversations ever, but to understand, you have to have them.

What have your conversations with your brother-in-law and your nephew been like in recent weeks?

Lux: Pretty emotional, actually. These are people that I really care about and love, and hearing them get emotional about it, it really hits home. It’s emotional. I want to see my nephew grow up and have the same opportunities that other people do.

UFC 254 viewers guide: Khabib gets the challenger he wants in ‘high-level’ Gaethje
England win women’s Six Nations title after France fall short
UFC real or not: McGregor vs. Poirier will be for the lightweight title?
How the Wallabies plan to get back on track in Sydney
Rishabh Pant omitted from India’s white-ball squads for Australia tour, Varun Chakravarthy included for T20Is