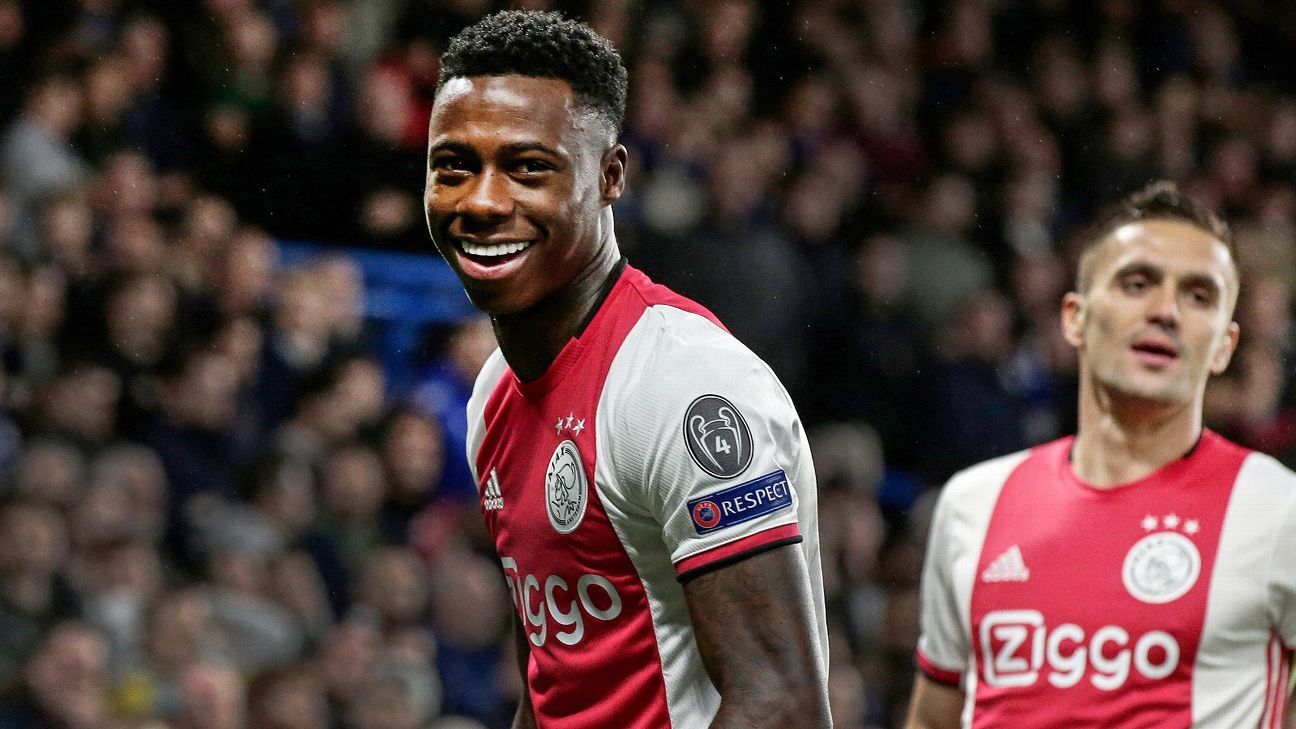 The coronavirus pandemic has made the transfer market uncertain — and you can find out when the windows open here — but here are the rumours floating around Europe’s big leagues and beyond.

With ESPN sources reporting that Arsenal are on the brink of bolstering their attacking options with the acquisition of Willian, it seems that the Gunners have quickly set their sights on another exciting forward.

According to a report in the Scottish Sun, Mikel Arteta is ready to revive his interest in Ajax’s Quincy Promes following a string of fine performances last season.

The 28-year-old Promes struck an impressive 16 goals and five assists before the Eredivisie came to a premature end in March, including one against Chelsea in a thrilling Champions League encounter that ended 4-4.

The Netherlands international only returned to his homeland from Sevilla last summer in a £14 million deal, but is believed to be keen on a switch to the Emirates, with the outlet quoting a source “close to the player.”

The report goes on to suggest Ajax would be willing to part ways with the player, who has also attracted attention from Liverpool in the past.

Juventus willing to offer three players in deal for Lacazette

Meanwhile, Juventus will make three players available to the Gunners as the Old Lady step up their pursuit of forward Alexandre Lacazette .

Earlier, the Athletic had revealed the North London club may be forced to let the France striker leave in order to raise funds, with Juventus identified as potential suitors as new boss Andrea Pirlo looks to refine his squad ahead of the new campaign.

And now the Mirror adds that Pirlo is willing to offer the Gunners their pick of trio Gonzalo Higuain, Douglas Costa or Cristian Romero in a bid to entice the club to sanction a deal.

Costa was reported as being a “non-starter” based on his wages and a lack of interest in linking up with Arteta’s side, but Tutto Mercato says that’s not the case, stating that the Gunners would be willing to agree a swap-deal, including one involving Costa.

Rumours that Manchester City legend David Silva will head to Serie A at the end of the season have been building momentum over the course of the past few days, with Lazio suspected to be the Spaniard’s next destination.

And according to a report in the Guardian, that deal is now pretty much done with Silva, 34, expected to sign a three-year-deal with the Biancocelesti when he finally leaves Manchester City.

That would make Silva 37 upon the expiry of his next contract, but the silky midfielder believes he has five more years in him at the highest level.

However, before that there is still the small matter of a Champions League campaign to complete, with Silva almost certainly determined to go out on the highest of highs ahead of a quarterfinal matchup with Lyon.

Meanwhile, Lazio are said to be close to extending the contract of star man Ciro Immobile and are in advanced talks to sign Vedat Muriqi from Fenerbahce in a £14m deal.

– Southampton are finally expected to announce the signing of Real Valladolid defender Mohammed Salisu in the coming days, the Daily Mail reports. Saints paid the 21-year-old’s £10.9m release clause last week, but the player was forced to spend 14 days in isolation prior to linking up with his new club.

– Newcastle’s takeover may be on hold, but the club are at least said to be close to their first signing of the summer. The Northern Echo reports that talks with midfielder Jeff Hendrick are at an advanced stage following the expiration of the 28-year-old’s Burnley contract.

– This one might leave Chelsea fans steaming. According to Sky Sports, West Ham have denied reports of a £50m from the Blues bid for Declan Rice and would “laugh off” any such offer. The Hammers are determined to keep hold of their star man, who is under contract until 2024 while West Ham also have an option of an extra year.

– In other news, the same outlet reports that Bayern Munich‘s Thiago Alcantara says he would “love to play for Jurgen Klopp.” In fairness, who wouldn’t? Sadly for Thiago, though, Liverpool aren’t currently on the lookout for a midfielder, but the 29-year-old will be considered should that change. Thiago has already told his current employers that he will seek a new challenge when his current contract expires next summer.