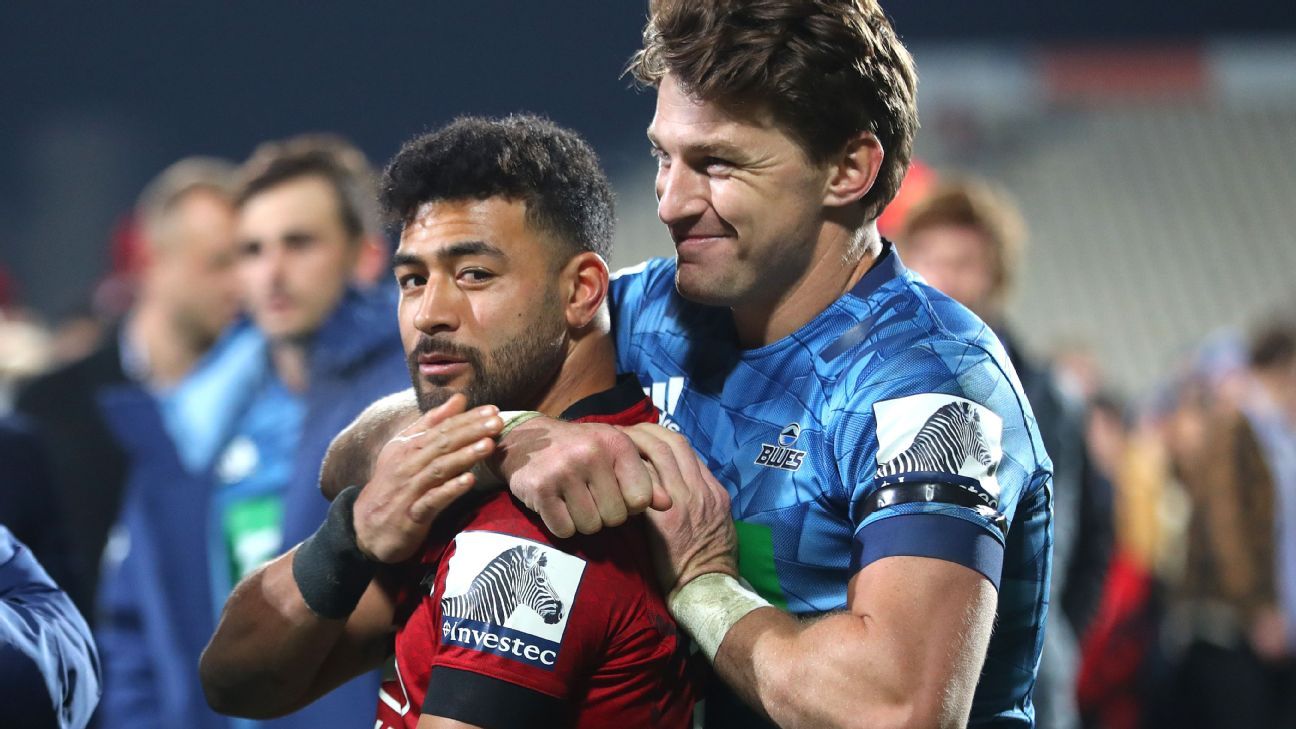 The first half of Super Rugby Aotearoa is in the books after Round 5 was completed over the weekend.

There were wins for the Crusaders and Hurricanes, with Saturday night’s match in Christchurch certainly delivering on its pre-match hype.

Catch up with some of the key talking points from the weekend’s action below.

Saturday night’s game between the Crusaders and the Blues in Christchurch was easily the standout match of the year so far, in both the seven rounds of Super Rugby and now the first round-robin cycle of Super Rugby Aotearoa.

Two high-quality teams playing physical, attractive rugby in front of a vocal home ground. What more could you ask for in the current climate?

The Crusaders and Blues are clearly the premier teams in Super Rugby Aotearoa and look set for a championship deciding clash in Auckland in five weeks’ time; though the Blues will need to have added a few bonus points before then, and hope the Crusaders fail to grab them, too.

The big question between now and then is whether Blues coach Leon MacDonald will consider bringing Beauden Barrett closer to the action, so that he may be able to assert the same influence as the man who took his All Black No. 10 jersey: Richie Mo’unga.

The two most naturally gifted players in New Zealand rugby, Mo’unga and Barrett are currently on different trajectories. While Mo’unga is producing the kind of audacious kick-offs that will make highlight reels for decades – more on that later – and throwing the passes that create tries, Barrett’s contributions have been largely confined to his left and right boot.

And the Blues fullback is still adjusting to the referees’ renewed focus on the breakdown laws, Barrett pinged by referee Paul Williams for incorrect entry; but he is hardly alone in committing that mistake either.

It’s not that Barrett isn’t getting involved, it’s just that he is not involved as much as he could be, or at least as much as Mo’unga is.

For the moment, though, it seems as though MacDonald is content with his current setup.

“Beauden was busy. I know he is pretty exhausted. He had a good influence on the game as well, he was up in the front line for a good period of that second half.

“Richie is a different type of player than Beaudy, he was pretty good tonight, wasn’t he?”

As for Mo’unga’s sensational restart, well let’s just be thankful we have the benefit of replays because the broadcast missed his moment of individual brilliance when it actually happened.

Mo’unga’s grubber drop kick, slide, regather, spin and clean break put the Crusaders immediately on the attack after Rieko Ioane’s try. While that sequence was eventually derailed, the hosts did find the stripe a short while later when the No. 10 hit George bridge with a beautiful wide pass, the winger then finding Mitchell Drummond back on the inside for a classic Crusaders five-pointer.

Mo’unga finished with 16 points to go with his moment of astonishing skill and the try assist for Drummond’s try. There is no doubt he will be the All Blacks No. 10 later this year, it’s just whether Barrett gets the chance to remind us of what he can do in the same shirt for the Blues beforehand.

Much has been expected of the Ioane brothers since they first arrived at the Blues a few years ago. Rieko has, for the most part, delivered for the franchise but he then lost his spot on the wing for the All Blacks at last year’s World Cup following some indifferent form.

Akira has had a tougher time of it over the years and long had his workrate called into question.

But there can be doubting the duo’s contribution to the franchise in Super Rugby Aotearoa, nor the fact they were the most influential players for the visitors in Christchurch on Saturday night.

Sensing the opportunity following what may have been a fortunate scrum penalty, Akira Ioane took a quick tap and powered towards the line. A couple of passes later, Rieko Ioane skipped on the outside of a defender and then powered through the cover defence to score.

Rieko looks right at home at outside centre and it may just be that last year’s Test omission becomes the turning point for his shift closer to the ball in the backline. He will certainly be front and centre in the mind of All Blacks coach Ian Foster when it comes to the midfield, adding his name to the list that already includes last year’s centre pairing Jack Goodue and Anton Lienert-Brown and Ngani Laumape and Braydon Ennor.

Akira, meanwhile, is probably better for the rise of Hoskins Sotutu, in that it has taken some of the attention off Ioane’s game and allowed him to narrow his focus on his role, not the white noise that exists in the background.

HURRICANES CAN STILL BE A FACTOR

They will need to win all four of their remaining games and pick up some bonus points along the way, but the Hurricanes are capable of figuring in the second half of the competition.

Sunday’s win over the Highlanders was by no means perfect, the match never really hitting any great heights, but their key men exerted just enough influence to suggest they are starting to settle into a groove.

TJ Perenara certainly will have enjoyed selling All Blacks rival Aaron Smith a dummy to race in and score, while Jordie Barrett’s long pass gave Kobus van Wyk enough time and space to score one of his two tries.

Ardie Savea and Ngani Laumape were also in fine form, meaning the Hurricanes’ four key All Blacks were all heavily involved – while Dane Coles had the week off.

Discipline continues to be an issue for Jason Holland’s side however after they conceded 15 penalties to the Highlanders eight at Westpac Stadium. If the Hurricanes are giving that kind of free ride up the field to either the Blues or Crusaders their unlikely charge in the second half of the season will be over before it begins.

They play the Blues and Crusaders over the next two weeks.