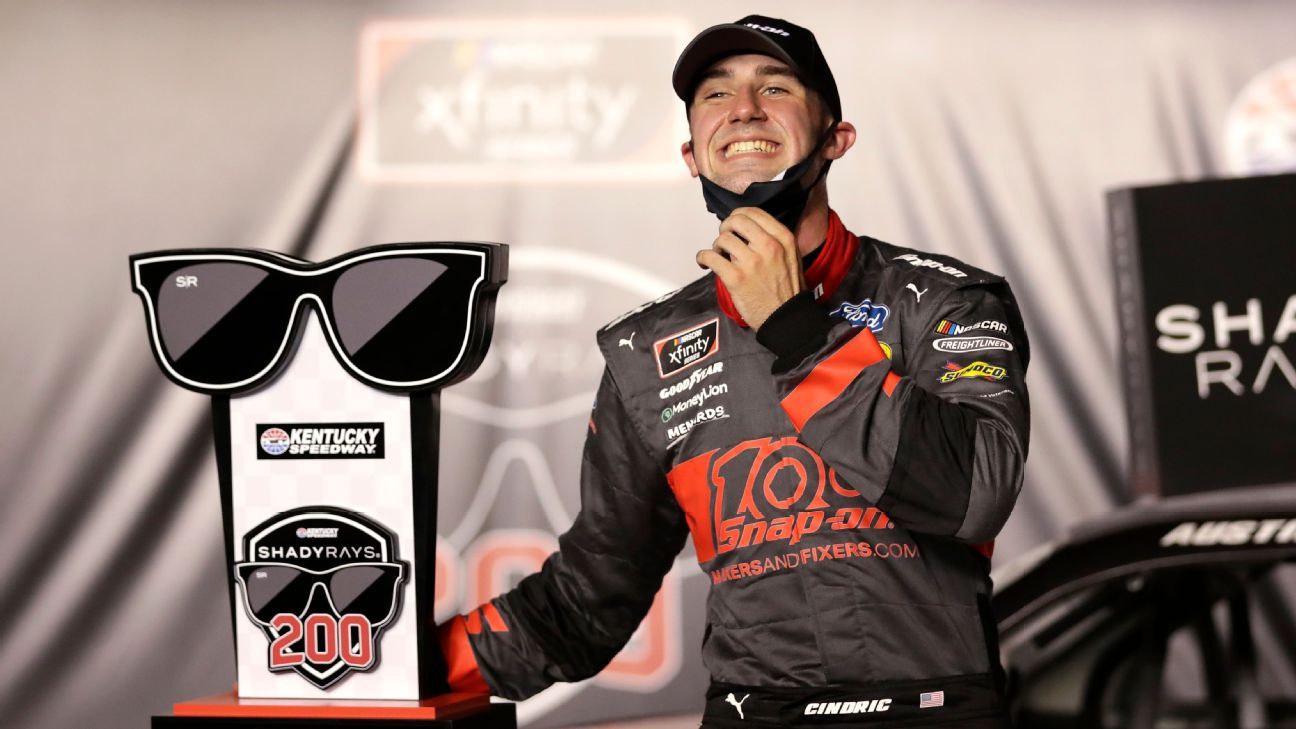 In fact, he did it so well at Kentucky Speedway that the issue now is whether an encore is possible.

Cindric won the first of two NASCAR Xfinity Series races at Kentucky this week, charging past Chase Briscoe on an overtime restart Thursday night for his first victory of the season and first of his career on an oval.

“I don’t care what shape the track is. If it’s dirt, oval — I don’t care. I’m just so happy this Ford Mustang is in Victory Lane,” Cindric said.

Cindric spent most of the first two stages chasing Noah Gragson, the pole sitter who seemed poised to dominate all three segments. Cindric then took charge on a series of restarts in Team Penske’s No. 22 Ford. On the last one, he went around Briscoe on the outside and pulled away before a scary last-lap wreck ended the race.

The accident involved Justin Allgaier, who was transported to a hospital for further evaluation.

The 21-year-old Cindric, son of Team Penske president Tim Cindric, had eight top-10s with six top-5s on ovals before breaking through on the 1.5-mile Kentucky layout. His only other series victories came last year on road courses at Watkins Glen and Mid-Ohio.

“We’ve come so close all year,” said Cindric, who led twice for 41 laps. “These guys have given me so many awesome race-winning cars. … This is awesome. I’d love to be able to come back into another performance like that tomorrow night, but all the credit to my guys for getting me here.”

The race ended up going 204 miles. A 300-miler is set for Friday night in the series’ first doubleheader at Kentucky.

Rookie Riley Herbst was second in a Toyota, followed by Ross Chastain in a Chevy, Briscoe in a Ford and Michael Annett in a Chevy.

“We over-adjusted the car there at the end and got too tight,” Herbst said. “All in all, we’ve had speed all year; we just haven’t been able to capitalize, mostly on my part, in these final stages of the races. Once we start capitalizing, we’ll start getting good finishes like this. This was a good one.”

Gragson dominated the first two 30-lap stages, a first for the driver who turns 22 on Wednesday, but faded to finish 11th.

Briscoe entered the race red hot with consecutive victories at Pocono and Indianapolis and three in his past four starts. He started seventh and eventually drew Gragson in his sights by Lap 50.

He was in the hunt late and appeared in good position for a three-peat before a wiggle allowed Cindric to get the edge.

“I just got loose,” Briscoe said. “I thought I was gonna be able to clear him and I just got too loose and about wrecked the thing, and then I don’t know if I just made the right-rear [tire] mad or what — I was literally wrecking both ends after that.”