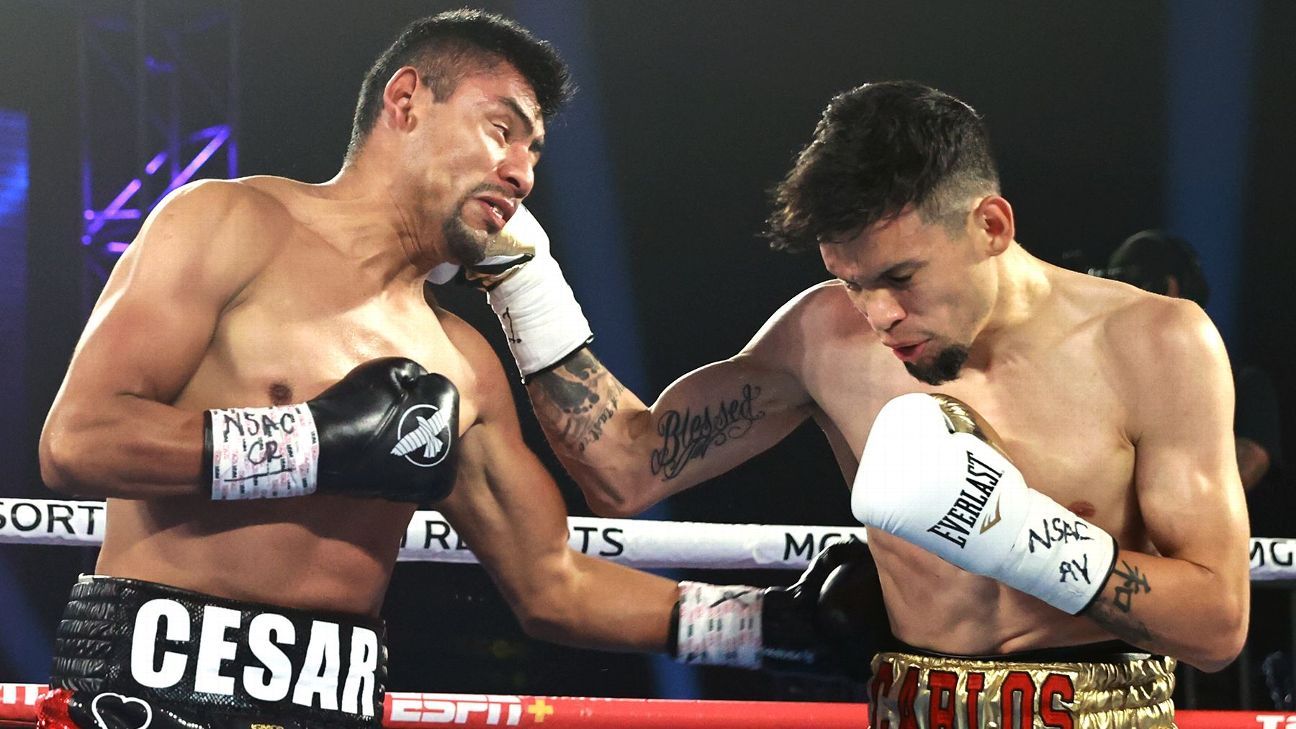 Junior featherweight contender Carlos Castro dispatched the normally durable Cesar Juarez with an impressive fourth-round TKO victory in the co-main event on the Carlos Takam-Jerry Forrest undercard inside the Top Rank” bubble” at the MGM Grand Conference Center in Las Vegas on Thursday. From the very beginning Castro was simply too sharp and precise for Juarez, whose corner called off the bout after a lopsided fourth round.

While Castro (26-0, 11 KOs) lacks elite power, he is a true technician with a solid foundation. He was very assertive in stepping right towards Juarez (25-9, 19 KOs) and Castro didn’t hesitate to work inside, where he threw a plethora of left hooks and right hands to the body. Juarez, who lost his two world title opportunities against Nonito Donaire and Isaac Dogboe in the past, was visibly affected by the constant two-handed attack of Castro. If there was a punch that could be thrown, Castro threw it hard, and with great accuracy.

The fight started to become one-sided in the fourth round as Castro landed 41 power punches. Juarez was starting to fold and he was beginning to wane physically from the constant attack. As Juarez trudged back to his corner after the bell had sounded, his corner alerted referee Celestino Ruiz that they were throwing in the towel. It was a timely stoppage.

Castro, who is rated as high as number two at junior featherweight, by the WBC, showed that he’s ready for a title shot at 122, sooner rather than later.

Joshafat Ortiz put forth a solid display of boxing to outpoint Joshua Orta in a six-round majority decision victory. Ortiz got off to a quick start and was in control in the early stages before getting tired in the later rounds. He did enough in those early rounds to come out on top by scores of 58-56 (twice) and 57-57.

Ortiz (8-0, 4 KOs) had significant advantages in height and reach, and he used them to box effectively on the outside, throwing long left jabs and keeping the shorter Orta (6-1, 2 KOs) away, preventing him from landing many significant punches. When Ortiz did step inside, Orta was oftentimes outhustled and beaten to the punch.

As Ortiz fatigued in the second half of the fight, Orta started to land a few right hands. An accidental clash of heads in the fifth round caused a cut near Ortiz’s right eye. While Ortiz didn’t finish with a flourish, he had done more than enough in the early rounds to get the victory.

Stubbs scores win in return to “the bubble”

Donte Stubbs scored two knockdowns of Fred Wilson Jr. to win a clear unanimous decision by judges’ scores of 58-54, 58-53, 58-53. For Stubbs, this was a solid bounce-back win after suffering his first professional defeat nine days ago against Isiah Jones at the same venue.

Despite giving up five inches in height, the 5-foot-10 Stubbs (7-1, 2 KOs) was able to get inside on the 6-foot-3 Wilson. Stubbs used his advantage in strength to control things, and while he did his best to work inside, he had to fight through the grappling and clutching of Wilson (6-1-2, 2 KOs). An overhand right in the third round sent Wilson to the canvas, and from that point on, Stubbs began to dominate the fight.

Near the end of the fifth frame, another sweeping overhand right sent Wilson to the floor for the second time in a fight, and by the end of the fight it was evident that Stubbs was clearly the better boxer inside the ring.