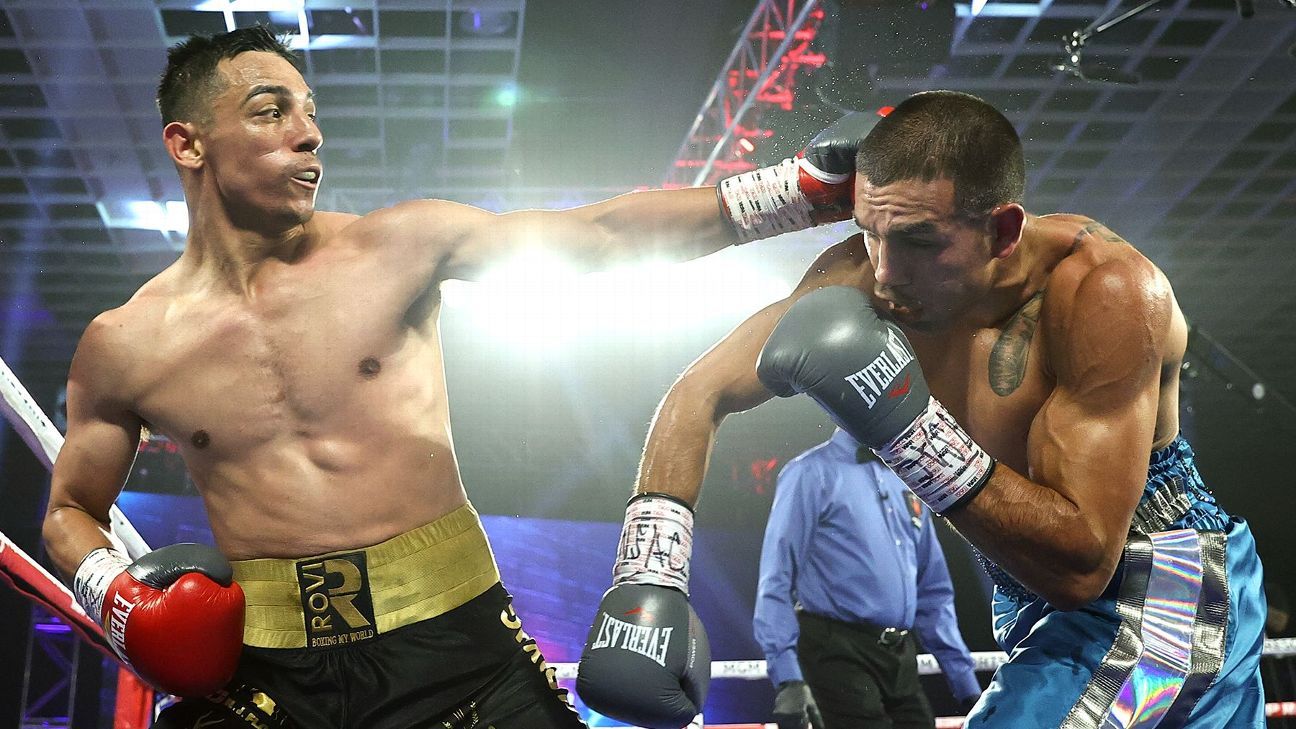 Luis Alberto Lopez upset Andy Vences in a close, hard-fought, 10-round battle Tuesday night at the MGM Grand Conference Center in Las Vegas. After hurting Vences badly in the sixth round, Lopez was in full control — but Vences gathered himself and fought back in the final few rounds to make it close.

Lopez is an awkward and gangly fighter who troubled Vences (23-2-1, 12 KOs) with his quick punches. Vences had problems seeing those punches coming in early on. As Vences laid back and attempted to counter, he was consistently beaten to the punch by Lopez. When Vences initiated the action, he had more success — by utilizing his jab and right cross.

The fight had a big momentum shift in the sixth as Lopez struck Vences with a right uppercut. That punch not only hurt Vences, but had him staggering around the ring for the rest of the round. Lopez landed numerous follow-up punches but could not finish the job.

Vences was eventually able to recover, and in the final few rounds, he took a more aggressive approach and began to push Lopez back by being first with his punches. Vences landed his share of right hands, but Lopez never wavered. This was a rough fight with battle scars, as both boxers suffered cuts from headbutts. When it came down to the scorecards, Lopez took the decision by the thinnest of margins.

“I felt I won the fight with my pressure,” said Lopez after the bout. “It was a close fight, but I was confident I did enough after the final bell sounded. Credit to Vences. I thought he was knocked out earlier in the fight, but he came back like a warrior.”

For Vences, it was a tough pill to swallow, as he thought he had done enough to come back from a rough sixth round.

“I felt I edged it,” said Vences, who was also defeated by Albert Bell via decision last summer. “I thought I won a close fight, but I am not going to complain about the decision. It was a good, close fight. No excuses. I prepared well for 10 hard rounds.

After the sixth round, Vences said he recovered well and deserved the victory.

“I listened to my corner and got back in the fight,” said Vences. “I thought I closed strong and did enough to win. I’ll come back to fight another day. This isn’t the end for ‘El Tiburon.'”

According to ESPN reporter Bernardo Osuna, Vences needed 12 stitches to close a cut over his left eye and two stitches to seal a smaller cut on his forehead after the fight. Vences also said he will take some time off before deciding about his next move.

Cortes gets off the canvas to win decision

Andres Cortes kept his unblemished record intact by getting off the canvas and defeating Alejandro Salinas, earning a decision victory over eight rounds in a very competitive back-and-forth bout. Cortes was knocked down in the fourth but gathered himself and took over the fight down the stretch to win by scores of 76-75, 79-73 and 77-74.

Top Rank Boxing is on ESPN and ESPN+. Subscribe to ESPN+ to get exclusive boxing events, weigh-ins and more.

Salinas (10-4, 9 KOs) started the fight pushing the action, throwing hard right hands and backing up Cortes (13-0, 7 KOs), who seemed to be very comfortable fighting off the ropes throughout this bout. Salinas kept up a strong pace in the early rounds, throwing each punch with great vigor. A clash of heads cut Cortes near the corner of his left eye early on, but Cortes kept his composure.

In the fourth round, Salinas looked like he might seize control of this fight after the knockdown of Cortes with a short, compact right hand, and it was his fight to lose. But Cortes showed great poise by evading the rushes of Salinas and use his counter-punching well. As time went on, Salinas slowed down, while Cortes steadily won the late rounds, subtly making it his fight along the way.

Bantamweight Gabriel Muratalla remained undefeated by dominating the rugged Sergio Lopez in four fast-paced rounds. At the end of the bout, Lopez came out on top by scores of 39-37, 40-36 and 40-36.

Muratalla (4-0, 3 KOs) was making a quick turnaround, as he scored a first-round stoppage of Fernando Robles on June 11. While the scores looked wide, this was a hard-fought contest in which Lopez (4-6-3) came out aggressively and looked to crowd Muratalla on the inside. In the first round, it looked as though Muratalla was uncomfortable as he was made to work in close quarters by Lopez, who had never been stopped in his pro career.

But as the next three rounds unfolded, Muratalla — who has a full-time job as a preschool teacher — became more and more comfortable fighting at close range with Lopez, throwing fast, striking combinations, and then pivoting out of danger. Muratalla landed right hands over the top and left hooks downstairs with regularity. To Lopez’s credit he was never really hurt, but Muratalla asserted more and more control of this bout as it progressed.

It was a valuable experience for Muratalla, who went past the opening round for the first time in his career.