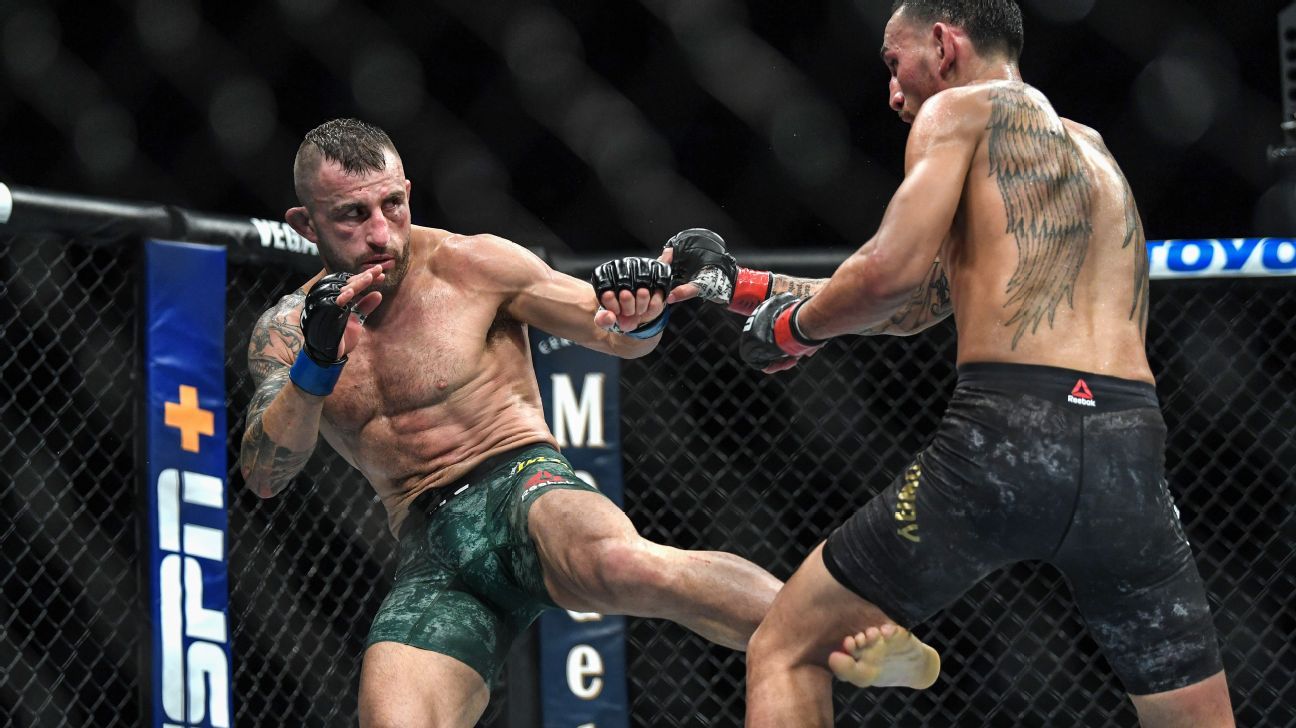 JEREMY STEPHENS LANDED his first kick to Gilbert Melendez‘s left leg 22 seconds into their fight on Sept. 9, 2017. By the two-minute mark, Stephens had smashed Melendez’s leg with four kicks, and the limb was beginning to swell.

Melendez started hopping around and limping after the sixth leg kick at 3:19 of the first round. The hematoma growing just below his knee had bulged grotesquely, to roughly the size of a baseball.

“It really does look like a small animal is trapped under his skin,” analyst Joe Rogan said on the UFC 215 broadcast.

The UFC will kick off its four “Fight Island” events with UFC 251, which is scheduled to feature three championship bouts. In the main event, Kamaru Usman will defend his welterweight title against Jorge Masvidal. Also, Alexander Volkanovski will put up his featherweight crown against former champ Max Holloway, and Petr Yan will face Jose Aldo for the vacant bantamweight belt.

Stephens landed a career-high 32 leg kicks in a vicious unanimous-decision victory. Most of those kicks were not traditional Muay Thai roundhouses to the thigh. Stephens’ main target was the calf as he utilized a technique that was not common in mixed martial arts at the time.

“That’s when it started getting used more,” Volkanovski told ESPN recently. “He used it well, and obviously it did a lot of damage to Gilbert Melendez. So people took note on it then. They knew it was a legit technique.”

On Dec. 14, 2019, in UFC 245, Volkanovski rode the low calf kick to the featherweight title. His 75 landed leg kicks in the unanimous-decision win over Max Holloway were the second most in a UFC fight and the most by a male. The two will rematch for the belt Saturday at UFC 251 in Abu Dhabi, United Arab Emirates, and the leg kicks will be a major storyline

Used prodigiously by UFC champions Volkanovski, Justin Gaethje and Amanda Nunes, the calf kick has become the hottest move in MMA. In May, Gaethje said on Rogan’s podcast that the technique will be the key to his lightweight title unification fight against undefeated Khabib Nurmagomedov later this year.

“I’m never kicking above the knee anymore,” Gaethje said. “Only below. … I’ve gotta touch Khabib there four times, and then he’s compromised.”

Volkanovski believes he has the calf kick mastered. He said it was “very important” to his win over Holloway seven months ago and could factor greatly into the rematch.

“Most people, their purpose behind the calf kicks are purely just to do damage and hurt the calf,” Volkanovski said. “Obviously, I want to damage the calf.

“[But] if someone really wants to move their leg out of the way or check it or make you miss, again, you’re breaking their rhythm. That’s a big movement just for you not to land. I’m still making them fight my fight. They can check it all they want. See what else comes after that. I’m breaking your rhythm just by you worrying.”

For the record, Holloway isn’t convinced the leg kicks decided their first bout and doesn’t sound too worried they’ll play a significant role in the rematch.

“If Jose Aldo kicked me 20 times, I don’t know what would come first, the cure for coronavirus or me being able to walk,” Holloway said. “This guy kicked me [nearly] 80 times, and I had an after-party I had to go to, and I was dancing the night away.

NO ONE IS sure who was the first to implement or popularize calf kicks in mixed martial arts. Benson Henderson is considered one of the first to use it as a significant part of his offense at the highest level during his run as WEC and then UFC lightweight champion in the early 2010s.

It’s not a traditional Muay Thai technique — some old-school striking coaches say they don’t teach it — though it came to MMA through Muay Thai instructors.

There’s a consensus around two points regarding the calf kick: It’s extremely effective, and it’s a vital part of the sport in 2020.

Gaethje described the impact of the kick as “devastating.”

“We’ve seen it so many times in the room,” Fortis MMA head coach Sayif Saud said. “A guy gets hit with a good calf kick, that’s it, man. He’s not gonna be able to move around. Some guys stay like that for a few days.

At UFC 249 on May 9, Henry Cejudo landed 23 leg kicks in a TKO win over Dominick Cruz to retain the bantamweight title. Over the past six weeks, there were two leg-kick TKOs in the span of eight days, by Alex Perez and Chris Gutierrez. Prior to that, there had been only 10 leg-kick TKOs in UFC history, two of them earned by leg kicker extraordinaire Edson Barboza.

Among the things fighters like best about the low calf kick: It can be landed at multiple distances, and the kicking leg doesn’t have as far to travel. The calf can be right there for the taking, especially if an opponent is not familiar with defending it.

“That calf is a little bit closer and easier to touch rather than anywhere else on the body,” Volkanovski said. “It’s pretty much an easy target sometimes.”

“In the NFL, they’ll call a certain set of plays or a certain offense will work real good,” Crouch said. “Then, the next year, everybody is doing it. That’s how it is at the highest level of sport. If something is effective, everyone is going to copycat that.”

KATEL KUBIS, ONE of American Top Team’s lead striking coaches, believes he was one of the first coaches to teach low calf kicks in MMA. Kubis said he learned it in Brazil from his mentor, Fabio Noguchi, who used it during his Muay Thai career in the 1990s, and then Kubis brought it to the United States as a coach in 2009. Kubis said American Top Team fighters didn’t trust the technique until 2012, when longtime ATT athlete Wilson Gouveia landed 17 calf kicks to beat Dwayne Lewis at a Maximum Fighting Championship event.

The calf kick leads to the finish!

“After that fight, all the other fighters started asking me about the calf kick,” Kubis said.

The calf kick has become part of American Top Team’s “brand,” Kubis said. Thiago Santos used it to great effect in a loss to Jon Jones at UFC 239 on July 6, 2019. Jones came to the postfight news conference in a wheelchair. Junior dos Santos had early success with the technique in a heavyweight title fight against Stipe Miocic in 2017.

“If you kick below the knee, close to the ankle, it’s very hard to check,” Kubis said. “[The opponent is] gonna lose their balance. It’s very hard to defend and it hurts pretty bad. You can do that kind of technique with any kind of size opponent.”

Then there’s Nunes, the women’s featherweight and bantamweight champion. Kubis said her kicking game is on another level, even at a gym that boasts standouts like Jorge Masvidal and Dustin Poirier.

“I used to say she has the heaviest kick in the whole gym,” Kubis said. “Beside her, you have Junior dos Santos. Because he’s a heavyweight, it’s hard to compare. But if Junior dos Santos isn’t training, Amanda is kicking harder than him.”

Nunes successfully defended her featherweight title against Felicia Spencer at UFC 250 on June 6. On the prelims of that card, Perez, using calf kicks, stopped Jussier Formiga via leg-kick TKO in the first round. Formiga is an American Top Team fighter, and Kubis was in his corner.

Two days later, Kubis was back at the Coconut Creek, Florida, gym, telling his fighters that the future is now learning how to defend and counter the calf kick. The technique has grown far beyond the American Top Team walls.

“Now it’s time to work the defense,” Kubis told his fighters. “You guys didn’t trust the offense before. Now you trust and believe in the offense. Now the next step is you guys have to learn how to defend. Because the other teams, the other fighters are gonna use the technique against us.”

Hey All. Everyone is asking about Gilbert’s leg. Here is a pic today. He is doing A ok. Thank you to all for the support. We feel the love pic.twitter.com/VQpNj7JlTO

Stephens, who learned the kick from Muay Thai coach Jhanex Alviz, said there are three ways to defend the technique: blocking — or checking — it by turning your knee and shin toward the kick; evading the kick; or countering with an old-fashioned haymaker.

“If you get a good check on one of those calf kicks, most likely they’re not gonna be throwing it again anytime soon,” said Fight Ready striking coach Eddie Cha.

While several coaches and fighters feel the kick to the calf is safer for the kicker than kicking the thigh, Muay Thai coach Bob Perez of Houston’s Main Street Boxing is skeptical.

“I don’t teach the calf kick,” said Perez, who coaches UFC fighters Derrick Lewis and Lauren Murphy. “I don’t like the calf kick. It’s an effective kick — it freaking hurts. But it’s actually pretty dangerous to the kicker himself, as well. I think that’s what people forget. You’ll snap your s— if you throw it incorrectly.”

Dr. John Neidecker, a leading ringside physician, said the calf kick is “risk versus reward.” It’s effective for the same reason it could be detrimental.

“The low leg kick has the potential for more damage, because there is less soft tissue to absorb the blow,” Neidecker said. “However, there is more risk to the striker in injuring himself or herself for the same reason.”

STEPHENS SAID WHEN he sat down and watched the next UFC card after his performance against Melendez, he saw several fighters using the low calf kick. Alviz, Stephens said, joked that “they’re taking your move.”

“It is what it is,” Stephens said. “But I feel like they saw the effectiveness of the calf kick. Gilbert was wanting to quit in the second round.”

Volkanovski took some inspiration from Stephens’ UFC 215 victory. But he said he has modified and perfected the technique. Volkanovski said he uses the low calf kick for different means — not just to inflict pain. It can be almost like a version of a jab, just with his leg.

“If someone thinks they’re going to check a kick and it’s going to be that easy, it’s going to be a long night,” Volkanovski said. “They might not have a sore calf, but they’ll be sore everywhere else.”

That’s how rapidly fighters can adapt in a sport that’s less than 30 years old. Tactics can be seen and absorbed, then months later can be altered, mastered and used at the highest level to win or retain UFC titles. The low calf kick is just the latest example.

“That’s the cool thing about MMA in 2020,” Gibson said. “There were different styles of martial arts 100 years ago where nothing is really proven and everything is under this cloak of secrecy. Now, we get to see live tests of what works and what doesn’t and watch the game evolve.”

Jets coach: Tkachuk hit on Scheifele ‘disgusting’
Adebayo: Feels good to be back in Heat lineup
Cheeseman beats Eggington in Hearn’s back garden
Uh, yeah, the Raptors really can win the title again
Tszyu: Unlike Horn, I’m no one-fight-wonder