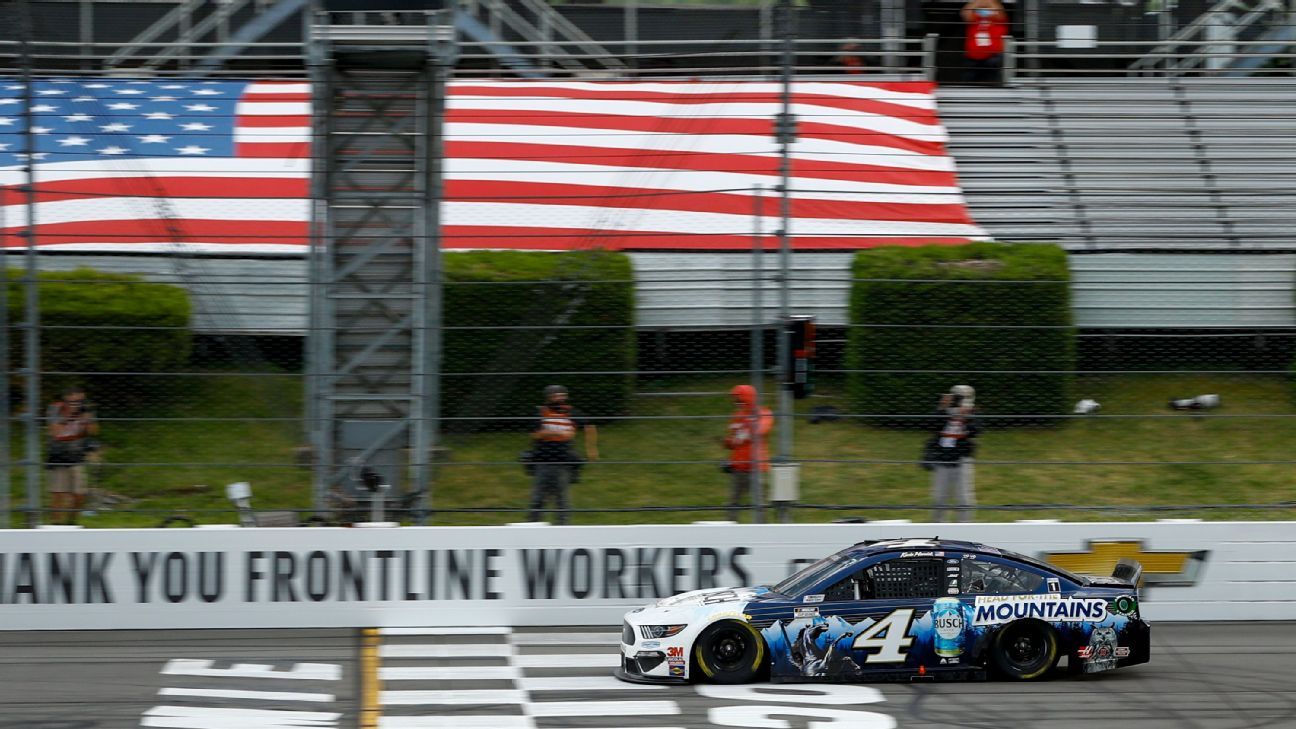 LONG POND, Pa. — Kevin Harvick snapped an 0-for-38 drought at Pocono Raceway, taking the checkered flag Saturday on one of three tracks where victory had eluded him.

Harvick won the first of two NASCAR Cup races in front of no fans this weekend at Pocono and will start 20th on Sunday with the field set by inverting the lead-lap finishers.

The 44-year-old California driver has won at every active track except Kentucky Speedway (nine tries) and the Roval, a mixture of the oval track and the infield road course at Charlotte Motor Speedway. While winless in two races on the Roval, Harvick has won on the oval at Charlotte.

Harvick, the 2014 series champion, has three wins overall for Stewart-Haas Racing this season.

Harvick held off a hard-charging Denny Hamlin for his 52nd career Cup victory. He had 12 top-5 finishes in his other 38 starts at Pocono.

He held off on the celebratory burnout — Harvick needs the same car for Sunday’s race.

Ryan Preece finished 20th and will start on the pole Sunday.

The race was scheduled as the second Saturday event, but rain washed out the Truck Series race. That sets up a small slice of history Sunday: Truck, second-tier Xfinity and Cup will all run Sunday. It’s the first time three NASCAR National Series races will race on the same day at the same track.

NASCAR wanted the trip to Pocono to settle one of the most tumultuous weeks in its history after a noose found in Bubba Wallace‘s stall last week at Talladega led to a federal investigation. The incident was not ruled a hate crime. NASCAR president Steve Phelps stated “the noose was real,” though it remains unknown who tied it. Wallace, who sparked NASCAR to ban the Confederate flag, has become NASCAR’s advocate for social change and acknowledged his time in the national spotlight left him “wore the hell out.” He finished 22nd in the No. 43 Chevrolet.

The weekend should have been one of the wildest ones in Pocono history. Track officials were optimistic the infield would be jam packed with race fans who wanted to experience four NASCAR races in two days.

“The infield would have been a sight to be seen, one that probably hasn’t been seen on the NASCAR circuit in decades,” Pocono CEO Nick Igdalsky said. “We just couldn’t see it this year. Hopefully, next year we get the opportunity to really show what we can put out here.”

Brad Keselowski, who raced to his lone Pocono win in 2011, tweeted a love letter of sorts tied to his memories of the track that date to his childhood when he tagged along to watch his father, Bob, compete in ARCA races.

“Perhaps that brings out the saddest emotion, not having fans this year at Pocono for our races.,” Keselowski tweeted. “The energy and enthusiasm here from the infield crowd has a realness to it unlike other tracks. In Pocono, the community makes NASCAR feel truly loved, we miss you race fans.”

There was a new look all around the 2½-mile tri-oval.

The track cloaked its leaderboard in advertisements because the pandemic wreaked havoc on plans to upgrade to a modern LED scoring tower. Pocono also had 1,250 fans virtually sign the start/finish line. Staff members hand wrote each name on the start/finish line ahead of race weekend. The 1,250 number matched the scheduled number of miles to be run this weekend. Pocono even sold on its website a race weekend T-shirt with “Quarantined” stamped over the logo.

Talladega Superspeedway was allowed up to 5,000 fans in attendance for its race weekend, and only 1,000 fans mostly military members and their guests, were allowed two weeks ago at Homestead-Miami Speedway.

Pocono sits in Monroe County, which is under Pennsylvania’s green designation. The green phase limits public gatherings to 250 people. But Gov. Tom Wolf’s guidance to professional sports mandates no spectators, even in green.

“I wish you were here,” Harvick said to the fans watching at home. “This wasn’t nearly as exciting.”