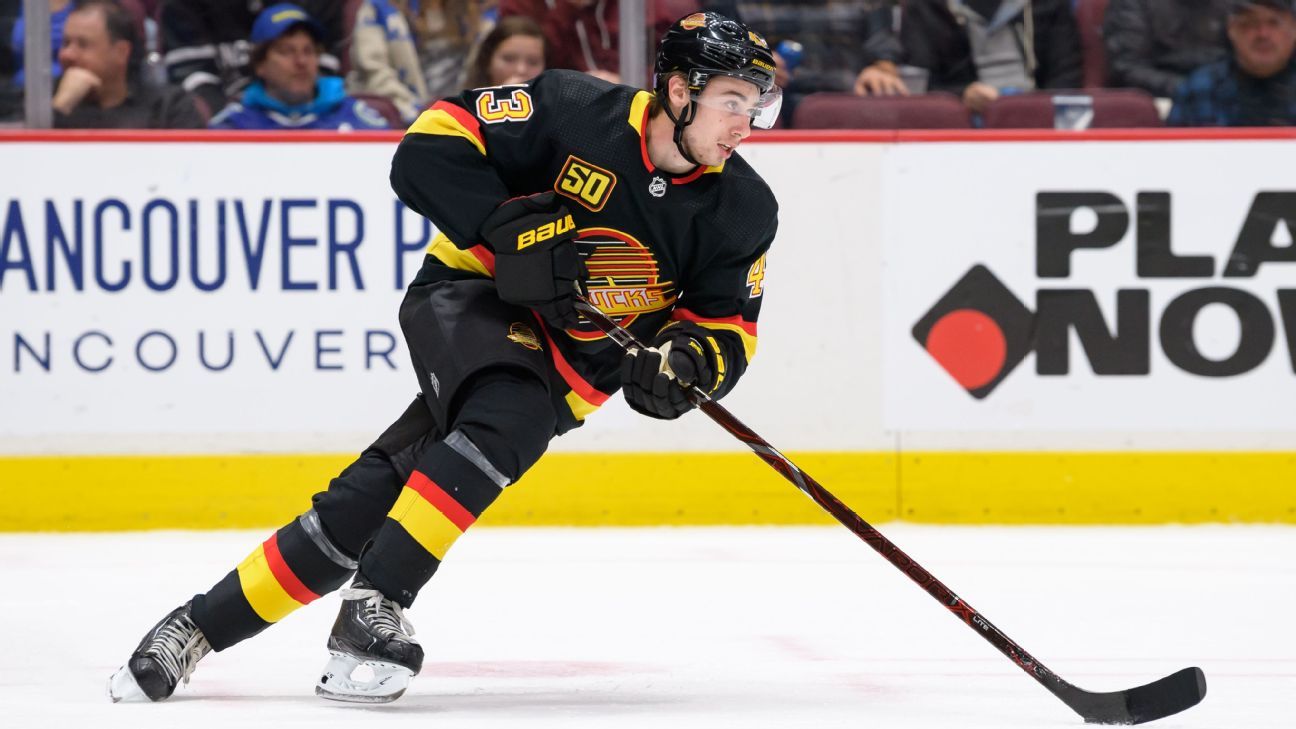 This NHL season provided one of the more compelling, back-and-forth rookie races I can remember — and between two defensemen, no less. Quinn Hughes and Cale Makar were the first two defensemen in the modern era to finish first and second in the rookie scoring race. They each walked directly into the NHL from the NCAA, getting a taste at the end of last season, and became immediate top-pairing-caliber blueliners.

The margin between the two of these players is razor thin. Makar is very deserving of consideration and will likely pick up his share of first-place Calder Trophy votes. But when it is this close, I look at which of the two players was most valuable to his team. Again, the margin in that category is so thin, but Hughes gets the nod.

Let’s take a deeper look at the Hughes vs. Makar battle — and why I lean toward Hughes — before ranking the top 10 rookies of the season.

The Canucks’ run of exceptional rookies extends to three years now, and like Brock Boeser and Elias Pettersson before him, Hughes has injected a certain level of optimism in the Vancouver fanbase and a level of excitement to just about every game he plays.

According to Elias Sports Bureau, Hughes is just the third defenseman in the past 80 seasons to lead all rookies in scoring. The other two are Hall of Famers Brian Leetch and Bobby Orr. Only 14 rookie defensemen in NHL history had more points than Hughes’s 53 — which were the most by a rookie blueliner since Nicklas Lidstrom had 60 points in 1991-92 — despite the Canucks still having 13 games to play when the season was suspended.

It’s elite company, but it’s about more than just point totals for Hughes. After all, Makar actually scored at a higher per-game rate this season and was second on the Avalanche in scoring. The numbers, from counting stats to underlying analytics, are super tight for both of these players. But while it might be a little unfair to dock Makar for playing on a superior roster, Hughes’ ability to drive his team offensively and to make it so much better when he was on the ice in terms of puck possession and scoring is one of the separating factors.

You take either player away from their teams and those clubs are worse for it, but take Hughes away from the Canucks and it could be devastating. He averaged the second-most ice time on the team, was huge on the power play with 25 man-advantage points, posted a Corsi For relative 6.4% at 5-on-5, provided an relative expected goals percentage of 7.3% and a relative goals-for percentage of 4.4%.

Hughes was a high-end prospect, but I would argue that the way he played in his first full NHL season is at a level even higher than he ever showed in two years at the University of Michigan, where he spent his draft and draft-plus-one seasons. He thrives alongside elite players and has been allowed to play his game without fear. He takes risks, but he also makes high-level decisions, and his elite skating makes him unpredictable and dangerous in all zones. As a result, he became one of the more entertaining defensemen to watch this season, and he’ll get my vote for the Calder Trophy.

With a raw point total that we have not seen among blueliners since Lidstrom’s rookie campaign, Hughes has made a strong case that he was the top rookie this year. In my eyes, he was the best of the best.

Makar was my preseason pick to win the Calder, and he delivered in every way you could have asked. His 0.88 points per game is tied with Al MacInnis for fourth all time for a rookie defenseman and trails only Mark Howe, Leetch and Larry Murphy — all of whom are Hockey Hall of Famers.

Fox did not play the minutes that Hughes and Makar did, but his impact was remarkably positive for the Rangers. He led all rookies with a plus-23 even-strength goal differential when he was on the ice, and the Rangers controlled the puck at even strength at a rate more than 7% higher with Fox on the ice. His ability to break up passes and play cerebrally in the defensive zone were notable traits and provided visual evidence to his rookie-leading 57 takeaways.

Fox has plenty of risk in his game, but he managed it remarkably well and made the Rangers a better team when he was out there.

The leader among all rookies in goals scored, Kubalik really took off as the season progressed. As his ice time grew, the pucks started going in for him at an especially alarming rate. He was the only rookie to reach the 30-goal plateau and led all first-year players by 10 tallies. He did that despite averaging just 14:22 per night, a number that is weighted by lighter usage at the beginning of the season. Kubalik also led all rookies with 38 points at even strength, with 26 of his 30 goals coming there.

Marino led all rookies in shifts per game with 26.7, and he was one of four rookies to average over 20 minutes per game. In fact, he was third among Penguins defensemen in average time on ice and played on the penalty kill. Despite missing some time due to injury, the former Harvard standout was an especially reliable member of Pittsburgh’s blue line at both ends of the ice when healthy. Marino had 26 points and was relied on in tough matchups defensively.

Of the rookie forwards, none were close to playing the top-line minutes Olofsson got with an average of 18:23 per game. He turned that into the second-highest point total among rookie forwards in the NHL and finished third on the Sabres with 42. Olofsson has an incredible shot and was especially solid on the power play, with 11 of his 20 goals coming on the advantage. He’s a valuable winger for the future of a Buffalo team that still needs to find consistent offensive footing in the NHL.

Suzuki may have cost the Habs Max Pacioretty, but what a great return for the future of the franchise. With 41 points, Suzuki finished sixth in scoring among all rookies while playing middle-six minutes for Montreal. He also fit right in on the team’s power play, putting up 14 points on the advantage.

The Hurricanes get very balanced scoring, which means scoring depth is hugely important to them. With 36 points, Necas finished fifth on the team and seventh among NHL rookies despite playing less than 15 minutes per game. This was a really good development season for Necas, who could very well break out next season in a fashion similar to the way Andrei Svechnikov did this season. The tools are all there for him to become a bigger impact player.

As one of only three rookies to score 20 or more goals, Gurianov might have been the most unlikely to do so. He really struggled to gain his footing in the AHL but built up his game, and this season, he became a reliable source of offense for the Stars. With Dallas being another team that benefits from spread-out scoring, Gurianov’s 20 goals led the Stars despite the fact that he saw the ice under 13 minutes per game.

With more games played, Merzlikins would be higher, but there’s no taking away the season he just had. He’s just under the age threshold to be considered a rookie, but his .923 save percentage and five shutouts over 33 appearances was some inspired work. Merzlikins helped the Blue Jackets at a time when their season could have just as easily gone off the rails, while also overcoming his own very disappointing first stretch in the NHL. It was a remarkable feat that could be a preview of what’s to come for the suddenly loaded-at-goaltender Blue Jackets.