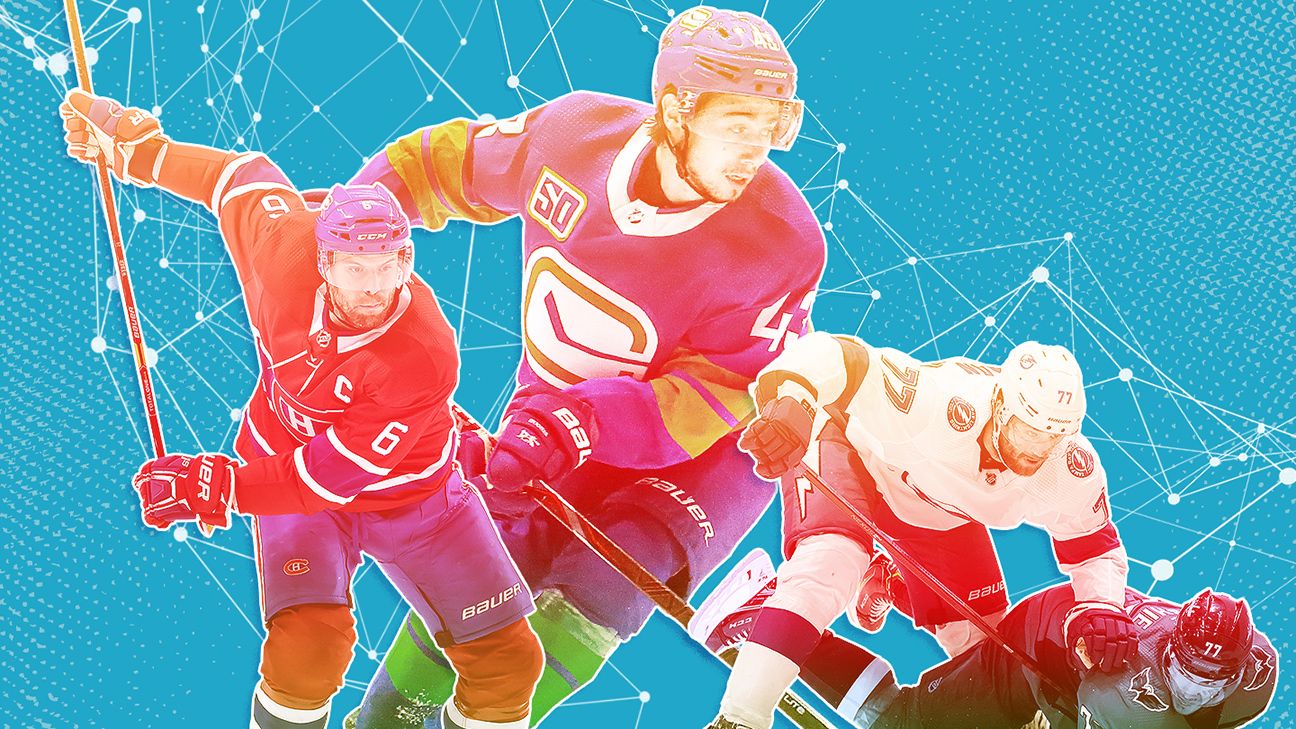 Today’s NHL is loaded with skill and talent up and down the ice. But what would the perfect player look like? Using the attributes of current NHL stars, we set out to create the perfect forward, defenseman and goaltender.

We continue the series here by building the ultimate defenseman from 16 different skills and characteristics of players around the league. (See our perfect forward here, and check back later this week for our iteration of the perfect goalie).

He is only a rookie, but it’s hard to find another defenseman who is as creative and crafty a skater as Hughes. He uses his edges as well as anyone else in the game today. His ability to change directions and create space is at an advanced level for any defenseman and especially for a rookie.

Going north-south, there are not many defensemen who can skate with the explosiveness Makar has. He gets up the ice quickly and has become a weapon in transition.

He has been the king for a while, and it’s hard to argue with his continued dominance in a specific category. The slap shot has become a little less utilized, but no one does it better or with more power than Weber. According to the NHL’s shot type data, Weber has scored 114 goals via the slap shot since 2009-10. That’s 42 more than anyone else in the NHL has.

New Jersey‘s P.K. Subban has made this a trademark part of his game, but I think the crown currently belongs to Burns. The former forward shoots well in all situations and especially off the pass. I think right shots are typically more adept to the one-timer, and Burns can absolutely let it fly.

Over the past three seasons, Carlson has ascended into the elite of the elite when it comes to production. He has more points than any other defenseman in that span, and he leads in both total assists and primary assists. One of the reasons Alex Ovechkin can’t be stopped from his spot on the power play is because he has an elite distributor at the top of the point. Carlson finished fourth among all players in assists this season, with 60.

The one-time default answer for best offensive defenseman is slowing down a bit, and injuries have stacked up. But one thing that you can’t take away from Karlsson is the way he sees the ice and processes the game. No defenseman has as many as Karlsson’s 468 assists since he entered the league in 2009-10.

There are defensemen who have more points than Josi, but few are more skilled. With Karlsson on the downside of his career, Josi appears to be surging. He’s third among all defensemen with 174 points the past three seasons, and there aren’t many who use the entirety of the ice as well as Josi does.

Range is so important in a defenseman, and Hedman is one of the absolute best in that category. He’s difficult to get around because of his long reach, and his feet are so fast for a man of his 6-foot-6 size. It’s as though he were designed in a lab to be a defenseman.

How does one get to be one of the league’s best defenders without taking a ton of penalties? Anticipation and a good active stick help Slavin. It also helps that he always seems to be in the right place, which makes it easier for him to make good defensive plays. Takeaways is a really weird stat, but Slavin leads all NHL defensemen in that category the past four seasons.

His strength and competitiveness make him so difficult to play against in any of the battle areas, including in the corners or in front of the net. He’s just bigger and stronger than so many of his opponents.

Since entering the league, Jones has had a maturity beyond his years. He’s exceptional on both sides of the puck, which makes him particularly valuable. It seems like only a matter of time before Jones collects a Norris Trophy, given his proficiency in all aspects of the game and the fact that his best years are still ahead of him.

The shutdown defenseman is becoming a much rarer breed, but Hjalmarsson continues to excel in the defensive aspects of the game, from blocking shots to stopping zone entries to defending the front of the net. Hjalmarsson makes up for a relative lack of foot speed with incredible hockey sense that made him a huge part of three Stanley Cups in Chicago and continues to help him shepherd a young team in Arizona.

He’s a mean, physical presence on the ice and has too often bordered on the line of dirty, but there’s no question that Gudas can lower the boom. With Dustin Byfuglien out of the game, Gudas is a defenseman whom opposing teams have to know is on the ice. His 419 hits the past two seasons trail only that of Buffalo’s Rasmus Ristolainen (438) among defensemen.

The art of shot-blocking has become more maligned in recent years. Higher blocked shot totals serve as further evidence that your team doesn’t have the puck. Say what you will about Russell in that regard, but over the past five seasons, he has blocked 932 shots — 102 more than that of the next defenseman.

His career high in penalty minutes in one season is 18, yet he continues to establish himself as one of the very best defenders in the game. Slavin uses his hockey sense and discipline to keep himself out of the box and on the ice, where he averages upwards of 23 minutes per game.

Doughty never holds back, whether it’s in the media or on the ice … and he can be ruthless. In the NHLPA’s annual player poll, Doughty earned 13.4% of the vote for “best trash talker,” right behind Boston’s Brad Marchand and tops among all defensemen. All that’s missing from his commentary on anything Matthew Tkachuk-related is “Mean” Gene Okerlund.