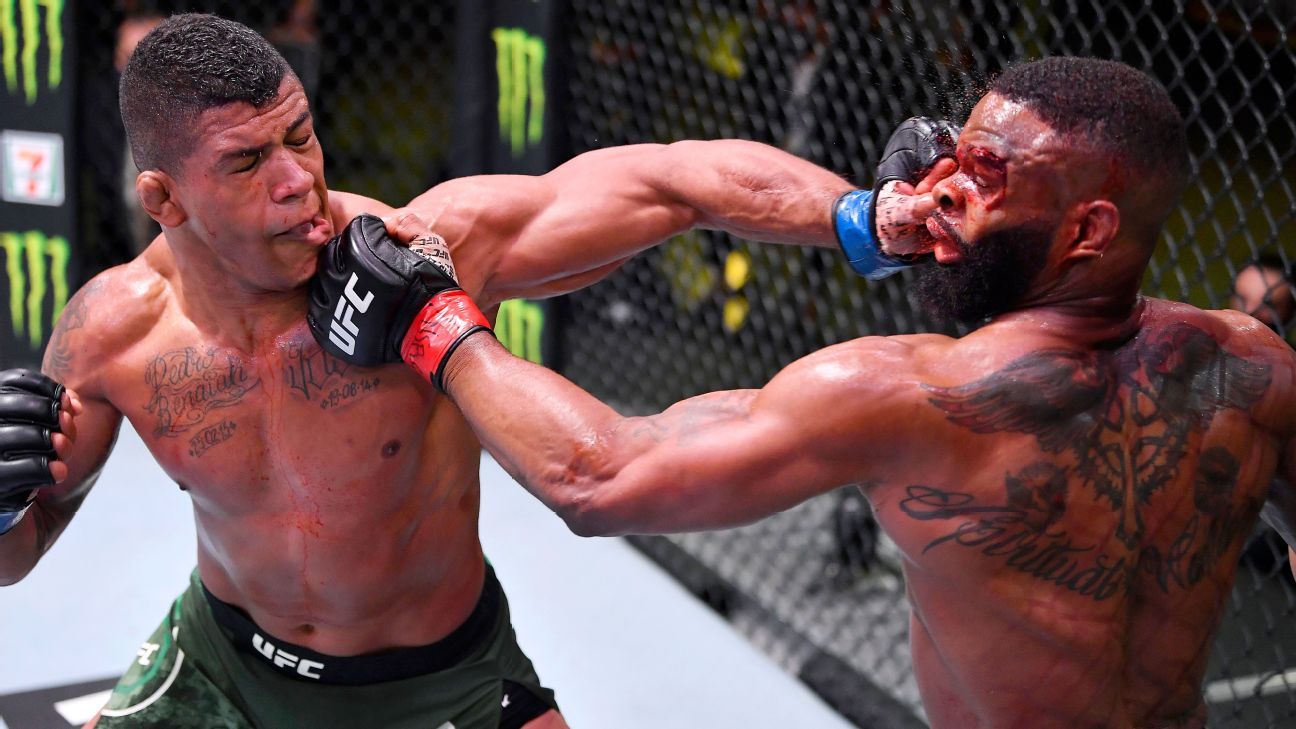 Gilbert Burns is building his case for a 2020 Fighter of the Year award — not to mention a UFC title shot.

Immediately after the result, Burns called for a title shot against his teammate and current champ Kamaru Usman. Is that in the cards for Burns? And who’s next for Woodley after another disappointing showing?

Here’s who could be ahead for Burns, Woodley and two other standouts from Saturday’s card, Mackenzie Dern and Roosevelt Roberts.

Who should be next: Leon Edwards

Champion Kamaru Usman constantly refers to himself as “the boogeyman” of the welterweight division, but man, all of a sudden, Burns and Edwards look like potential boogeymen themselves. Burns is undefeated in the weight class, with four consecutive wins at welterweight. Edwards has been at it even longer, with a current win streak of eight. These two are well-rounded, intelligent, athletic. Not many holes to exploit in either man’s game.

With as good as these two have looked, this would almost have the feel of an unofficial title fight. This is a tremendous potential matchup.

Look, Usman is the undisputed king, and I think we’re all hoping to see him fight Jorge Masvidal next. That’s the fight to make. But with Masvidal talking about a rematch against Nate Diaz, nothing feels certain right now.

Sitting here now, I do think we will see Usman versus Masvidal this summer, but if there’s a hiccup in that, I could absolutely see Burns stealing a shot and getting an opportunity to win his third fight of 2020 with a belt on the line.

Who should be next: Robbie Lawler

After a long run at the top of the welterweight division, Woodley is staring at a two-fight skid and a winless streak of 20 months and counting. What could get him back on track? A trip down memory lane, against the man he took the UFC belt from back in 2016.

Lawler was the welterweight king when Woodley knocked him out in just 2 minutes, 12 seconds in their title fight. There hasn’t been a huge clamor for this rematch, but it would make sense now. Lawler is looking for a relevant fight, and he’s still relatively highly ranked despite losses in four of his past five fights.

Quietly, Neal is has established himself as one of the scariest fighters in the division. He might be the next Gilbert Burns, quite frankly — a guy who is flying somewhat under the radar at the moment, but is probably only one or two signature performances away from cracking into the top five.

Woodley has now lost every round of his past two fights. He’s not in a position to pick opponents. If the UFC calls his number and wants to book a fight against Neal, he might have a hard time turning it down.

Who should be next: Khama Worthy

The UFC is high on the 26-year-old and it’s always been obvious why. Roberts’s frame, speed, confidence — it’s all indicative of some big things, if he can put it all together. He put it all together on Saturday against Brok Weaver, and you saw the results. He looked sensational.

That said, he’s obviously not ready to crack the Top 15. Worthy could be a lot of fun. He’s on a six-fight win steak, and made the absolute most of a short notice UFC debut last year, when he knocked out Devonte Smith in the opening round. These two are entertaining in the cage and outspoken outside of it. This is the one for Roberts.

This would be a heck of a step up in competition, but tell me you wouldn’t love to see this stylistic matchup. Medeiros has taken home five fight night bonuses in his career. He’s currently on an 0-3 skid, although all three of those came against solid competition in Lando Vannata, Gregor Gillespie and Donald Cerrone. Honestly, this might be too much for Roberts, but it would also be a nice opportunity for him to shine against an opponent with a name and a reputation for exciting fights.

Who should be next: Randa Markos

First word that comes to mind when I think about Dern’s progression from here: slow. Keep it slow, for as long as possible. Do not rush this 27-year-old. She has a winner’s mentality, she’s obviously very gifted on the ground, she’s fearless, and she’s a talented enough athlete to turn into something really special. Rushing her, in terms of competition, could really disrupt that.

The fact is, however, the UFC probably won’t be able to keep it slow for long. If Dern wants to fight frequently (which she said she does), and she continues to win, there just aren’t a lot of relevant options at 115 pounds for her to fight, except for opponents with a lot more experience.

Markos has been in the UFC since 2014 and has 38 rounds of UFC experience, compared to Dern’s eight. But Markos, stylistically, is a decent matchup for Dern. She doesn’t have a lot of power in her striking. She’s a step up, but a very manageable one, which is what Dern needs.

Maybe the UFC will get intoxicated with Dern’s potential and find her someone ranked in the Top 15, but again, I just think that would be a mistake and I’m betting the UFC does too. Martin only has one fight in the UFC, but she’s a Dana White Contender Series alum and 6-3 overall. She’d be an appropriate opponent for Dern.

Florida doctor’s arrest a bittersweet moment for the voice of Hockeytown
LeBron out vs. Rockets; Lakers cite sore groin
Ranked 589th in salary, Lamar Jackson focused on rings and not riches
Ohtani shut down as pitcher; day-to-day as DH
Brady: Terminology in new playbook a challenge