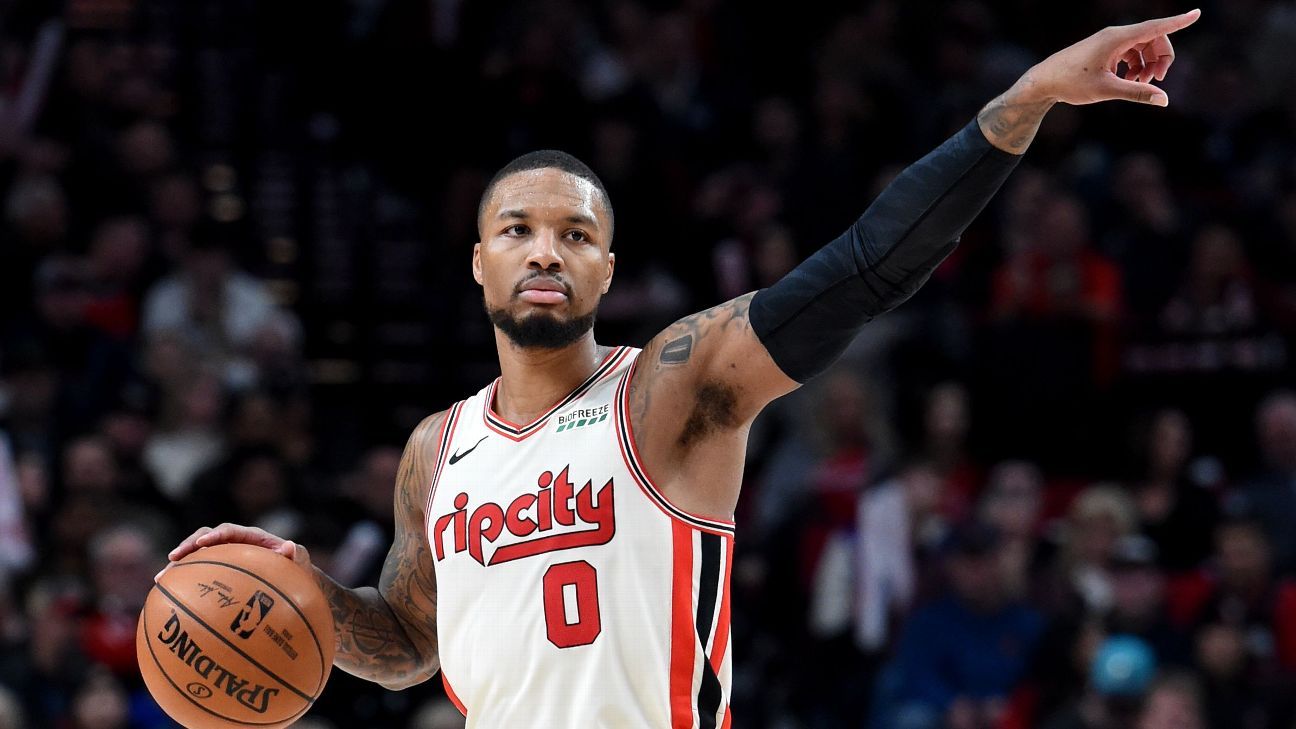 Portland Trail Blazers star Damian Lillard believes a play-in tournament for teams on the outside of the playoff picture “would be perfect” as the NBA considers its options in regard to which way it wants to potentially restart its season.

“I feel like a play-in tournament would be perfect, just because we actually were in striking distance and also had enough games to get in the playoffs,” Lillard told ESPN’s Jalen & Jacoby on Wednesday. “But to that point, if they did decide that we’re just gonna go straight to the playoffs, obviously we would all be disappointed.

“… We haven’t performed to be in that top eight. So if that’s the case, then fine. But if we’re gonna just come back to play games, I feel like that’d be harder on everybody else.”

The Blazers were 3.5 games behind the Memphis Grizzlies for the final playoff spot in the Western Conference when the NBA season was suspended due to the coronavirus pandemic on March 11.

As ESPN’s Adrian Wojnarowski and Zach Lowe have outlined, one of several ideas the league has discussed revolves around a possible play-in tournament for teams like the Blazers that are close to a playoff berth.

Lillard’s comments came a day after the All-Star told Yahoo Sports that he would not play in “meaningless” games if the Blazers don’t have a chance to make the playoffs. He tried to soften those comments Wednesday.

“I mean, I felt like the way the story was written, it was taken out of context, because it was a casual conversation,” Lillard said Wednesday. ” And it was like ‘expletive this, expletive that,’ but it wasn’t a demonstrative statement.

“I was just saying we’ve been off for two months, and if we come back, we want to play for something. So after this type of break, usually when you come back — especially with how fast we’re gonna be jumping into playing — I think guys are at risk for injury, also at risk of being exposed to whatever, because none of us have been around each other, if so many teams are gonna be in one spot.

NBA commissioner Adam Silver will continue discussing plans with the NBA’s Board of Governors during a virtual meeting Friday, sources told Wojnarowski. The plans revolve around a return to action in a possible bubble scenario at the ESPN Wide World of Sports Complex at Walt Disney World in Lake Buena Vista, Florida.

Lillard said he feels like other players — especially those on teams with no chance to secure a playoff berth — may share a similar perspective to his.

“One of the reasons I haven’t [heard] from any other players, possibly other guys that feel the same way,” Lillard said. “They want to play for something, and some people might be looking at it like, ‘it’s almost summer.’

When asked what he would need to feel secure inside a bubble environment, Lillard made it clear that he would support any idea where the league deemed it safe enough to play.

“If they say we’re gonna go do it, I’m prepared to go do it,” Lillard said. “I think if they’re saying that, they’re putting us in an environment that’s as safe as possible. I think that’s all you can ask. I don’t think we would be any more at risk than we are in our everyday lives, going to the grocery store.”

No matter which team were to come out on top in a possible bubble scenario, Lillard does not believe the eventual champion would have an asterisk in the record books as some have suggested.

“I don’t think so,” Lillard said. “[If] something took place or whatever happened and we end up winning, I’m not gonna lose no sleep if we win. They’re gonna be like, ‘We won it.’ We were all playing under the same [conditions].”