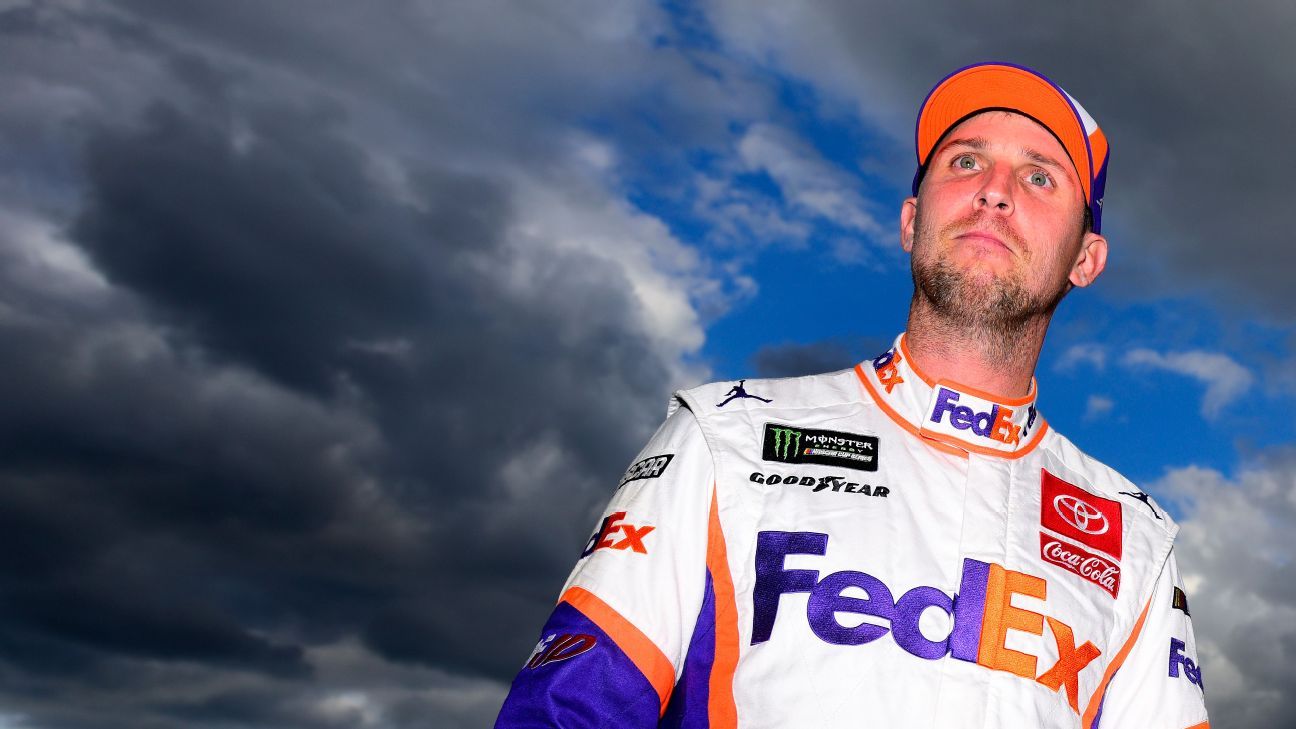 CONCORD, N.C. — Daytona 500 winner Denny Hamlin had his shot at winning another crown jewel event Sunday night destroyed before the Coca-Cola 600 even began.

A piece of tungsten flew off of Hamlin’s car during the pace laps at Charlotte Motor Speedway and Hamlin had to return to pit road to have the weight put back into his Toyota.

Hamlin was eight laps down when he was finally able to join the race. The penalty for tungsten coming off a car is a four-race suspension for the crew chief, according to NASCAR’s rule book.

“Let me know when it’s the point of ‘no return’ and we can just go home,” Hamlin said.

“Nope,” replied crew chief Chris Gabehart. “We can’t do that.”

The tungsten in question weighs 35 pounds and costs $1,877 from the supplier. If it comes off a car during competition, it can cause serious damage if another vehicle hits it. The ballast is added to meet NASCAR’s minimum-weight requirement and if it becomes separated from the car it is an automatic four-race suspension for the crew chief.

NASCAR got the race started and ticked off 49 laps before rain brought out the caution. The cars were brought to pit road and covered one lap later when rain picked up and the race was red-flagged.

Kurt Busch started from the pole and was still leading when the rain began at the only event on the biggest single day of auto racing.

The Sunday before Memorial Day is a supposed to be a smorgasbord of motorsports that begins with Formula One at the Monaco Grand Prix, then IndyCar and the Indianapolis 500, followed by NASCAR and its longest race on the calendar.

The coronavirus pandemic has wiped out the first part of F1’s schedule and, like IndyCar, it is still waiting to start its season. Roger Penske, the new owner of Indianapolis Motor Speedway, has moved the Indy 500. It marks the first time since 1946 the 500 is not being run on Memorial Day weekend.

NASCAR was able to go forward for its third Cup event in seven days under a health plan approved by state officials that allowed the sport to resume after a 10-week hiatus. NASCAR ran three events in South Carolina, and the Coca-Cola 600 kicks off four consecutive days of racing at Charlotte.

Team owner Chip Ganassi would have been at Indy early Sunday celebrating his 62nd birthday at the 500 before jetting to Charlotte Motor Speedway to watch his two NASCAR teams. Instead, the owner watched on television from his home in Pittsburgh as Busch ran a lap at 181.269 mph to earn his first pole of the season and third top-10 start of 2020.

Matt Kenseth, in his third race since Ganassi pulled him out of retirement, qualified fourth in a strong start to the day for the organization.

Tyler Reddick was fifth for Richard Childress Racing, one spot ahead of teammate Austin Dillon as Chevrolet drivers took the top six spots in qualifying.

NASCAR did report any issues with health screenings and all drivers were able to qualify ahead of the 600.

Charlotte Motor Speedway invited team owners to watch the race the race from its 13,000-square foot member’s only restaurant, The Speedway Club. A track spokesman was unaware of any owners accepting the invitation. Most did not attend the first two races back at Darlington Raceway and unless they have a central race-day role, NASCAR has discouraged them from using one of the 16 allotted roster spots per car.

Charlotte Motor Speedway does have a tower of 52 privately owned condominiums that overlook the first turn of the track. Team owner Richard Childress owns a condo but a track spokesman could not confirm Childress planned to watch the 600 from there. Condo owners were allowed five people to enter their condo during the race.

Track officials treat the 600 as an elaborate tribute to the military and fallen heroes but most has been scrapped as spectators are not permitted to attend NASCAR races just yet. NASCAR President Steve Phelps told The Associated Press he did not think spectators would be at races at least through Talladega on June 21, the last race posted NASCAR’s current revised schedule.

NASCAR has squeezed 20 national series races onto the calendar between Talladega and the May 17 resumption at Darlington Raceway.