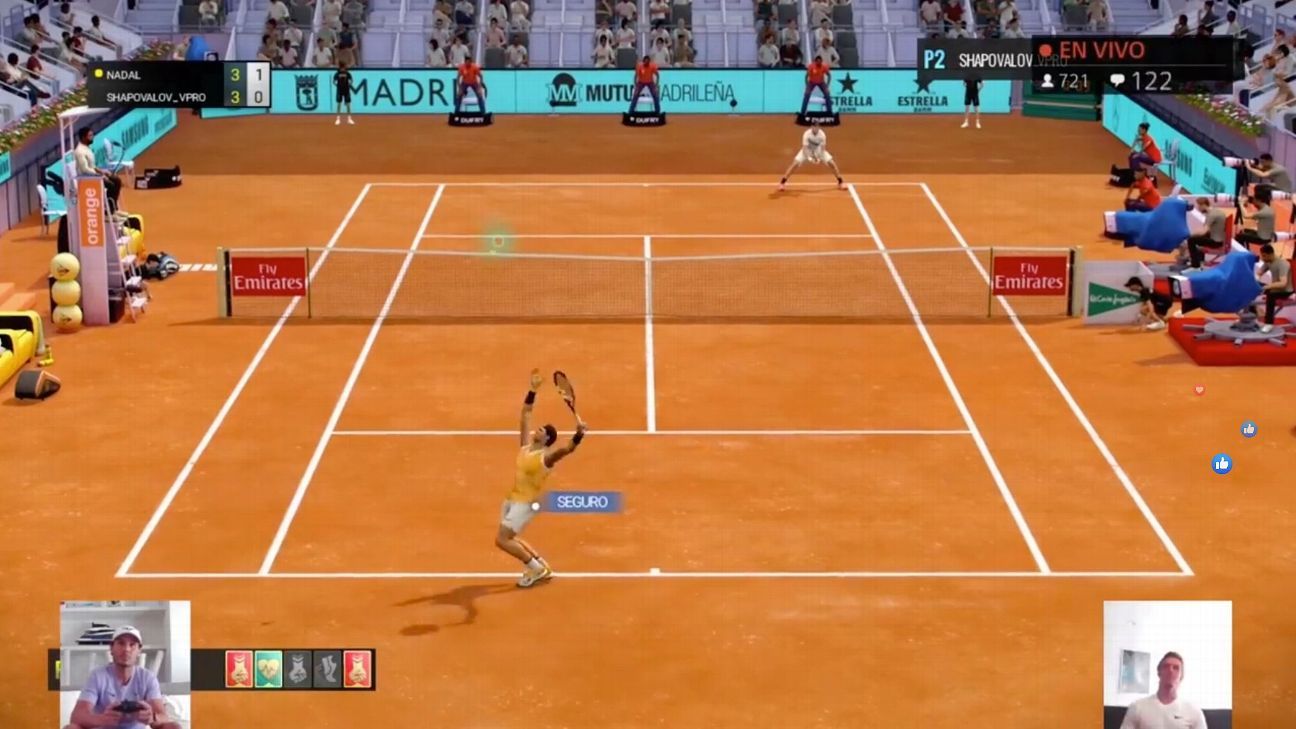 Eugenie Bouchard came out strong over Donna Vekic in their Mutua Madrid Open Virtual Pro round-robin match on Monday, with the Canadian blanking her opponent in the first game and trailing 0-15 in the second.

Then she was disconnected.

Vekic saw a message on her screen that declared her the winner. She couldn’t believe it.

“Yes! I won one point but I won the match,” she said laughing, as thousands of fans watched on a livestream and on Instagram.

It wasn’t exactly the tournament conditions the two WTA stars were used to. But with the tour temporarily suspended through at least July due to the global coronavirus pandemic, the four-day-long tournament might be as close to real competition as they’re going to get these days. Organized by officials at the actual Madrid Open, a clay-court leadup to the French Open, the virtual tournament featured 16 women and 16 men in two separate draws playing Tennis World Tour on PlayStation from the confines of their living rooms.

Bouchard and Vekic — separated physically by over 6,000 miles, a desert or two and the Atlantic Ocean — attempted to play their match again later but encountered the same result. Both later admitted it was a little frustrating, but ultimately it didn’t detract from the big picture.

“This event allows all of us, those of us playing and those watching at home, to feel as if we’re part of something and part of a community,” Bouchard said between matches on Tuesday. “It’s a nice way to stay in touch and feel like you have something going on. Of course, the best part is that it raises money for charity, and we’re hopefully giving the fans an experience and a live event they can watch.

“And, I mean, this is the first competition I’ve had in anything in months. So it doesn’t feel real, but it feels as close to real as you can get right now because it’s on an international stage and people are watching. The games are really competitive, and that’s what makes it so fun.”

The tournament began with round-robin play on Monday. Players faced off against the three members of their groups. Two players from each group advanced to the quarterfinals, which were played on Wednesday, with the semifinals and finals on Thursday. Ultimately Kiki Bertens (who was the champion of the real event in 2019) and Andy Murray emerged victorious, and both earned 150,000 euros to donate to tennis players outside of the top 100 who are struggling financially during this unprecedented time.

“The real Madrid tournament is one of my favorites, and I just really wanted to be a part of this,” Vekic said following a match on Tuesday. “It’s a great initiative, and I hope more things will come out of this. We’ve been having some technical difficulties, but I think that’s just because so many people are trying to watch and trying to connect with this.”

Between the many fans trying to watch and players having to rely on their own internet connection, Vekic and Bouchard’s malfunctioning match wasn’t exactly an outlier. The tournament was marred by technological woes. Several matches were delayed due to failed connections. Both Dominic Thiem and Karen Khachanov were never able to connect over the first two days of play and ended up forfeiting all of their matches. Rafael Nadal, known for his dominance on clay, missed his first match for what tournament director Feliciano Lopez joked was a back injury. An interview on the livestream with John Isner, which he seemed to believe was audio only, resulted in viewers seeing his ear for its duration. Gael Monfils withdrew on Sunday due to conflicting rights between streaming platforms.

When everything was running smoothly, the event provided some fun, competitive matches featuring some big name stars lamenting over missed points and talking a little trash. Most of the players said they had been practicing heading into it, but it was clear from the start some were more comfortable with the game. After Murray remained undefeated with his win over Alexander Zverev in the quarterfinals, the noted gamer jested, “I’m just much better than the other guys. That’s the reality.”

He may have been kidding, but American Frances Tiafoe, who went 0-3 in the opening round, knew he didn’t stand much of a chance against players like Murray or Kei Nishikori, whom Tiafoe lost to on Monday. Still, he was excited to participate.

“I was playing a lot for a couple days coming into this, but I’m just not much a gamer in general,” he said from his home in Washington D.C. “I was nervous to play Kei because how many people would be watching, and I didn’t want to totally embarrass myself. But he killed me out there, so that was embarrassing, but it was a good experience. It was like blink and then it’s over, he was just too good for me.”

Despite his early exit, the 22-year-old still provided some of the tournament’s most entertaining moments as he grunted loudly for every point and made animated noises as if he was on the court in a real match. “You’ve got to grunt to let people know you’re giving it your all,” he said jokingly.

It was clear how badly many of the participating players were missing competition throughout the event. Belinda Bencic filmed her walk-in to her living room ahead of her first match.

The @mutuamadridopen Virtual Pro PS4 Game “Walk In” into my living room😄 #playathome PS: my match is in 10min 😅 pic.twitter.com/Zm4V4iETqp

Bianca Andreescu showed her warmup ahead of her match on Tuesday. Others, like Kristina Mladenovic, dressed in what they would have worn for the clay-court season.

Getting ready for day 2 of the virtual @MutuaMadridOpen 🎮 (still memorizing the tactics🙈🤣)
At least I get to wear my beautiful @adidastennis dress for the occasion 🥰
I hope I will be able to wear it at @rolandgarros this year ! #hometeam pic.twitter.com/aXkFsbIKkf

While playing from the couch isn’t exactly a replacement for the real thing, it certainly brought out of the competitive fire for some players. During her match against Elina Svitolina, Victoria Azarenka showed flashes of her trademark fiery on-court demeanor. She hit her controller, much like a racket, on her leg, jumped out of her chair for big points and said a certain word F-word more times than one could count (seriously, we lost track). It was vintage Azarenka.

More importantly, it provided some sense of normalcy for the 32 players who have had their globetrotting lives all but halted with no firm end date in sight. Bouchard, who was eliminated in the group stage, has spent her unexpected downtime learning Spanish and taking college classes online. She recently completed an online course at Harvard on neuroscience.

“I’m kind of a nerd,” said the 26-year-old. Currently located in Las Vegas, the tennis courts were closed by Nevada state order, but Bouchard’s hopeful they will be open next week.

Vekic, 23, says she hasn’t spent this much time in her native Croatia since she was 10 but has loved getting to spend time with her family and lingering over her morning cup of coffee. She has been trying to learn French and baking with her mom and grandmother almost every day. She’s most proud of their chocolatey banana bread.

“I know, I know, everyone is making banana bread,” she said. She’s been grateful for the group chat created for the 16 women participating in the event.

Much of the conversation has revolved around their frustrations with technology. Players who didn’t have a PlayStation were sent one, and putting it together was a difficult task for many.

“We are talking all the time, and it’s great,” said Vekic, who ultimately fell in the quarterfinals to Fiona Ferro. “It’s hilarious. I was staying in touch with many of the girls anyway, but this actually gives us something to do. It’s not just like, ‘Oh, hey, how are you? What are you doing?’

“This is such a nice change. We’ve been talking tactics, or who’s playing who and just how everyone is playing. When someone is playing well, we’re like, ‘Please have mercy on me in our match!’ It’s like a real tournament but a hundred times more relaxed.”

With Wednesday’s announcement of the “Stay at Home Slam” featuring players like Serena Williams and Maria Sharapova playing Mario Tennis Aces for Nintendo Switch this Sunday, it seems virtual tournaments might become our temporary normal until the tour resumes.

Bouchard isn’t scheduled to play in that event, but thanks to the Madrid Open, you might just find her online playing games as the global quarantine continues.

“I know fans are struggling without tennis right now,” she said. “I told people to add my PlayStation name, and I’m playing with fans online. I want to help them have some fun and interact with them. I told everyone on my Instagram story my name, it’s Bouchard_vpro, but then I had to turn off my friend requests during my matches because I was getting so many.

“I got about 2,000 right away and had to restart my PS4 because it made everything glitch. But as soon as I’m done with this tournament, I’m going to turn my requests back on. So if anyone just wants to hang out, and play Call of Duty: Warzone, I’m down.”