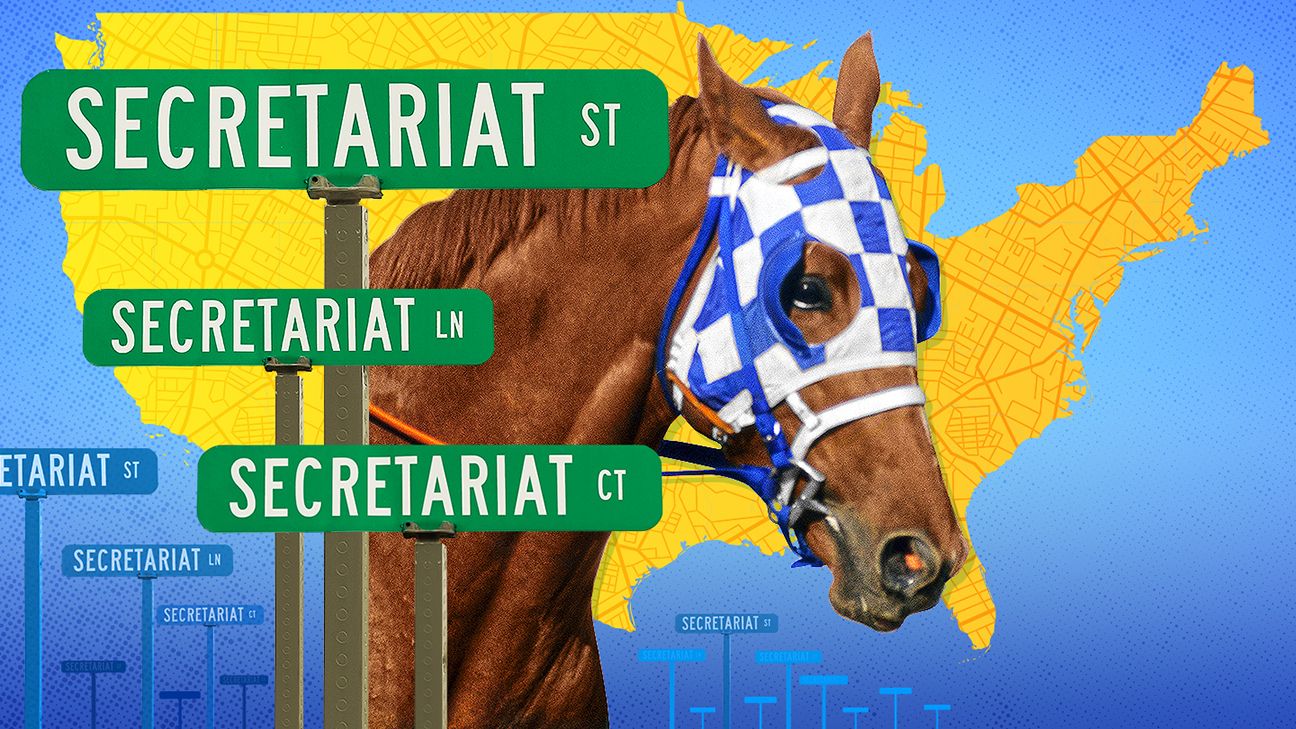 A few years ago, a guy in his late 20s approached famous jockey Ron Turcotte and rolled up his sleeve. Turcotte is best known as Secretariat’s rider, and he was in Virginia that weekend signing autographs and swapping stories for the legendary horse’s birthday party.

Yes, Secretariat might have died in 1989, but there is still a birthday party for him every year in March, near where he was born in Virginia in 1970. There’s also an annual Secretariat fall festival in Kentucky, where he retired and was ultimately buried 30 years ago. There’s an active audience that visits Secretariat.com for other events and news related to the horse. And, of course, there was the successful 2010 Disney movie “Secretariat” (airing Friday, May 1, on ESPN, 8:30 p.m. ET). His iconic life lives on across the country, in unexpected places.

Like that guy’s arm: When he rolled up his sleeve, he unveiled a giant tattoo of Secretariat on his biceps. “Could you sign underneath?” he asked Turcotte. The jockey chuckled, noting that Secretariat died before the autograph seeker was born, then he signed it and went about his business.

One year later, at the next Secretariat birthday party, the same guy walked up and again showed Turcotte his arm … which had added a tattooed Ron Turcotte signature from the year before. “Now it’s complete,” he said.

But perhaps nothing drives home the impact of Secretariat’s life more than looking at a map. Like, any map. We know because we’ve looked at them. All of them. In an effort to identify roads in the U.S. named for athletes, ESPN cross-referenced 2010 Census data with Google Maps. We were stunned to uncover 263 roads named after the horse — far more than for any other athlete, human or otherwise. “I’m not that surprised,” says Kate Chenery Tweedy, whose mother, Penny, raised and owned Secretariat. “Secretariat came along at a time of great crisis in this country — Watergate, the Vietnam War, Nixon’s impeachment. And unlike any other athlete ever has, he restored our sense that there is beauty and good in the world.”

Come on a journey through the strange, far-flung road map of Secretariat’s life, as seen through the many streets (and avenues, and boulevards, and drives) named after the 1973 Triple Crown winner.

Born in Virginia. Won Triple Crown races in Kentucky, Maryland and New York. So it makes perfect sense that the states with the most Secretariat streets are … Florida and Texas? “The only thing I can say is Secretariat’s story had no borders,” says Tweedy, author of “Secretariat’s Meadow.” Check out the entire map to see how much your state loves Secretariat too.

The streets have many names

Not every street is a Street — as in, we found 18 different kinds of roadways named after Secretariat, including one in Gulfport, Mississippi, that required nothing other than the name “Secretariat.” (If you really want to geek out on the difference between a boulevard and an avenue, have at it here.) And the winner is …

People seem to enjoy migrating to the spots where Secretariat enjoyed his biggest moments. So next time you’re in one of those areas, take a look at these key moments from Secretariat’s life … and the nearby street that could offer up a selfie opportunity.

1. March 30, 1970: Secretariat was born in Doswell, Virginia. You can visit his birthplace, which has its own location on Google Maps, and find Secretariat Road just 2.1 miles away.

2. May 5, 1973: Secretariat became the first horse to run the 1¼-mile-long Kentucky Derby in less than two minutes, finishing in 1:59.4, which remains the fastest Derby time ever. Check out Churchill Downs, then be sure to hit Secretariat Drive, a 20-minute car ride away, and go to the end for a sweet little family road portrait. Yep, Secretariat Drive connects in a cross-shaped intersection with a street named after his father, Bold Ruler.

3. May 19, 1973: How fast was Secretariat? So fast that after much disagreement in the immediate aftermath of his Preakness victory on this date, the Maryland Racing Commission convened a special meeting in 2012 that included forensic reviews of the race. The verdict: Secretariat’s original winning time of 1:54.4 on the 1 3/16-mile-long track was lowered to 1:53. Spend a few minutes at Pimlico, then cruise over to Secretariat Court half an hour away in Owings Mills, Maryland.

4. June 9, 1973: The Triple Crown is complete! Secretariat blew past the field in his legendary 31-length blowout victory at the Belmont Stakes. It was such a breathtaking moment that more than 5,000 winning tickets were never cashed so that people could hang onto a paper reminder of the history they’d just witnessed. Grab some dirt from the track as a souvenir, then hoof the 1.5 miles — almost the exact distance of the Belmont track — over to Secretariat Avenue across town in Elmont, New York.

5. Oct. 4, 1989: After retiring to Claiborne Farm in Kentucky, Secretariat died at age 19 and was given the honor of being buried whole — usually only the head, heart and hooves of champion racehorses are buried. Pay homage to Secretariat at his gravesite in Paris, Kentucky, and head an hour and a half southwest to this cool 1.3-mile Secretariat loop in Danville, Kentucky. Google Maps says the loop should take five minutes by car … about twice as long as it would have taken Secretariat!

Oops … but we still love you, Secretariat

Quick, close your eyes and spell the name of the horse you’ve been reading about. Chances are, at least a few of you got a letter or two wrong. But you’re not alone: In Damascus, Maryland, you can take Preakness Drive to Show Pony Place, past Jockey Club Terrace, over to Santa Anita Terrace, to … Secreteriat Court. Yes, that is an “e” instead of an ‘”a” after the Secret part of Secretariat.

In a snowy land far, far away

Road experts say there is little rhyme or reason to the way our streets get their names. It’s mostly just real estate developers who submit names to their town, there’s usually a relatively easy approval process, and voilà. Case in point: Somebody in Butte, Alaska, sure likes horse racing. You can take Sea Biscuit Lane to E. Man o’ War Drive, then hang a right onto E. Secretariat Drive — the most northerly road named for Secretariat. And if you wanted to ride Secretariat the 3,920 miles back to his burial site? At the record 37.8 mph he ran the Belmont in, he’d have gotten you there in a little over four days.