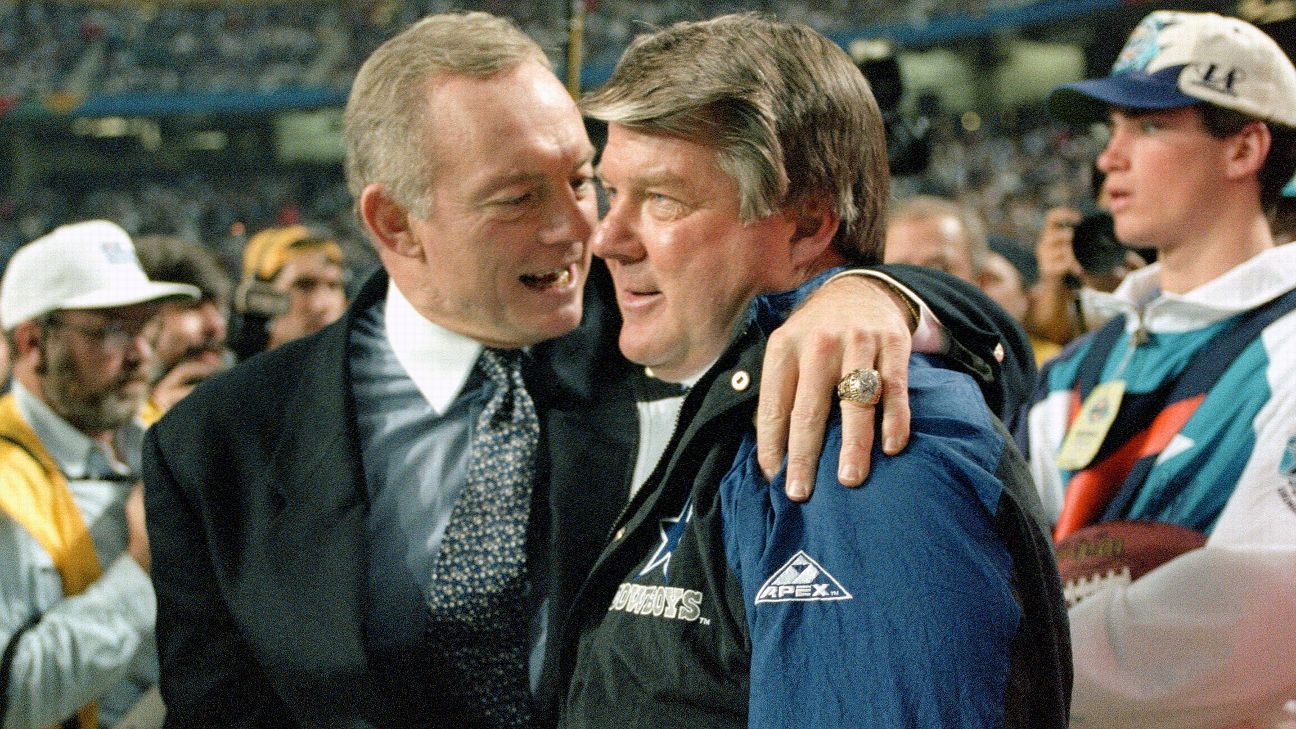 The tears began almost instantly, in part because there was so much history behind them.

Johnson’s smile was permanent. The shock on his face was pure. A day earlier, former Pittsburgh Steelers coach Bill Cowher had found out on live television that Canton, Ohio, had finally called his number. But 20 years had passed since Johnson’s last game and 25 since his final moments in Dallas. Johnson is as charismatic as any coach in NFL history, yet he could barely find the words. The result was an instant classic. The coach who won a national championship and two Super Bowls wasn’t the only one in tears, either.

“This is so special to me because when you put in the work that we put in,” Johnson said during Sunday’s halftime broadcast on Fox. “It’s nice to know people appreciate it.”

Perhaps most surprising was how this tearful induction marked the finest moment in the past 25 years for the Dallas Cowboys, a franchise marred by inconsistency and mediocrity, unable to recreate the success forever synonymous with Johnson at Valley Ranch. The moment was poetic justice distilled, a quarter-century after poetic injustice crippled a dynasty when Johnson unceremoniously left Dallas after a falling out with owner Jerry Jones. That one decision stands as the turning point that has haunted the team, especially Jones, ever since.

The truth is that for an entire generation of Cowboys fans, fandom is more of a family heirloom than it is due to anything the team has done on the field in the 20-plus years since Jimmy’s departure. It is a remembrance of a time when the nickname “America’s Team” carried weight or of a franchise that combined popularity and dominance so seamlessly that its only competition for cultural supremacy was Michael Jordan and the Chicago Bulls. There have been talented teams post-Jimmy — perhaps none more so yet ultimately more disappointing than this season’s team. There has been a 13-3 season here, a 12-4 campaign there and occasional divisional championships. But gut-wrenching playoff losses are the closest the franchise has come to the successes of yesteryear.

Yet revisit Jimmy’s quote. All he wanted was to know that people appreciated him. Cowboys fans love Jimmy Johnson in nearly religious fashion. Cowboys players adore Jimmy Johnson. It was deeply visceral to see Jimmy overcome with emotion and his quarterback Troy Aikman fighting back tears in the booth. Aikman’s Instagram post said that Johnson “made me better, but more importantly, made the Dallas Cowboys better,” and that Johnson, the dynasty’s architect, should’ve been the first of that group enshrined in the hall — before Aikman, Emmitt Smith, Michael Irvin, Larry Allen or, yes, Jerry Jones.

On Jan. 17, 1993, Dallas defeated the 49ers in San Francisco for the NFC championship. Jimmy, addressing his players and coaches, took the Cowboys from NFL contenders to pop culture darlings with four words. “How ’bout them Cowboys!” Johnson proclaimed as the locker room erupted, extending both arms in the air in what has become a legendary image in Cowboys lore. Jerry Jones was in the crowd, pumping his fist twice and almost immediately turning around to exit the locker room. No excitement. No emotion. Is that overanalysis? Perhaps. But it’s also an apt portrayal of how both were viewed: Jerry as the powerful owner in search of more and Jimmy as the exuberant mastermind who found just as much success coaching in the pros as he did in college at the University of Miami.

Sunday evening was a reminder of the times that were and the highs that felt eternal. It was a reminder, too, of what was left on the table. At Johnson’s peak, the Cowboys were as popular as The Beatles, as rebellious as 2 Live Crew or N.W.A. and as beautiful to watch perform as Prince and The Revolution. Sunday evening was also a realization that the franchise’s greatest accomplishments since Jerry Jones purchased the team in 1989 all have Jimmy Johnson’s fingerprints on them. Those contradictions form a potent cocktail of emotions: happiness for Jimmy, frustration over years of heartbreak, anxiety directed at Jerry Jones.

Jones is, without question, one of the most brilliant businessmen in sports history. He purchased the Cowboys nearly 31 years ago for $140 million. Last year, Forbes valued the team as the richest in the world, at $5 billion. It’s largely through Jones that the Cowboys have remained such a pervasive presence, and his influence in the NFL’s most powerful circles is nearly unrivaled. There’s this, too, about Jerry: No one in the NFL yearns for a Super Bowl more than he does. In a way, too, Jerry has always been the bad guy. He bought the team and let go of legendary Cowboys coach Tom Landry. Then Dallas began winning with Johnson, and all the credit went to him. But the same goal Jones obsesses over is one he has helped unravel.

With tears in my eyes I watched my coach @JimmyJohnson get what he so rightfully earned. My Coach has turned men into CHAMPIONS on every level. Congrats Coach and welcome to the @ProFootballHOF !!!!!

How Jerry and Jimmy, college roommates and teammates at the University of Arkansas, ultimately parted ways is both a cautionary tale and unavoidable. Jimmy (deservedly) received a lion’s share of the credit for the Cowboys’ quick turnaround in the ’90s from lottery team to Super Bowl contender. Jerry wanted that same love. In 1991, the Dallas Morning News plastered Jimmy on its football preview edition with the word “Power.” Jimmy reportedly responded to it by saying, “This is going to be a problem.” Jones, allegedly, crashed and proposed a toast at a get-together for former Cowboys coaches that Jimmy arranged in March 1994 in Orlando. Jones stormed away, angry at the cold reception he received, and later told reporters at 5 a.m. in a dark hotel lobby, “There are 500 coaches who could have won the Super Bowl with our team.” Johnson, so incensed by the remark, walked away from the Cowboys seven days later. Since then, the stain of it all has shrouded the team.

To celebrate 100 years of pro football, Peyton Manning travels the country to see the people and places that made the NFL the NFL.
Watch on ESPN+ » More »

The two have mended fences in recent years. Shortly after Sunday’s announcement, Jones released a statement congratulating Johnson. It wasn’t lost on anyone that Johnson entered the Pro Football Hall of Fame before the Cowboys Ring of Honor. In 2014, Jones said Johnson wasn’t inducted because of “disloyalty.” He found solace in the fact that, no matter what, Johnson will always trail him in Super Bowl victories. But the truth takes on many forms, and Jones’ stubbornness shouldn’t be confused for tone-deafness. Kobe Bryant eventually won two championships without Shaquille O’Neal. LeBron James won titles with and without Dan Gilbert. But Jones’ third and final championship, with Barry Switzer at head coach, was won with Johnson’s framework. Michael Irvin, who stormed out of the Cowboys’ practice facility after learning of Johnson’s departure, said in 2017 that the Cowboys could’ve won five or six Super Bowls had Johnson stayed on as head coach.

The most logical explanation is one that has always been the hardest to acknowledge: that too much fame and too much success too soon were always going to end like this. Pride and ego mixing with money, power and the insatiable quest for respect makes for one helluva cocktail — and one helluva hangover, too. A hangover the Cowboys haven’t been able to shake in the 9,423 days since Jimmy Johnson and Jerry Jones sat at a news conference attempting to convince the world that their divorce was amicable.