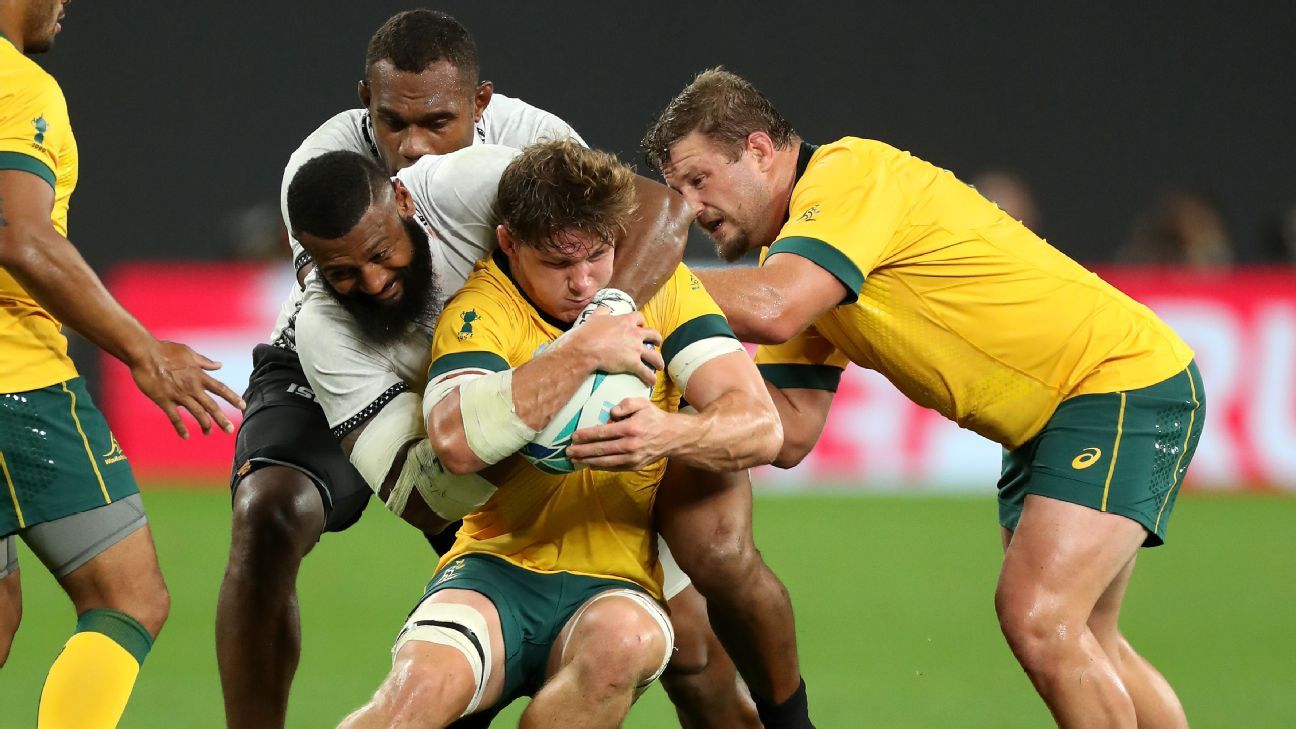 Fiji were never going to be easy-beats but the nature of their physical challenge certainly caught the Wallabies off-guard in their Rugby World Cup Pool D opener in Sapporo.

And the Australians very nearly had their pants pulled down as a result.

The Wallabies needed a calmer, more clinical approach after halftime and with the introduction of some experience of the bench, a few penalties that allowed them to assert their maul dominance and the sin-binning of Fiji’s Levani Bota, Michael Cheika’s side was able to find its rhythm.

At last passes started to stick, runners hit the line at the right time and there was none of the disgraceful brain explosions that had been far too prevalent throughout the first half.

When David Pocock, one of the most experienced Wallabies out there, opted for a quick lineout a mere five metres out from his own line only for centre Samu Kerevi to be immediately swamped and driven back in goal, you knew that this was a Wallabies side with its finger on the panic button.

“We are not looking for perfection, we got tested, and they got us a bit on the hop early on, came out with a lot of aggression, but once we got our rhythm and flow we able to get back in the contest,” Wallabies coach Michael Cheika said in summing up his side’s performance.

“No one intends to go behind and play loose. They came at us on the ground too. I thought they were able to get away with a lot there. Early on their imposed themselves on us and we had to tighten up.”

Referee Ben O’Keeffe was left with no choice but to sin-bin Bota having given the Fijians a collective warning before Tolu Latu scored the first of his two driving maul tries.

During that 10-minute period the Wallabies scored 12 points and effectively killed off the contest against a Fijian side that was starting to tire. Given the explosive start in which they started the match, it was hardly a surprise to see that transpire while the Wallabies were also fortunate to not see winger Reece Hodge earn a yellow card of his own.

Just what becomes of the Australian will play out over the next 24 hours or so after he was on Sunday cited for a tackle that put powerhouse back-rower Peceli Yato out of the game with the concussion.

That could well be one forced Wallabies change but Cheika and fellow selectors Michael O’Connor and Scott Johnson would be wise to consider some others after several players struggled against the Fijians’ early onslaught.

Nic White was caught running a step too far to get a box kick away while Christian Lealiifano seemingly had a Fijian target attached to his back as the Pacific Islanders charged out of the line and whacked him with incredible force early on. Then, in the second-half, Lealiifano threw a poor pass to James O’Connor who promptly spilled it behind him, paving the way for opposite number Waisea Nayacalevu to pounce and run 50 metres for the Fijians’ second try.

Leallifano was eventually replaced on 59 minutes while White’s stint had come to an end some seven minutes earlier, which saw the introduction of veteran scrum-half Will Genia. Both Genia and Toomua appeared to provide the necessary reassurance the Wallabies required.

Genia immediately turned the Fijians around with a kick into space while Toomua was able to play a little flatter up at the line than Lealiifano and the Wallabies’ timing seemed to improve as a result. The try scored by Marika Koroibete, as well as the winger’s earlier break which brought on Latu’s second try, were both sweeping backline movements when the Wallabies backs each ran onto a pass that was out in front of them, at speed.

Of course to overlook the weariness in the Fijian legs at that point and Bata’s sin-binning would be foolish but after lacklustre back-to-back performances from White and Lealiifano, first in Bledisloe II in Auckland and then in Sapporo, it might well be time for a rethink of the Wallabies halves.

Genia’s experience could prove vital in the early exchanges of next Sunday’s crunch clash against Wales in Tokyo, while Toomua perhaps has a greater understanding of northern hemisphere rugby as opposed to Lealiifano through his time at Leicester, though the Brumbies playmaker also had short stint at Ulster a couple of seasons back.

Toomua is also an excellent defender and has a technique that has been honed at fly-half and inside-centre across his professional career. It may have taken some time for him to readjust to first Super Rugby and then, secondly, to life with the Wallabies, but it just might be that the 29-year-old’s big moment has arrived.

Despite his calming influence, Toomua played down his efforts in guiding the Wallabies home, a sequence that also included two of three shots at goal after Leali’ifano and Hodge had earlier lost their radars from the kicking tee.

“I would like a lower number on my jersey for sure,” Toomua said.

“He (Cheika) obviously has ideas in his head along with the other selectors … but I’m not getting too carried away with the last 20 minutes, we were benefactors of the guys starting, who took a fair few hits.”

And then there is of course the ongoing battle debate over whether skipper Michael Hooper and David Pocock should start alongside one another. Certainly in Sapporo Pocock was unable to get on the ball with any real presence while Hooper was his usual energetic self, particularly when he burrowed his way to the line for the Wallabies’ first try.

The Wallabies selectors will want to keep a close eye on just how the Welsh back-row approaches its contest with Georgia on Monday night and just how Australia may be able to counter it. Wales will come to Tokyo Stadium next Sunday posing a far greater lineout threat than the Fijians who gave the Wallabies enough trouble as it was amid a series of thumping hits.

The Wallabies will be grateful for two extra days’ recovery following as a result, so too the selectors who will have extra time to ponder some seriously big positional calls.

This article is powered by Ford Ranger, the vehicle that works smarter and plays harder than the competition.