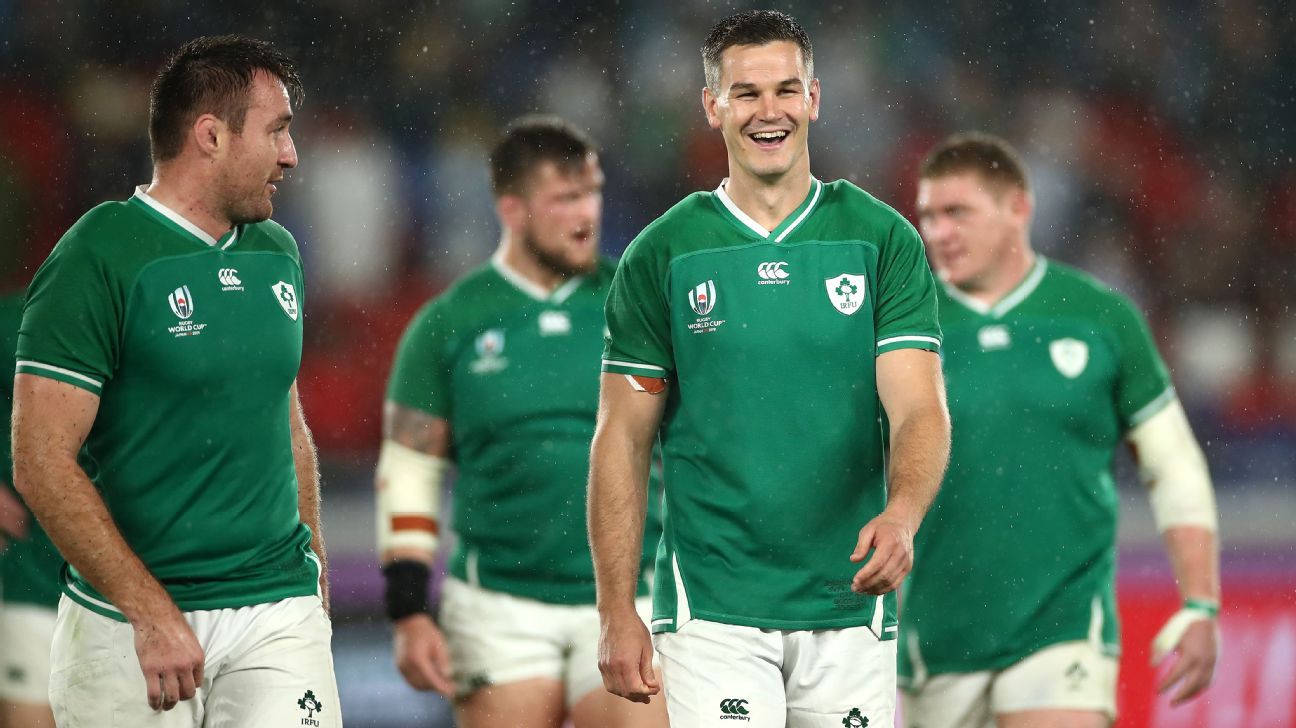 YOHOHAMA, Japan — A tremendous first-half built on forward dominance, set-piece authority and the box-kicking of veteran scrum-half Conor Murray gave Ireland the perfect start to their Rugby World Cup campaign, despite coach Joe Schmidt deeming it not worthy of comparison with the All Blacks and Springboks’ efforts the previous night.

There was just a little bit of luck for the Irish, too, who were, as usual, supported in droves by a travelling legion of green that spilled out from Shin-Yokohama station and up to International Stadium in the hours before kick-off of their 23-3 win over Scotland.

What those supporters witnessed was a performance typical of the Joe Schmidt tenure, a supremely organised game plan that saw his side control proceedings for much of the first half and snuff out the brief moments of Scottish play that did show some promise. Ireland were also ruthless with the opportunities that went their way, and four tries was the result.

Less than 24 hours after the All Blacks had taken care of Springboks, the Irish provided a Rugby World Cup message of their own that will have anyone doubting their claims as potential tournament winners re-evaluating their assessment.

Not that Schmidt thought his side was at the level of either of Saturday night’s combatants.

“I thought it was heavyweight contest last night, and we might be light-heavyweight/middleweight; I don’t know,” the New Zealand said.

Three first-half tries had the Irish up 17-3 at the break, and any thought of a Scottish comeback was almost entirely quashed when the heavens opened while the players were in the sheds.

Ireland’s first-half five-pointers all came from their front five, with James Ryan, skipper Rory Best and Tadgh Furlong rounding out the hard work of the entire forward unit. Ryan’s try was a result of line-splitting surge from locking partner Iain Henderson, while Best and Furlong were the beneficiaries of strong earlier strong set-piece work at the lineout and scrum respectively.

With Murray pulling the strings, Ireland were also exiting their own 22 superbly; the No. 9’s box-kicks chewed off easy metres on the few occasions the Scots did make in down inside the Irish half.

Even when a momentum shift did appear possible, the Scots still found a way to let themselves down.

At one point Jacob Stockdale gifted Gregor Townsend’s side a golden opportunity for an attack when he made a rare mistake by spilling a high ball while backpedaling in defence. But the Scots were instead soon back behind their own goalline after a pass hit the deck; Ireland then toed the ball ahead to receive a fortunate bounce back off the goal-post pad, which allowed the chasing pack to swallow up Finn Russell and force a five-metre scrum.

The post-pad bounce was the luck of the Irish alright, but you still have to turn that fortune into points. And Furlong’s try did just that.

The few times the Scots did threaten in the first half, the Irish cover was there not only to make the tackle but also isolate the ball-carrier and win the decision from referee Wayne Barnes. If it wasn’t that, then it was tackles like that of Stockdale’s on Stuart Hogg that rattled the dangerous Scotland fullback and forced a knock-on.

“They just converted our mistakes into territory and mistakes into points, directly,” Scotland said of Ireland’s game. “When you give them chances in your third of the field, they’ll take them.

“A loose ball in the tackle… they turned the pressure that we had on them into pressure on our line.”

Still, you had to feel a little for the Scots. Even when they did something right, it still went wrong; like the charged-down free-kick that flew directly into touch and gave Ireland a lineout throw.

They then compounded that with more mistakes like the one from a typically pinpoint Murray kick.

With the conditions becoming ever greasier, Murray hoisted the ball high enough to give his chasers just enough time to get there and contest; the high ball proved too slippery for Scotland’s Tommy Seymour to handle, and once the Irish had scooped up mistake. A quick decision to go back down the short-side paid dividends as Andrew Conway turned on the gas, stepped inside one defender and scored to ice the contest.

Job done at 24-3, Schmidt went to his bench. Off came Murray, Sexton and Henderson. No point risking your key men when the result is in the books.

It was at that point that a lone bagpiper could be heard trying to inspire his side into a miracle comeback, but his tune lacked conviction just as the Scottish performance had itself.

Townsend’s side desperately tried to grab a consolation try in the final 15 minutes, but the Irish line wouldn’t be breached — which pleased Schmidt immensely.

“I was delighted with all 23 players,” Schmidt said.

“I think one of the things that sometimes happens is you build a lead and then you lose a bit of cohesion when guys start filtering in and out. But I didn’t really detect that that happened.”

The only real blemish on an otherwise dominant Irish victory was a late yellow card to replacement Tadgh Beirne. But such had been the performance of his fellow forwards through the first 70 minutes that it was absolutely no surprise to see them win a turnover almost immediately followed by a breakdown penalty from Barnes.

The Scots have games against Samoa, who proved they will be no pushovers against the Wallabies a few weeks ago, and then Russia before what may prove to be Pool A’s decisive fixture. That match, against hosts Japan, will bring the curtain down on the pool stage in potentially grand fashion.

Ireland must also negotiate those same three teams but it should be a challenge that provides few hiccups for the men in green. They clearly have bigger fish to fry in this tournament, yet could have asked for few better performances with which to get the ball rolling.

And Ireland don’t need to land that knockout punch for another five weeks, when the heavyweight ring of the final may yet feature Schmidt’s team.